Several clients ship with or are supported by Visual Studio 2005 Team System (shown in Figure 18-1). 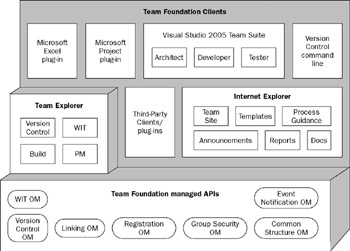 The principal clients are the "role-based" clients of Team Suite that ship with Visual Studio 2005 Team System. These clients are Windows applications that run on Visual Studio–supported platforms. Additional Microsoft client applications have been integrated into Team Foundation Server, including Microsoft Project and Microsoft Excel. Although these clients are integrated into the Team Foundation server using managed add-ins, they can operate independently. One client that is dependent on Team Foundation is the Team Explorer. Team Explorer is a "bare-bones" Visual Studio–based client application for project management and analysis. As pointed out earlier, it provides user and administrative access to work item tracking, reporting, source code control, team project, and build management capabilities of Team Foundation. Team Explorer does not contain the language features and compilers of Visual Studio, or many of the modeling, development, and testing features of Visual Studio Team Suite. It is not considered one of the role-based clients. Internet Explorer can be used as a client to directly connect to the web-based Team Portal and the Team Reports.

The Team Explorer client is targeted at those project leaders and analysts who want access to some or all the Team Foundation Server features but who:

Team Explorer provides the user and administration features of Team Foundation Server. Many of these are described as follows: 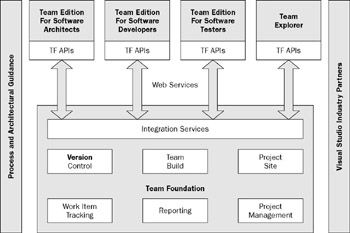 Integration between Team System and third-party components and services can be categorized in terms of user interface integration, process extensibility, and data integration: 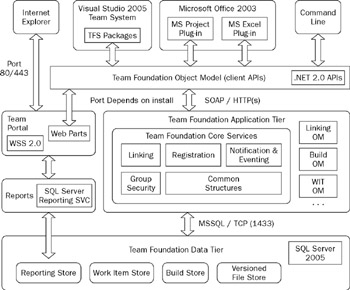 All Team Foundation Data Tier data is managed by SQL Server 2005. This means you can use SQL methods to handle backup and recovery and SQL clustering/mirroring for data tier failover. (Note that for data migration between VSTS product versions, VSTS supplied scripts will be necessary.)

A few of the Team Foundation Core Services are particularly notable:

The goal of Team Foundation Build is to provide a "build a lab out-of-the-box" experience. A conventional build covers many steps, such as cleaning the remote build machine, obtaining the sources from the build machine, compiling the source, running tests against the build, either before or after the build, and communicating the results of the build back to the team. Most build scripts cover these steps, but getting a solid build process up and running reliably is often more of a chore than you or your team would like to face. The poor integration of the tools involved in this build process often results in a weak software life cycle experience.

The Team Foundation Reporting Warehouse is a conventionally organized data warehouse where data from third-party tools and Team System plug-ins (e.g., version control, WIT, builds, testing tools) can be stored. Data from these tools and plug-ins is published, either manually (for test data) or as part of an application tier Team Foundation services, to a number of relational databases, located on the Team Foundation data tier, called operational stores. These operational stores are optimized for online transaction processing and have names like TfsVersionControl and TfsWorkItemTracking. Periodically, data is pulled from these stores through warehouse adapters. Each operational store has its own adapter whose task is to transform and publish data in a standardized format to a relational database, called the Team Foundation Relational Warehouse (TFSWarehouse). On top of the Relational Warehouse is an OLAP cube that further aggregates the data for end user and prebuilt reports.

A number of tools can be used to build reports from this cube. Microsoft Excel can be used by project managers to access the cube directly and build ad-hoc reports, possibly for exploratory analysis. Report Builder is a tool that comes with SQL Server 2005 Reporting Services. It can be used to create reports by dragging and dropping OLAP fields onto a design surface. For specific layout and formatting requirements, the Report Designer tool from Visual Studio 2005 can be used. This tool allows you to interactively design a report by using data from Team Foundation as a data source. The Team Foundation Reporting Warehouse architecture is shown in Figure 18-4. 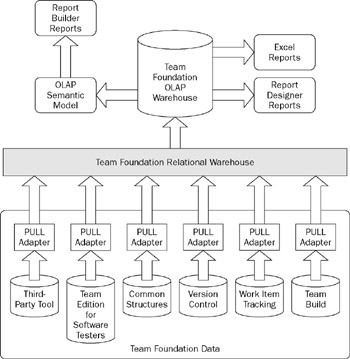 The operational stores are organized in a star schema with an OLAP database that draws from the Relational Warehouse schema. A star schema is the simplest data warehouse schema that can be used. At the center of this schema is a "fact" table that lists the core facts that make up the Report query. Each fact is composed of the following: dimensions, used to slice the data in a report; measures, things that are counted or aggregated; and details, the columns that appear in the relational table.

The Reporting Warehouse uses a single OLAP cube with a measure group per fact to assemble the data from the star schema. Examples of measure groups are Work Item History, Test Results, Code Churn, and more. This enables reports drawn from the aggregation of data to end up being simple selects. For complex queries, an answer can be produced in OLAP in about 0.1 percent of the time it takes for the same query on relational data.

The Reporting Warehouse architecture enables each Team System tool to submit data to the warehouse schema and transform the data. For example, when a load test is run, the results are published to a local results store (e.g., SQL Server Express database). The user can elect to manually publish these results (assuming the user has installed Team Foundation Client) to an operational store. This store has a schema that reflects the type of data the Team System load test tool generates. A Reporting Warehouse service on the application tier (called TFSScheduler) periodically sweeps the data stores every hour (by default) and tells the Warehouse Controller service to run adapters. Each of the registered warehouse adapters are then engaged by the Warehouse Controller service through methods on the IDataAAdapter interface. These adapters, represented by managed code running outside of SQL 2005, filter, transform, and move the data to the Team Foundation Relational Warehouse. For example, the LoadTest adapter provides the Team Foundation Relational Warehouse with an "average" of all the counter metrics collected by the operational store. 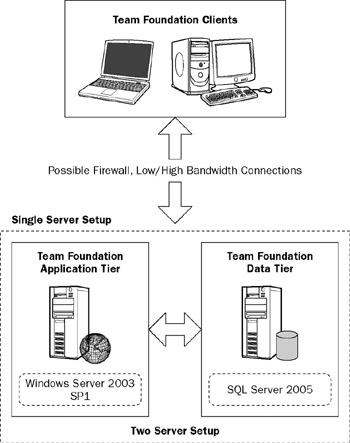