After you get the IDE set up the way you like it, take a look at the VS .NET macros. Many developers never discover (or never use) this facet of VS .NET, which is a shame. One of the things that separates the beginning coder from the seasoned developer is an attitude toward repetitive work. This applies not just to writing code but to performing repetitive actions in the IDE as well. Perhaps you need to apply a comment with a copyright notice to the top of every code module. You could do this using cut and paste, but there’s an alternative: VS .NET lets you record and replay macros, collections of actions that can simulate almost anything that you can do with the mouse and keyboard.

If you’ve used macros in Microsoft Word or Excel, or worked with Windows Scripting, you should have a pretty good mental model of macros. A macro, in this case, is a series of actions saved in a scripting language. The group of actions can be stored and later replayed. The goal of macros is to simplify repetitive work by letting you do just one thing (run the macro) instead of an entire series of things (the actions contained in the macro).

VS .NET includes everything you’d expect from a modern high-end macro language:

Let’s briefly look at each of these facets of VS .NET macros.

Alternatives to VS .NET

Although I’m focused on VS .NET in this chapter (and throughout the book), you should be aware that you have alternatives for developing .NET applications. Depending on your budget, other tools, and needs, one of these tools might be right for you.

VS .NET makes it extremely easy to get started writing macros. That’s because it includes a macro recorder that lets you create a macro simply by carrying out the actions that the macro should contain. After you’ve launched VS .NET and loaded your project, follow these steps to record a macro:

To prove that the new macro works, you can test it out. Open a new code module in the editor, and then select Tools

Run Temporary Macro. VS .NET will add the copyright notice to the new module.

Recording macros is simple, but sometimes recorded macros will need a bit of cleanup to be really useful. The tool for doing this cleanup is the Macro Editor. To see your new macro in the Macro Editor, follow these steps: 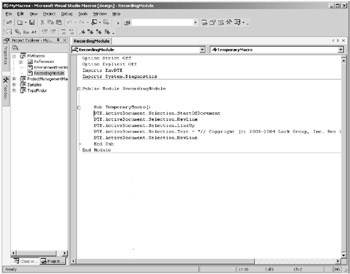 Here (slightly reformatted) is the code that the Macro Recorder produced for the copyright macro:

As you can see, VS .NET macros are written in VB .NET (even if they’re recorded in a C# project). The DTE (design-time environment) object is the root of an object model that encompasses the entire VS .NET IDE. This object model is far too complex to explain in detail here, but you’ll find it documented in the VS .NET help files (look for the “Common Environment Object Model” section of the documentation).

Your new macro project will now be loaded every time you launch VS .NET. If you want to stop this automatic loading, you can right-click the macro project in the Macro Explorer and select Unload Macro Project.

Macros from the Keyboard

Now that the macro is permanently loaded, you can make it easy to run by binding it to a keystroke combination. VS .NET lets you attach any macro to any keystroke through its Options dialog box. Follow these steps to bind the macro to a key combination:

Now you can add the copyright comment to a new module with the press of a few keys.

Database Modeling with MicrosoftВ® Visio for Enterprise Architects (The Morgan Kaufmann Series in Data Management Systems)
Strategies for Information Technology Governance
Java How to Program (6th Edition) (How to Program (Deitel))
An Introduction to Design Patterns in C++ with Qt 4
Oracle SQL*Plus: The Definitive Guide (Definitive Guides)
What is Lean Six Sigma
Quantitative Methods in Project Management
flylib.com © 2008-2017.
If you may any questions please contact us: flylib@qtcs.net
Privacy policy
This website uses cookies. Click here to find out more.
Accept cookies