Far too often, project managers take a narrow perspective when managing their projects. This narrow perspective can lead to reacting rather than responding to events and having little foresight about the consequences of their decisions and actions. To some degree, this is due to the prevailing paradigm of project management that emphasizes a mechanical view of how projects operate . Seasoned project managers recognize that a narrow perspective is not only na ve, but can cause unintended complications later in the project life cycle and beyond. So they emphasize the need to develop and maintain a wide-angle view of a project by looking at relationships; emphasizing interrelation, interdependence , and integration. In other words, they mean systems thinking. Fritjof Capra says that systems thinking is really process thinking, whereby opposites and relationships interrelate and interact in a unified manner. [1]

The new paradigm of project management requires that project managers take a more realistic view of projects, thereby avoiding a paint-by- numbers approach. The emphasis shifts to viewing projects as dynamic systems, relying as much on relationships as well as tools and techniques.

Unfortunately, a systemic approach towards managing projects is rarely taken, resulting in many problems and complications.

It limits perceptions and possibilities. By thinking linearly under the prevailing paradigm, project managers find themselves locked into looking for or seeing the right answer rather than what I refer to as an appropriate solution. The difference is that the former may be based on logical correctness but does not satisfy a need, e.g., a technical solution that fails to satisfy the needs of the customer. The latter might be a workable solution not based on logical correctness but provides a realistic, satisfactory answer. A systemic, not systematic, view, therefore, allows project managers to do the right things, not necessarily to do things right.

It causes project managers to react rather than respond. A systemic perspective does not enable project managers to anticipate the "upstream and downstream" impacts of decisions and actions and have some foresight about what can happen next , positive or negative. Taking a typical sequential, linear view often results in making short-term decisions and taking short- term actions to address only a small part of a wider problem. Difficulties can arise later in the project life cycle, and will be more difficult and costlier to address. In The Logic of Failure , Dietrich Dorner observes that increases in the desire to apply linear measures to nonlinear circumstances result in an inability to anticipate and understand what he refers to as "side effects and repercussions " of behavior. [2] An example is a "patch" to a technical issue that may later cause problems during the sustaining and operations of a product.

It can lead to inflexibility in thought and action. Since the prevailing paradigm encourages finding the right logic rather than a suitable answer, mental arrogance , e.g., possessing the only right answer or taking only the right action, can take over. The resulting solution may be incomplete, addressing only one or more symptoms and not the cause. An example is adding more people to a project to recover a sliding schedule.

It leads to focusing on fixing parts rather than dealing with relationships. This situation is very similar to the Newtonian perspective of looking at the universe as a machine. If a problem exists, replace the part. The problem with this approach is that this requires ensuring the availability of parts and asserting that the cause is localized. Often, however, the challenge lies with relationships among the parts, not the individual parts. Many project managers fail to focus on relationships simply because they view a project as an assembly of parts. If a project fails to progress, then the frequently quoted answer is to replace a part rather than improve relationships. An example is a project manager preferring to remove a team member rather than altering the work relationships.

It leads to what Dorner refers to as "Methodism," that is, following the rules of a methodology, procedure, etc. correctly rather than assessing effectiveness. Essentially, the process becomes more important than the results. This approach emphasizes a focus on what must be done and how to do it efficiently . In addition, it leads to a hierarchical, command and control orientation when managing a project to ensure correctness. The result is often dysfunctional behavior and complications, such as negative conflict as well as suboptimization of goals. An example is overemphasis on applying a methodology or technique at the expense of achieving results.

It results in project managers subscribing to a skewed view of a project, e.g., looking at a project from a narrow technical or financial perspective. In addition to subscribing to a fragmented view, it also means taking a stovepipe view, leading to many oversights, misinterpretations, and short-term solutions. An example is a project manager who focuses on managing the costs of a project without considering other factors, e.g., schedule, people, and quality.

It can lead to a lack of acceptance of diversity regarding new or different ideas. In other words, project managers refuse to consider different alternatives or insights that may improve project performance. An example is a project manager who believes in only one "right" way or methodology to conduct a project and who applies a command and control approach as opposed to a collaborative one. The consequences can be seen clearly from a systemic perspective as displayed in Figure 5.1. The command and control style often results in a stream of negative consequences, whereas a more collaborative style often has different consequences. 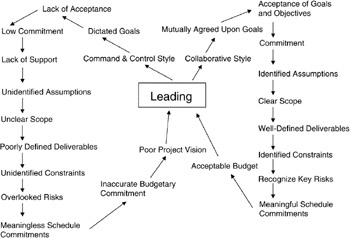