COMTI supports sending and receiving information to and from IMS message queues, as well as sending and receiving information to and from CICS. COMTI also enables CICS transaction programs to participate in MTS-coordinated transactions using Sync Point Level 2 LU 6.2 conversations. Using the distributed program link (DPL) emulation provided by COMTI, CICS applications need not even be aware they are participating within a larger distributed transaction.

Internally, COMTI consists of a set of COM components that interact with each other, with MTS, and with the MS DTC. The COMTI architecture is shown in Figure 6-3. The generic COMTI component exposes the appropriate Automation interface to clients. The COMTI state machine sequences the acquisition of input data, marshaling the inputs, sending the inputs, receiving outputs, unmarshaling the outputs, and delivering outputs back through the Automation interface. A Transport object isolates the state machine from the specific transport being used, and a Convert object isolates it from details of data conversion for the target mainframe. The resource dispenser mechanism in MTS is used to cache instances of the state machine and associated objects to improve performance. The MS DTC coordinates transactions and manages the necessary translation between the transaction identifiers (TRIDs) since MS DTC uses OLE TRIDs and mainframe applications use LU 6.2 logical unit-of-work identifiers (LUWIDs). 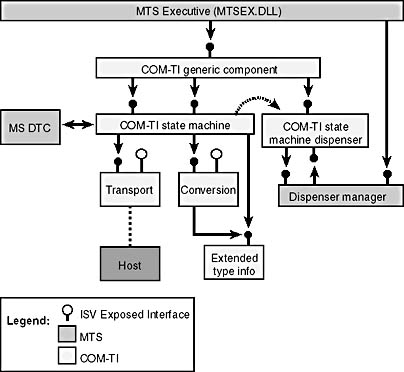 The primary advantage of COMTI is that it makes mainframe applications accessible to Windows-based workstations and servers, using standard Windows development tools such as Visual Basic and scripting languages. Developers do not need to learn COBOL, CICS, or IMS programming to take advantage of existing applications.

From the system administrator's perspective, COMTI does not require any software on the mainframe or client workstations. COMTI needs to be installed only on machines hosting COMTI Automation components.