With literally thousands of features in many modern music programs, how do you decide which software will help you be more creative and productive? There are no easy answers. Since current software offerings tend to blur the boundaries by including features from various categories, you may indeed be able to find one program that will do everything you need. In such a case, you can choose a tool based less on what it does than on how its user interface looks and feels to you. This is largely a subjective matter, however, so instead of getting sidetracked into the " knobs vs. sliders" debate, let's look at the basic capabilities found (in one form or another) in many commercially available music programs.

Multitracking is the recording and editing of multiple simultaneous audio signals. Before digital audio software, you needed multitrack analog tape decks and eventually digital decks for multitracking. Now, multitrack features are found not only in "studio" software as you'd expect, but many other creative music and sound applications as well ( Figure 2.10 ). 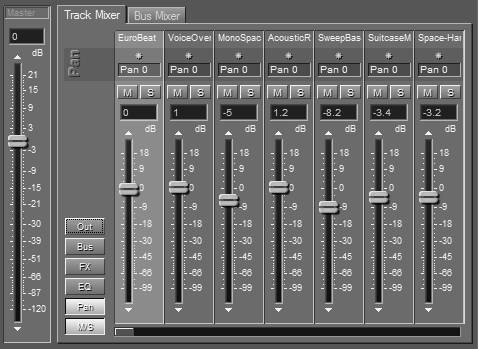 Sequencing is the construction of songs from MIDI, audio, and mix automation data. It's separated here from multitracking because it involves more than just audio.

The term is somewhat misleading because of its history: it's a throwback to vintage analog equipment, which constructed simple patterns out of sequences of voltages. (Does this sound like a tough way to make music? It was!) Sequencing later came to mean, in more general terms, arranging sounds and musical information into songs or mixes , first for MIDI alone and eventually for both MIDI and audio.

A sequencer now means any program with MIDI and audio recording, editing, and arranging functions ( Figure 2.11 ), including programs like Cubase, Logic, SONAR, and Digital Performer. These programs are often called digital audio workstations , but products in that category include many functions besides sequencing, including those found in the next few sections.

Waveform editing , also called sample editing , involves detailed modifications to individual sound files. This can include the ability to edit sound at the level of the individual sample, as well as using other general tools for audio manipulation and batch processing. A waveform editor is to a multitrack editor as a text editor is to a page layout program. Most audio programs provide some kind of waveform editing, whereas others are dedicated entirely to the task ( Figure 2.12 ). 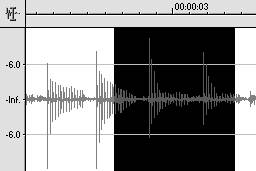 Pattern-based editing, sometimes called beat-based editing , mimics the limitations of primitive drum machines and constructs musical patterns for drums and instruments out of regular metrical patterns ( Figure 2.13 ). This approach naturally appeals to people producing dance music, but because it's simple, easy, and quick, it's useful for sketching quick drum patterns or basslines for other musical genres as well. Since pattern-based features were common on early synthesizers and drum machines, many software instruments include some kind of pattern-based editing. It's also found throughout certain specialized workstation apps.

Pattern-based editing uses loops of musical material, usually in the form of MIDI. Looping refers to tools that loop audio. These applications can modify the tempo and sometimes beat positions of audio samples without changing pitch. Programs like GarageBand and ACID can take advantage of special loop libraries containing hundreds of sampled grooves and instrumental materials. Again, they're indispensable for dance music, but can be used in any musical genre to sketch ideas, create backing tracks, or produce entire songs ( Figure 2.14 ).

You can produce an entire mix without ever recording a note. Synthesis is the creation of sound entirely in the digital domain. Synthesis techniques range from emulations of vintage equipment, like Arturia's painstaking re-creation of the original Moog Modular, to cutting-edge sound creation techniques only possible on the computer, like Apple's Sculpture in Logic Pro.


All software instruments involve some kind of synthesis, but sometimes the term virtual instrument is used to specifically refer to emulations of real-world, nonelectronic instruments ( Figure 2.15 ).

Figure 2.15. Native Instruments' B4 virtual instrument, an emulation of the Hammond organ.

A digital effect is anything that takes an audio signal and changes it in some way, for example, reverbs , acoustic space simulators, delays, mastering, EQ, compression, sound-munchers, weird spacey sound warpers, and whatever else you can imagine. Signal processing is simply the use of effects. As the name implies, it's the processing of a signal. 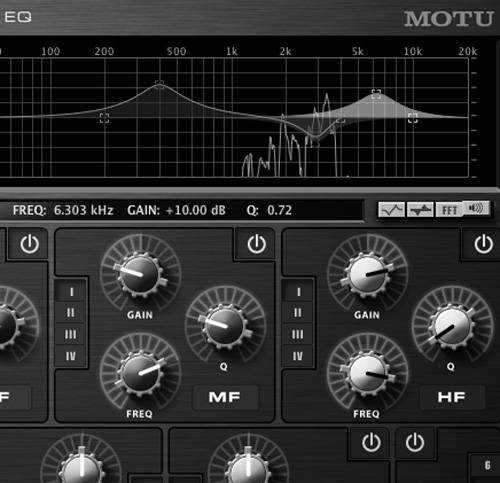 Although it's technically just another form of digital effect, guitar processing deserves special mention. With the aid of software- modeled amplifiers , effects, and speaker cabinet simulation, software guitar processing can do what would otherwise require a lot of external equipment.


Figure 2.17. GuitarRig simulates a rack of guitar amplifiers and effects. 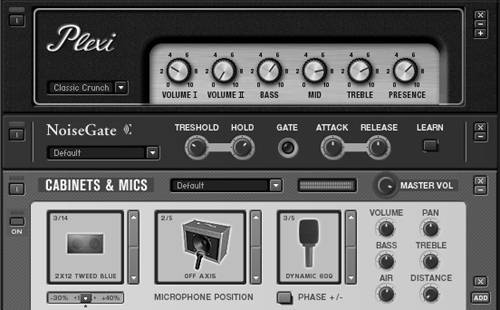 Mastering is a general category of tasks related to preparing music and sound for distribution. It includes effects intended to smooth, sweeten, and balance the sound's dynamic and frequency range, and the process of exporting for broadcast, CD distribution, or Web sharing for a single song or a group of songs (as in an album).


Figure 2.18. You can prepare audio via effects and author a CD in Apple's WaveBurner mastering tool. 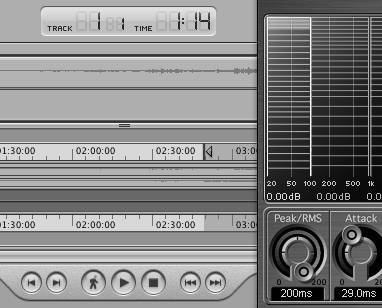 DJs have special requirements, like the ability to manage large libraries of music, cue music by prelistening to it before the crowd in a club hears it, adjust tempo and pitch, and cross-fade between audio signals. Because these same features can be useful to non-DJs as well, general-use applications like Ableton Live have become more appealing to DJs and non-DJs alike. 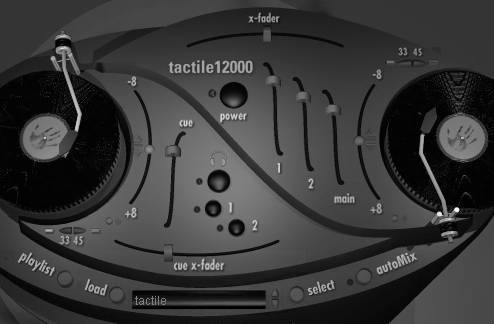 Music notation or scorewriting is the production of printed scores readable by musicians . Music notation usually interfaces with MIDI data, since it's a convenient standard for storing musical information. Although notation features in programs like Logic and Cubase are useful for quick song scores, composers and arrangers require various specific additional features depending on the complexity of their music and the technical requirements of musicians and publishers. 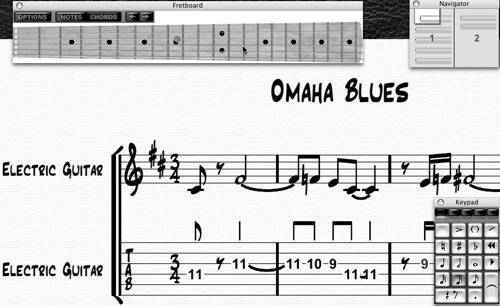 Early synthesizers produced sound by connecting individual components , or modules , with patch cords. The approach was time-consuming but infinitely flexible because each module had just one task, and following the path of a signal was as easy as following the associated cable. Modern digital audio software adapts this method to allow the creation of custom sound and MIDI processing configurations, and interactive control that lets software respond to and control everything from MIDI to audio to live video signals.

Specialized modular and interactive applications include: 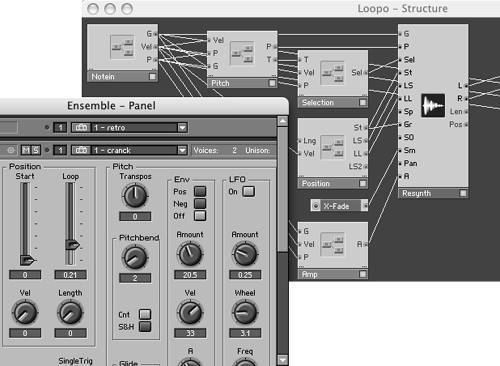 Some applications have specific functions for certain markets. These functions aren't included in general-purpose audio workstations yet, but if they're critical to the work you do, you'll want to check them out:

One of the advantages of software audio production is that it affords nearly infinite flexibility. Since no two users are the same, no two software setups have to be the same. There are two primary approaches: buy an integrated workstation that does everything you need or assemble just the tools, instruments, and effects you need a la carte. Thanks to plug-in technology and other means of integrating software, there's a broad middle ground as well.

A number of applications fit into this general definition of a DAW:

Naturally, it can be difficult to distinguish the differences between applications with deep, overlapping feature sets. The choice is entirely personal: If you visit the studio of any top musician or producer, you'll likely find a wide variety of these applications in use.

Combine software for a custom studio

Developers have devised ways of combining applications, allowing you to build a studio from a combination of software. Audio software fits into one of three categories:


Using a combination of software from these three categories, there are an almost infinite number of possible software setups thanks to common open formats ( Table 2.8 ). As long as you have a host of some kind, whether it's a simple freeware/shareware host or a full-fledged workstation, you can add a la carte instruments, effects, and other tools at will. Even without running a host, you can run a stand-alone application whenever you need it.


The only caveat is that plug-ins must be written to take advantage of a host environment via one of a number of standards: open formats used by multiple applications (VST, DX, AU, and LADSPA); proprietary formats for specific compatibility with a product, like Digidesign's RTAS and TDM; or other host- or hardware-specific formats. Since not all applications support all formats, you may need to use wrapper programs from companies like FXpansion (www.fxpansion.com) to extend compatibility.

Adding Hardware to Your Studio

Many novice users build their initial studio using software to save space and money. That doesn't mean, however, that hardware isn't worth a look for many of the same tasks software performs . Hardware has a number of potential advantages:

In short, hardware is fun to use, and there's no reason it can't be integrated into a computer studio. You can generally control external digital hardware via MIDI and synchronization controls or the more advanced of tools like Apple Logic's Environments. You don't need computer control of everythingoften simple audio routing will work wellbut see the sidebar "Hardware-Software Connections Checklist" for some good questions to ask.

Products to consider include: