The sample application featured is more extensively described in Chapter 15. This section will show you how we'll be implementing some of the use cases mentioned in Chapter 15. Using a simple controller,we'll allow users to view information about a specific show. Also, we'll create a form controller with which bookings can be made, and last but not least, we'll create a wizard-style process to add shows to our box office.

Users can select a show from the list of shows the welcome screen presents them with. The show the user selects will then be displayed along with the performance and availability data. Let's implement an AbstractController modeling this behavior.

Let's first review the workflow the controller will be responsible for:

Step 2 mentions a request. Assume the request to be the following:

First, we'll implement our controller. We'll do this using two possible approaches. The first approach starts with extending the AbstractController. Implementing the template method provided by the superclass is all you need to do.

The following template method will retrieve the show the user selected and return an appropriate model:

We're using Spring's RequestUtils convenience class (located in the org.springframework.web.bind package) to retrieve the show identifier. This is a useful class to use in simple cases where advanced data binding is overkill. If the required request parameter isn't present, the getRequiredLongParameter() method will throw an exception, which you should preferably handle by adding a HandlerExceptionResolver to your application context (discussed later in this chapter).

We could have also chosen to use the ThrowawayController approach to implementing the functionality. The ThrowawayController offers more of a command-style approach in that for each request, a controller is instantiated and populated with the values from the request, after which the controller should have enough information to proceed and return a ModelAndView. The advantage when using these kinds of controllers is that you won't be tied to the Servlet API because all information from the HttpServletRequest is already transferred to the command object (the controller itself) by the framework and no reference to the request itself is given to the controller. This means testing outside a container without mock objects. For example, the HttpServletRequest is pretty easy.

Wiring Up the Controller

Now that we've created our controller, we're going to wire it up using our application context located in the WEB-INF directory of our web application.

This is all you need to do to be able to retrieve shows using your middle tier and allow the view technology of your choice to render an HTML page or perhaps create PDF, Excel, or other content.

The application allows users to reserve seats and purchase tickets. From the screen presenting the show and corresponding performances and availability, the user can select a specific performance, reserve a certain number of seats, and purchase the actual tickets. Before we go on, let's have a more detailed look at what workflow is involved with doing the actual purchase:

In a typical form-editing and -submission process, users are first presented with a form, which they can fill out and submit, after which data binding and validation will be done. If all goes well, the application might, for example, store something in a database after which it tells the user everything went just fine.

The org.springframework.web.servlet.mvc.SimpleFormController does exactly this. It is one of the most useful and often-used controllers Spring provides and can be almost completely configured using Spring's Dependency Injection features.

The process of implementing a simple form controller can be summarized as follows (items between parentheses are not always necessary):

There is, however, a lot more to tell. Before we begin, let's review the properties and some of the call-backs and other customization possibilities involved with the SimpleFormController.

Properties to Configure the Controller With

The SimpleFormController inherits a lot of its functionality from the AbstractFormController and the BaseCommandController. To tweak its behavior, the following properties are at your disposal:

There are several callback methods you can implement to get custom behavior or to extend Spring's default behavior. These include methods called right before and after validation and methods to be implemented when you want to perform custom logic involved with the submitting of a form.

The form workflow is graphically laid out in Figures 12-6 and 12-7. Figure 12-6 explains the workflow involved with requests that need to display a form. 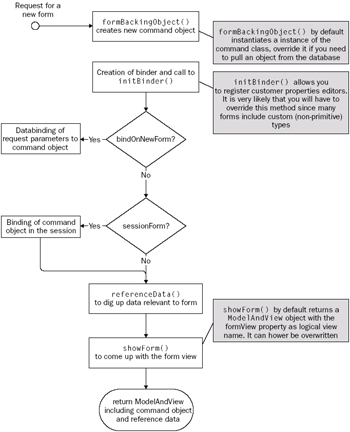 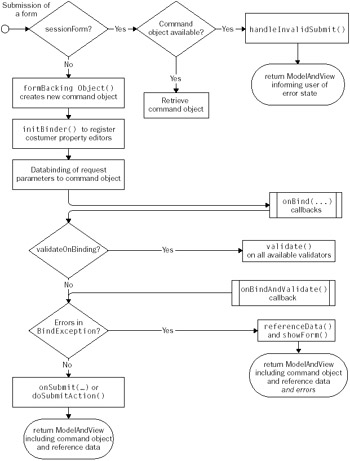 The process of submitting a form (laid out in Figure 12-7) is slightly more complicated. It involves checking for the command object, invocation of the callbacks, validation (if needed), and the actual calling of the submit methods.

As you can see, the binder now knows how to convert shows to String and String back to show — all because we've registered the ShowEditor.

When validation fails, the process is, of course, a bit different because we have to show the form again, including validation errors. The process somewhat resembles the displaying of the form for the first time. As you know, all Spring controllers result in a ModelAndView being created and so do the form controllers. The model a form controller returns consists of three things:

The fact that Spring maintains binding errors separately from the form object means that domain objects can be used for form objects — a contrast with Struts, which requires the use of ActionForm subclasses to hold both form information and any accompanying errors.

When overriding one of the callbacks such as onSubmit(), you have the option to return to the form view (in case of errors during saving or other situations that might require it). You can do so by calling showForm(HttpServletRequest request, BindException errors, String viewName). In its turn this will trigger the reference data method and return the appropriate view. One thing to keep in mind is that the BindException actually wraps the target (or command) object and if you capture the model returned from the showForm() call and go and meddle with the model yourself, you'll run into trouble. Replacing the command object somewhere during the process of submitting the form should be done prior to the onSubmit() callbacks, or by creating a new BindException, wrapping the new target in it, and passing it to the showForm() method.