This section describes some of the more common tasks that you can perform with the Advantage .NET Data Provider. These include connecting to a data dictionary, executing a query, using a parameterized query, retrieving and editing data, and executing a stored procedure.

You connect to a data dictionary or a directory in which free tables are located using an AdsConnection object found in the Advantage.Data.Provider namespace. At a minimum, you must provide the AdsConnection object with sufficient information to locate your data and configure how the data should be accessed. This is done using the ConnectionString property. This property accepts name/value pairs using the parameters listed in Table 15-1. If you use more than one name/value pair, separate them with semicolons.

For any of the optional connection string parameters that you fail to provide, the Advantage .NET Data Provider will automatically employ the default parameters.

Because the AdsConnection object that is used by this project must be used by a number of methods, the AdsConnection variable and several other variables that must be repeatedly referenced are declared private members of the Form class. The following is this declaration:

The data source location of the data dictionary is also declared as a constant member of this class. This constant refers to a share named “share,” on a server named “server,” as shown in the following declaration:

You execute a query that returns a result set using an AdsCommand. There are numerous overloaded methods for doing this. The following code segment demonstrates one of these, where a query string and an open connection are passed as parameters to an AdsDataAdapter’s constructor. Within this constructor, the query string is assigned to an internally created AdsCommand object that is associated with the SelectCommand property of the AdsDataAdapter, which performs the query execution. The Fill method is then invoked on this AdsDataAdapter, which causes the result set to be loaded into a DataTable of a DataSet.

This DataTable is then used to display the resulting data in a DataGrid, as shown in Figure 15-2. The following code demonstrates the execution of a query entered by the user into the TextBox named selectText. This method is associated with the Execute SELECT button (shown in Figure 15-1): 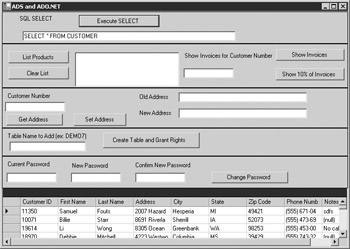 Figure 15-2: The results of a SELECT query displayed in a DataGrid

Before you can execute an AdsCommand that contains a parameterized query, you must bind data to each of its parameters. This is shown in the following method, which is called by the Show Invoices button (shown in Figure 15-1):

As you can see from this code, after verifying that a value has been entered into the customer ID field, the entered data is assigned to the Value property of the AdsParameter. The AdsCommand object that holds the parameter is passed as an argument to an AdsDataAdapter, which then executes the query and assigns the result set to a DataTable. Note that it was not necessary to pass a connection object to the AdsDataAdapter constructor, since the AdsCommand object itself was constructed based on a connection.

This example is actually a classic example of how parameterized queries are used. Specifically, the query text is defined only once, but can be executed repeatedly. And by changing only the value of the parameter, a different result set can be returned upon each execution.

Once you have a reference to a DataColumn, you can execute its ToString method to read its data. This technique is demonstrated in the following method associated with the Get Address button (shown in Figure 15-1):

You can also use a DataColumn to write data back to ADS. This process, however, is somewhat involved.

In ADO.NET, data is always written to the underlying provider using SQL queries. These queries are associated with the DeleteCommand, InsertCommand, and UpdateCommand AdsCommand properties of an AdsDataAdapter. In order for the applicable change to be submitted to ADS, the corresponding property of the AdsDataAdapter must have an AdsCommand object assigned to it. For example, in order to insert a new record into an ADS table, the AdsDataAdapter must have an appropriate INSERT query assigned to the AdsCommand referenced by the InsertCommand property.

The queries associated with the DeleteCommand and UpdateCommand AdsCommands are parameterized, including a WHERE clause that identifies the record that is being deleted or updated, respectively. The values for these parameters are automatically bound by the AdsDataAdapter prior to the execution of the associated query.

If your query returns a static cursor, or if you want to have complete control over the query, you must build the delete, insert, and update Command objects manually. You must then assign these Command objects to the appropriate properties of your AdsDataAdapter before you can call Update.

After making changes to one or more columns of one or more records of a DataTable, you call the Update method of the AdsDataAdapter, passing the corresponding DataSet as an argument. The AdsDataAdapter responds by applying the changes from the DataSet. The following code, associated with the Set Address button (shown in Figure 15-1), demonstrates this operation:

Of course, you can write a SQL UPDATE query and execute it using an AdsCommand to achieve a similar result. While this approach is more efficient at runtime than using a CommandBuilder, since the CommandBuilder will require a number of round trips to the server to collect the metadata that it needs to construct the DELETE, INSERT, and UPDATE commands, each manually created SQL query introduces one more thing about your code that must be maintained—the queries themselves. You can decide yourself which approach is best for your applications.

Invoking a stored procedure that takes one input parameter is demonstrated by the following code associated with the Show 10% of Invoices button (shown in Figure 15-1). The stored procedure referenced in this code is the Delphi AEP created in Chapter 7. If you did not create this AEP, but created one of the other AEPs described in that chapter, substitute the name of the stored procedure object in your data dictionary in the first parameter in the AdsCommand constructor.