You could rely on Disk Druid, as illustrated in Chapter 03 , to configure partitions on your hard disk(s). However, Disk Druid can t split existing partitions like fips can. You don t have access to Disk Druid once Linux installation is complete. And it doesn t have the same degree of control over new partitions as fdisk . Also, while parted is dangerous (changes are immediate), it does resize partitions.

The Linux partition splitter is fips . This tool can only run from the MS-DOS command-line interface. As discussed in Chapter 02 , if you have a Microsoft Windows operating system before XP, you can run it by restarting Microsoft Windows in MS-DOS mode. Otherwise, you need an MS-DOS boot disk, or something like the Microsoft Windows 98 startup disk.

A split partition still needs to be assigned and formatted. You can do this with Disk Druid during Red Hat Linux installation or with fdisk at any time in Linux. If you have more than one hard disk, you ll need to specify the hard disk device. The syntax is:

fdisk -l    Lists the partitions on all hard disks.

fdisk -s /dev/sda1    Returns the size of the first partition on the first SCSI hard drive.

Once at the fdisk prompt, you can run the commands shown in Table A.1.

There s a more flexible but in my opinion dangerous GNU tool known as parted . It works in a similar fashion to fdisk but can do more. The syntax is simple; the following command opens the second IDE hard disk for editing. If you don t specify a hard disk, parted opens the first available hard disk by default.

It is worth restating that this is a dangerous command; once you run some of the options, you may erase all of the data on a partition or an entire hard disk. In addition, while you can format a hard disk partition with parted , you can only format to ext2; parted ext3 formatting is not available as of this writing.

Once at the (parted) prompt, you can run the commands shown in Table A.2.

Three basic commands are available that let you copy the contents of a Red Hat Linux image file onto a floppy disk. Two are usable in Linux; the other is designed for Microsoft operating systems.

Creating a Boot Disk in a Microsoft OS

The rawrite command copies the contents of an image file, such as boot.img , to a floppy disk. The standard approach is to go into MS-DOS mode and run the rawrite command. Assuming rawrite is on the dosutils subdirectory of your D: drive, you re prompted with the following commands:

Alternatively, on the first Red Hat Linux installation CD, there is a \dosutils\rawritewin\ rawwritewin.exe command that provides a GUI for the same purpose. It opens the RawWrite window shown in Figure A.1. 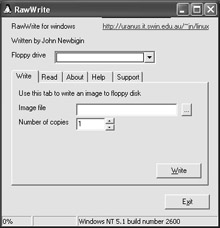 Figure A.1: RawWrite for Windows

In Linux, it s common to use the dd command to convert an image file like boot.img to a floppy disk. For example, the following command copies the files from boot.img to the first floppy drive device on your system:

However, Linux understands the format of an image file. So you can just read it directly to the floppy drive device with a command like the following:

Setting Up a Network Server

Setting Up a Kickstart Installation

The details of setting up a Kickstart installation are covered in Chapter 05 . To summarize, there s already a Kickstart file available; the settings that correspond to how you installed Red Hat Linux are stored in the /root directory in anaconda-ks.cfg . You can modify this file to meet your needs on another computer; remember to activate the partition commands, which are commented out by default.

The easiest way to set up a Kickstart installation is to copy the desired file as ks.cfg on a boot floppy. At the Red Hat Linux installation prompt, enter this command: