The default print server for Red Hat Linux is CUPS. Since CUPS took over as the default for the first time on Red Hat Linux 9, I assume that many of you still prefer to use the Line Print Daemon (LPD). While LPD has served Linux well, it does not have the capabilities of CUPS with respect to print groups or classes. CUPS allows you to work with IPP, which is the evolving standard for print servers on most operating systems.

The LPD system includes only one RPM package, LPRng-* . If you want to use LPD, install this package. The key LPD configuration file is /etc/printcap , which is part of the basic setup-* RPM package. You can edit this directly or use the redhat-config-printer utility. Once you ve configured a printer, you can maintain that printer directly from the command-line interface with commands such as lpr , lpq , lpc , and lprm .

Setting LPD as the Default

The cupsd daemon is active by default in Red Hat Linux 9. If you prefer LPD, you ll need to deactivate cupsd and activate lpd with the service cups stop and service lpd start commands. Next, deactivate the cups-lpd daemon with the chkconfig cups-lpd off command. Then, switch the print service with the redhat-switch-printer utility.

If you want to make the change permanent, make sure that Linux is set to start lpd at the desired runlevels by using the chkconfig command. See Chapter 13 for more information on chkconfig . 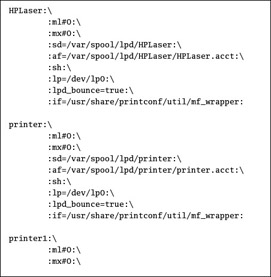 Red Hat actually includes two configuration files for LPD printers: /etc/printcap and /etc/ printcap.local . If you use redhat-config-printers , the results are written directly to (and overwrites anything in) /etc/printcap .

If you also want to configure printers by directly editing a configuration file, you should type the needed commands into /etc/printcap.local . The contents of this file are included in /etc/printcap when you restart the lpd daemon.

There are a number of programming codes in a typical /etc/printcap file. Some of them are shown in Table 25.13.

In other words, there are three command lines in Figure 25.18 ; the backslash is used to continue a command from one line to another. For example, the following commands are read as if they were on the same line:

There are two other major LPD configuration files. The default versions of these files are good for most purposes. In most cases, you can change what you need in /etc/printcap or in the application that you re using. Since these files are rarely edited, we ll just mention their purpose. The /etc/lpd .conf file notes the default settings for printers. The /etc/lpd.perms file sets permissions for the LPD spooler.

When you have Linux read the contents of a file with the cat command, the shell sends the result to standard output, which normally means that you see the result on your screen. In contrast, when you use lpr , the shell sends the result to a spool file on the local computer, then on to a print server computer, and finally to the printer. The lpr command is effectively a client. When it produces a spool file, the result is processed by the lpd server on a local or remote network.

Therefore, when you run a command such as lpr file , the shell sends the result to the default printer as configured in /etc/printcap . Alternatively, you can send the print job to a different printer.

For example, if colorprinter is configured in /etc/printcap , the following command sends the job to that printer:

Other variations on the lpr command are shown in Table 25.14.

The lpq command gives you the current print queue. There are three basic options, as shown in Table 25.15. This command also includes a list of job numbers , which you might need for the lprm command.

If a print job isn t already in your printer s memory, the lprm command can delete print jobs currently in your queue. With lprm , you can remove a print job in one of three ways: by print job number, by user, or by printer. Table 25.16 shows examples of this command.

The lpc command allows you to control a number of characteristics of each printer. As shown in Table 25.17, this command lets you check printer status, kill active print jobs, or even redirect jobs to a different printer.

Lotus Notes Developers Toolbox: Tips for Rapid and Successful Deployment
Practical Intrusion Analysis: Prevention and Detection for the Twenty-First Century: Prevention and Detection for the Twenty-First Century
An Introduction to Design Patterns in C++ with Qt 4
Persuasive Technology: Using Computers to Change What We Think and Do (Interactive Technologies)
Sap Bw: a Step By Step Guide for Bw 2.0
Visual Studio Tools for Office(c) Using C# with Excel, Word, Outlook, and InfoPath
flylib.com © 2008-2017.
If you may any questions please contact us: flylib@qtcs.net
Privacy policy
This website uses cookies. Click here to find out more.
Accept cookies