DHCP servers can simplify and centralize network administration if you're administering more than a few computers on a network. They are especially convenient for networks with a significant number of mobile users. The BOOTP protocol is essentially just a way to access a DHCP server on a remote network.

As of this writing, Red Hat does not include any GUI tool to configure a DHCP server. You'll have to do your work in this section from the command line interface.

While DHCP knowledge is not explicitly listed in the current Red Hat Exam Prep guide, it is a part of the associated curriculum. Based on their outlines, the RHCT course, RH133, examines the configuration of a DHCP client. The RHCE course, RH300, addresses DHCP servers. It is important for any network administrator to know DHCP. However, it's not in the Red Hat Exam Prep guide; you'll have to make your own decision about whether to learn how to create a DHCP server for your RHCE exam.

As with most network services, DHCP has a client and a server. These are based on the dhcp and dhclient RPM packages. The dhclient RPM package should be installed by default; if you're using a service such as NetworkManager, you'll also need the dhcdbd package. If you're working with IPv6, you'll need the dhcpv6_ client. On the server side, the dhcp RPM package is installed by default with the Network Server package group.

A DHCP server sends messages to multiple computers on a LAN. This is also known as a multicast. It should be enabled by default. You can confirm this with the ifconfig command. The output should resemble Figure 13-4, which includes a MULTICAST setting for the active network card. 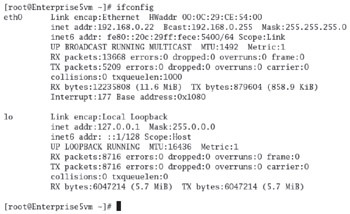 If you don't see MULTICAST associated with your network card, someone has compiled this feature out of your kernel. For more information on the kernel management process, see Chapter 8.

Now configure the DHCP server daemon, dhcpd, by creating or editing the /etc/dhcpd.conf configuration file. Normally, this file allows the DHCP server to assign IP addresses randomly from a specific range. But the default version of this file is blank. You can start with the dhcpd.conf.sample file in the /usr/share/doc/dhcp-versionnum directory. The lines that start with a hash mark (#) are comments in the file. Let's analyze this sample file in detail:

You can also assign a specific IP address to a computer based on a client's Ethernet address. Just add an entry similar to the following to /etc/dhcpd.conf:

This specifies what the DHCP server does when a network card with a hardware address of 08:00:12:23:4d:3f tries to connect via Ethernet. In this case, the IP address 192.168.0.201 is assigned to a client named mommabears.

Naturally, you'll want to modify this file accordingly for your particular network. For example, if you've configured computers on the example.org network described earlier in this book, you'll want to substitute example.org and the associated IP addresses in your /etc/dhcpd.conf file. I've done this for my network in Figure 13-5. 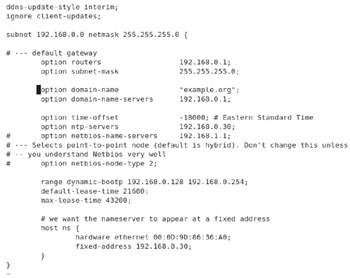 DHCP can be customized for individual computers. You can set up static IP addresses for servers. Once you're ready, start the dhcpd service with the following command:

By default, this starts a DHCP server, which listens for requests on the eth0 network card. Alternatively, to have a DHCP server listen on the eth1 network interface, run the following command:

If these commands don't get a response, you probably haven't created a /etc/dhcpd .conf configuration file.

You can watch the DHCP server in action. Stop the DHCP server with the service dhcpd stop command. You can then restart it in the foreground with standard error descriptors with the following command:

Start another Linux/Unix client. Make it look for another DHCP lease with the dhclient -r and dhclient commands, and then watch the console of the server. You'll see a number of DHCP communication messages on the server that illustrates the process of leasing an IP address to a client.

Once you've configured your DHCP server to your satisfaction, remember to activate it at the appropriate runlevels with a command such as:

In order for the DHCP server to work correctly with picky DHCP clients such as Microsoft Windows 9x, the server needs to send data to the broadcast address: 255.255.255.255. Unfortunately, Linux insists on changing 255.255.255.255 into the local subnet broadcast address. The mixed message results in a DHCP protocol violation, and while Linux DHCP clients don't notice the problem, Microsoft DHCP clients do. Normally, such clients can't see DHCPOFFER messages and therefore don't know when to take an IP address offered from the DHCP server. If you're configuring a DHCP server for a network with Microsoft Windows computers, run the following command,

where eth0 is the name of the NIC that connects the server to the network.

You can set up DHCP as a client using the dhclient command, or you can use the Red Hat Network Configuration tool (which you can also start with the System | Administration | Network command). Alternatively, configuring a DHCP client at the command line is not difficult (and is faster on the Red Hat exams). Make sure that the /etc/sysconfig/network configuration file includes the following line:

If you don't want the DHCP server to assign a DNS server in the client's /etc/ resolv.conf, add the following directive:

The next time you reboot, your network configuration should look for DHCP address information automatically from the DHCP server for your network.

Alternatively, you can use the Network Configuration tool from a GUI to configure DHCP. You can also start it from a GUI terminal console with the system-config-network command. When the tool opens, select your network card and click Edit. You should see a window similar to what is shown in Figure 13-6. 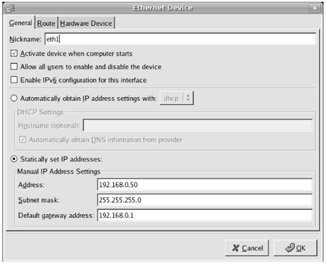 If the DHCP client configuration instructions in this chapter are not working, there may be a problem with the way the network is set up on your Linux computer. For example,