Red Hat Enterprise Linux installs the Secure Shell (SSH) packages by default, using the openssh-server, openssh-clients, openssh-askpass, and openssh RPMs. The Secure Shell and Secure Copy programs, ssh and scp, are replacements for the rsh, telnet, and rcp programs. They encrypt communication between different computers. The secure daemon, sshd, listens for all inbound traffic on TCP port 22. The SSH configuration files are located in the /etc/ssh directory.

Your private key (essentially a file with your special number) must be secure. When you enable an application, it can attach the key to your messages. Anything you send-say, from your e-mail account-can then be digitally signed and encrypted. The public key is added to the end as part of your signature. Only the recipient will be able to decrypt the message.

Your public key value is just that, publicly available. A central authority such as VeriSign, GlobalSign, or Thawte provides public access to public keys they have created. If they generate a private key for you, they'll keep a secure copy on their system. You can just attach your public key to the e-mail, or the end users can publicly retrieve it from the Web site associated with the central authority.

The example shown in Figure 13-1 lists the directories and files associated with SSH usage as well as a public key that has been added to your "keyring." 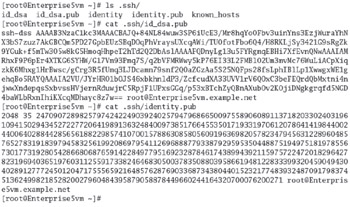 This key is like a password used to encrypt your data. Imagine trying to remember the 1024-bit number expressed in hexadecimal value as shown here.

That is why the applications save this value for you, on a "public keyring." You can add as many public keys from other users, sites, and services as you wish.

Your private key is similar, but you must keep it private, or this whole system fails. Keeping it private means no one should have access to your PC. If your PC is public, secure your system with a passphrase (password), as shown in Figure 13-2, to use this key. Don't forget the passphrase, or you'll have to remove and reinstall the Secure Shell. 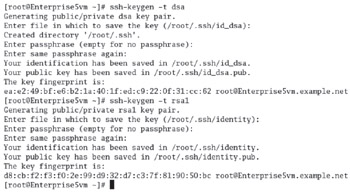 How to Generate Your Keys

There are a few SSH-oriented utilities you need to know about:

All you need to do is transfer the public key, with the .pub extension, to an authorized user. It's important to add a passphrase to protect that digital signature. In the worst case, a cracker could use the passphrase to steal your identity.

While encryption keys are important, remember that the Red Hat exams require that you configure services for basic operation. So if you're not already familiar with SSH, stay focused on getting it working, as described in the rest of this section.

The Internet is a public network. If you're connected to the Internet, anyone in the world could conceivably access your computer through this public network. All that is needed is Internet access from an anonymous location. In other words, a skilled cracker may be able to capture your passwords from a computer in a public library.

Unix and the network that became the Internet started in an educational setting, where there is a premium on the free exchange of information. While the resulting openness of the Internet is good, it can present security challenges. The original Unix tools developed for networks were not designed with security in mind.

These tools include telnet, ftp, and the "r" (remote) commands (rlogin, rcp, rsh). These utilities pass all information, including login names and passwords, across the network in clear text format. Anyone with a simple protocol analyzer such as Ethereal can find your password in this way. The Wireshark (successor to Ethereal) output shown in Figure 13-3 highlights one of the letters in a Telnet password on my private LAN (it's an e). The other Telnet packets contain the other letters and/or numbers of the password. 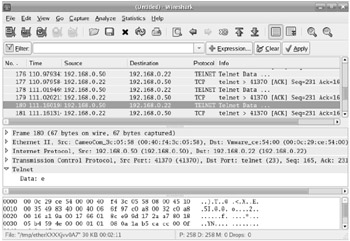 Figure 13-3: It's easy to decipher a clear text password.

The Secure Shell utilities were an answer to this problem, using high encryption standards. The Secure Shell tools replaced their insecure brethren and provided full encryption of all data between the hosts that is very hard to break, even by the brute force method.

You don't have to do much to configure an SSH server for basic operation. Install the packages described earlier, activate the service, make sure it's active the next time you reboot your system, and open the appropriate port in any firewalls that you've configured. Then all you need to add is host- or user-based security for the service.

The SSH server configuration file is /etc/ssh/sshd_config. The first directive (Protocol 2) configures SSH version 2, which is more secure. By default, it also includes the following directives.

The first directive sends all logging attempts, successful and otherwise, to the appropriate log file; in this case, /var/log/secure.

The next directive authorizes password authentication, based on local user passwords:

The next directive disables PAM authentication, despite the UsePAM=yes later in this file.

This is followed by a directive that supports authentication using the Generic Security Services Application Programming Interface for client-server authentication:

The next directives allow the client to set several environmental variables. The details are normally trivial between two Red Hat Enterprise Linux systems:

The following directive is important for anyone who needs remote access to a GUI tool:

For example, when I'm working from my patio, I can connect to and open GUI tools from Red Hat systems in my office when I use SSH to connect with the following command:

The final directive supports the use of SSH encryption for secure FTP file transfers:

I like to add two directives that promote security by user and host. For example, logins by the root user are allowed. By adding the following directive,

I also like to limit the users allowed to access a system via SSH. The key is the AllowUsers directive. You can limit by user with a directive such as:

Alternatively, you can limit access by each user to certain hosts with a directive such as:

Configuring an SSH client is a simpler process. The standard configuration file for a client system is /etc/ssh/ssh_config. Individual users can have custom SSH client configurations in their ~/.ssh/config files. There are four directives included by default: