You can add an XMLConnector to your Flash movie by dragging it from the Components panel. I normally place these components off the Stage as they have no visual appearance in compiled Flash movies. Once youve added the component, youll see the icon shown in Figure 8-3.

You can configure the settings for the XMLConnector in the Component Inspector. This panel allows you to specify the external XML document and configure other settings, such as white space. Dont forget that youll also need to give the XMLConnector component an instance name . I usually use the suffix _xc to indicate that the component is an XMLConnector, for example, instanceName_xc . 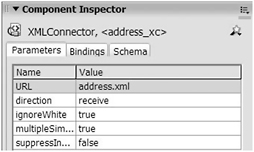 The Component Inspector has three tabs that youll use to work with the XMLConnector. To start with, youll need to configure the Parameters panel so that you can set the connection properties. Table 8-2 shows a summary of the parameters in this panel and their purpose.

Most of the time, youll only need to configure the first two settings: URL and direction .

After youve configured the parameters for the XMLConnector, you can import a sample XML document into Flash so you can see the XML element and attribute structures. This gives you a visual representation of the XML document structure and lists the names and datatypes of attributes and elements. Flash refers to this representation as a schema. Bear in mind that this is not the same as an XML schema. The next section covers the process of importing an XML structure into Flash.

Creating a schema from an XML document

The Schema tab in the Component Inspector allows you to generate a schema from an existing XML document. You choose a document with an .xml extension and Flash will find the names and datatypes of each element and attribute.

Flash allows you to generate two different types of schemas from external XML documents: one called params:XML and the other results:XML . The params type represents the structure of data being sent out of Flash while you use results for the structure of incoming XML data. Figure 8-5 shows both options. You can see their direction by looking at the arrows. The right arrow to the left of params indicates that XML data is outgoing while the left arrow indicates incoming data for results .

Figure 8-5: The Schema tab in the Component Inspector panel

To create a schema, select either params or results and click the Import a schema button at the right side of the Schema tab. Figure 8-6 shows the button.

Figure 8-6: Importing a schema from a sample XML document

Click the button and navigate to the XML document. You must use a physical XML document rather than a server-side file that generates an XML document. Once youve imported the document, Flash will display the structure within the Schema tab.

Ive used the resource file address.xml to generate the structure shown in Figure 8-7. The following listing shows the contents of the XML document:

The address.xml document generates the Flash schema shown in Figure 8-7. 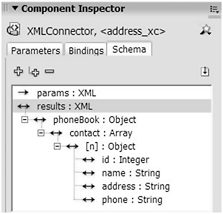 Flash lists the name and datatype of each element in the Schema tab. In Figure 8-7, the root element is called phoneBook . It has an Object datatype. It contains an array of contact elements, equivalent to the childNodes collection in the XML class. The contact element contains id , name , address , and phone content.

Youll notice that the XML document shown in the previous listing is slightly different from the one we used in earlier chaptersit doesnt use attributes. In this version of the XML document, Ive modified the id attribute and made it a child element of <contact> . The revised structure will make things easier as we bind data to UI components. Figure 8-8 shows a schema that contains attributes. They are prefaced by an @ sign. 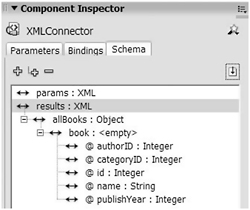 The schema shown in Flash is a representation of the bindable data structures within an XML document at the time of import. In other words, it shows what data you can bind to your other data components.

If you dont have a sample XML document, you can create a schema in Flash manually.

Creating a schema by adding fields

While the usual method is to generate a schema by importing an existing XML document, it is possible for you to create the schema yourself. Select the parent element for your schema field and click the Add a field button, as shown in Figure 8-9. If youre adding the root element, youll need to select either params or results first. For each subsequent element, youll need to click the parent and add another field.

Flash will add a new field underneath the selected element. You can configure the field using the settings at the bottom of the Schema tab. Figure 8-10 shows the properties that you can configure. 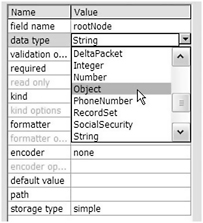 In Figure 8-10, Ive entered the name rootNode for the new field and Im selecting the Object datatype.

Once youve created a schema for your XML document, you can configure the settings in the panel at the bottom of the Schema tab. The panel will display the settings for the currently selected schema item. Figure 8-11 shows the settings for an Array item called contact . 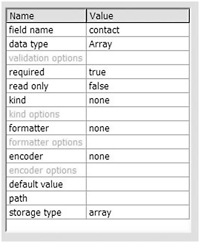 Figure 8-11: The settings for an Array field

You dont often need to change the field properties within the Schema tab. Table 8-3 summarizes each setting and its purpose.

Once youve configured the parameters and added a schema, you can trigger the XMLConnector component and test that its working correctly. Triggering forces the XMLConnector to load data. After youve done that, you can bind the XML data to other components.

Triggering requires a single line of ActionScript that you can either write yourself or generate by adding a Behavior. Whichever method you choose, its important to check that youve given the XMLConnector an instance name first. Ill start by showing you how you can trigger the component with a Behavior.

First, youll need to show the Behaviors panel by using the SHIFT-F3 shortcut key. Select frame 1 of the layer for the ActionScript. You can also select a button instance. Click the plus sign in the Behaviors panel, choose the Data category, and select Trigger Data Source . Figure 8-12 shows the selected option.

Figure 8-12: Adding a Behavior to trigger the XMLConnector

Flash will prompt you to select the component instance to trigger, as shown in Figure 8-13. 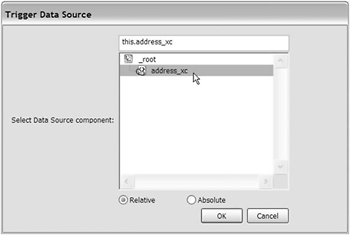 Choose the instance and select whether you want a Relative or Absolute path. I normally leave the default Relative option selected. Click OK , and Flash will create a new Behavior to trigger the XMLConnector. Figure 8-14 shows the new Behavior in the Behaviors panel.

Flash adds the ActionScript that triggers the XMLConnector to your selected location. You can view the Actions panel to see the code that Flash generates. Figure 8-15 shows a frame action in the Actions panel after adding the Behavior. We used a Relative setting in the Trigger Data Source dialog box.

Figure 8-15: The ActionScript generated by Flash

The code to trigger a component is very simple. It consists of the instance name of the XMLConnector and the trigger method. In Figure 8-15, it also includes the word this . If youre working on the main timeline, you can remove this without affecting the trigger method.

Testing for a loaded XML document

To test whether an XML document has loaded, youll have to write ActionScript that accesses the results from the XMLConnector. Youll use an event listener to listen for the result event. The results property of the XMLConnector contains the XML document, and you can trace this to see the contents. Be careful not to mix up the result and results keywordsthey mean very different things. This code snippet shows an example:

If you tested this code, youd see the XML document displayed in an Output window. The listener passes the evtObj object to the event handler function, and you can use evtObj.target.results to display the complete XML document.

While you dont need to use a schema when you load an external XML document, its a good idea. It makes binding much easier if you can see a visual representation of your element and attribute structure.

In this example, well load the file address.xml into Flash using the XMLConnector component. Well add some ActionScript to display the XML content within an Output window.

In exercise 1, we used the XMLConnector component to load XML content from the external file address.xml . We also added ActionScript so that we could display the XML tree and test that the XML document was successfully loaded.