Every operating system provides at least one interface whereby humans may communicate with it. The i5/OS provides two interfaces. The original interface is text-based, consisting of a set of commands and menus that categorize those commands. The newer interface, iSeries Navigator, is a graphical system that runs on attached personal computers. This chapter deals with the command interface. iSeries Navigator is discussed in Chapter 10.

Many computers have operating systems with control commands that make little sense. You might guess that the cp command copies files on a UNIX system, but would you know that the command to rename a file is mv, or that the cat command can display the contents of a file on a dumb terminal? The i5/OS, on the other hand, uses a standard set of abbreviations that are always followed. The vast majority of commands adhere to the following naming scheme:

Commands are not case-sensitive, except for quoted parameter values. The following are all acceptable versions of the Display User Profile command: 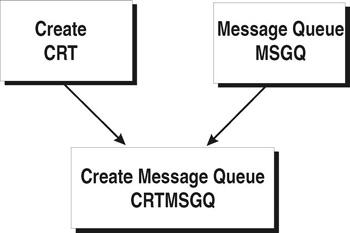 Now, suppose you want to display a data area. Display is DSP and data area is DTAARA. The command, then, is DSPDTAARA. Correct again.

Finally, suppose you want to create an RPG program and then you want to delete a CL program. Create is CRT and RPG program is RPGPGM, so the command should be CRTRPGPGM, which is correct. To delete a CL program, however, you do not run the DLTCLPGM. That command does not exist. You run the DLTPGM command. The system doesn't care what language you used to create the program when you are going to delete it. Although you use CRTPF to create a physical file, you use DLTF (delete file) to delete it. It makes no difference to the system what kind of file it is.