Thomas Sterling and Don Becker created a 16-node cluster in 1994. They named the cluster "Beowulf" after the earliest surviving epic poem written in English. The development effort of the Beowulf cluster quickly turned into what is now known as the Beowulf project.

Beowulf is more an approach to building supercomputers than a specific type of cluster. It is a multi-computer architecture that can be used for parallel computations. Beowulf is a system that usually consists of one server node (we call it the head node) and one or more client nodes (the compute nodes) connected together via Ethernet or some other network. It is a system built using commodity hardware components, like any PC capable of running Linux, standard Ethernet adapters, and switches.

There is no specific software package called "Beowulf." Instead, there are several pieces of software that many people have found useful for building Beowulfs. Beowulf uses commodity software like the Linux operating system, Parallel Virtual Machine (PVM), Message Passing Interface (MPI), and standards.

The server node controls the whole cluster and serves files to the client nodes. It is also the cluster's console and gateway to the outside world.

A logical view of Beowulf architecture is illustrated in Figure 1-1 on page 7. 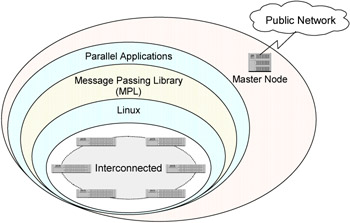