Reorganizing a database, irrespective of whether it is a data warehouse or a database used for transaction processing-style systems, is not a task to be undertaken lightly. -Unfortunately, in a data warehouse, the time required to reorganize can become a serious issue due to the high data volumes involved. Therefore, it shouldn't be necessary to reorganize the database entirely, but minor changes may be necessary.

Reorganizations can occur for a variety of reasons, such as:

A change in the business requirements from the system is almost impossible to predict, and one solution to the problem may be to create a data mart rather than restructure the entire data warehouse.

A fundamental flaw in the database design can be overcome by carefully reviewing the database design and, if necessary, asking for an external review by an experienced data warehouse designer. One of the problems with data warehouses is that what may seem a good design at the outset may prove unsuitable in the long term due to the large volumes of data involved. Therefore, try to minimize the likelihood of this occurring by using techniques such as partitioning.

Some reorganization may be planned. If you want to keep your data warehouse somewhat constant in size and not let it grow indefinitely, you may decide to keep only a few years of data. When new data is added, old data is archived and removed. This is called a rolling window operation and is discussed later in this section.

Some of the structural changes required by the data warehouse can be achieved using partition operations. In this section, we will look at some of the most common partition maintenance operations, including the following:

When you first create the warehouse, you may have little or no historic data to populate it. Therefore, for the first 18 to 24 months, you happily add new data every month until the required system limits are met. Then, when the data warehouse is full, every month you back up the old data and drop it to make room for new data. Without partitions you would have to scan the data and manually delete it, which is very time consuming. The faster alternative to this problem is to drop the partition containing the old data and create a new partition for the new data, as shown in Figure 7.42.

This technique is applicable only if the data is partitioned on a date. Therefore, if you decide upon another partitioning scheme, such as a code, then this type of maintenance operation would not be possible.

The SQL commands to perform the tasks in Figure 7.42 are shown below. First, the old partition containing the data for sales for the month of May 1997 is dropped.

Next, the new partition for the data for sales for the month of April 2002 is created. The first step is to create the tablespace where the data will reside.

The next step is to alter the table definition to reference the new tablespace that was just created. The PURCHASES_APR2002 partition is added to the table.

You can merge two partitions into one or split a partition if a partition becomes too large. Data can either be merged into a new partition or into an existing partition.

One technique often used by designers is to keep the first six months' data in monthly partitions, and then after that, store the data in quarterly partitions. Using the MERGE PARTITION option the data can be easily moved to the new partition, as illustrated in the following code segment.

If we wanted to combine the data for January through March 2002 into a partition for the quarter, we could merge the partitions. First, a new tablespace is created to store the Q1 purchases.

Next, the partition with the lowest range, PURCHASES_JAN2002, is merged into the PURCHASES_Q12002 partition. This statement shows merging data into an existing partition.

After this operation, the purchases table contains one partition, as shown in Figure 7.43. The high value for the purchases_q12002 table is March 31, 2002. 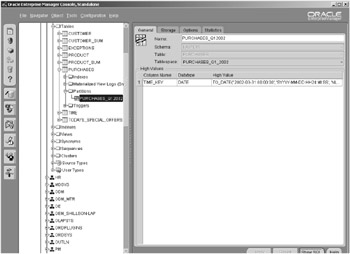 The new index partitions are unusable and must be rebuilt, as shown in the following example.

If a partition becomes too big, it may need to be split to help maintenance operations complete in a shorter period of time or to spread the I/O across more devices. A partition can be split into two new partitions. If the PURCHASES table was originally partitioned by quarter, and sales significantly exceeded expectations, resulting in a very large partition, the partition could be split up into three monthly partitions. Tablespaces are first created for PURCHASES_JAN2002, PURCHASES_FEB2002, and PURCHASES_MAR2002.

After the split operation, there are two partitions. Next, the remaining rows in the partition, PURCHASE_Q12002 are split into the February and March partitions.

The data has been repartitioned, and the PURCHASES_Q12002 partition automatically dropped, as can be seen in Figure 7.44. 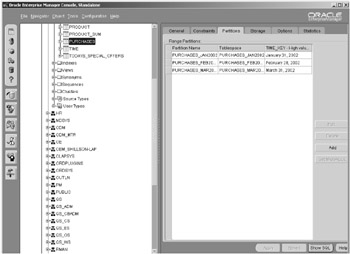 Any partitions of the local indexes corresponding to the PURCHASES_Q12002 partition have been dropped. In their place are new local index partitions for the new table partitions.

Any unusable indexes must be rebuilt.

The following example shows the creation of a hash-partitioned table with ten partitions.

To reduce the number of partitions by one, issue the following command.

This, in effect, drops a partition.

Sometimes we need to remove all the rows in a partition. For example, we may only keep 18 months' worth of data, and, once a month, we need to remove that old data. Rather than delete each row individually, we can use the TRUNCATE PARTITION option, which rapidly removes the data.

After truncating the partition, all rows have been deleted.

A partition can be moved from one tablespace to another. If the January purchases partition had been created in EASYDW_DEFAULT or some other tablespace, and had to be moved to the PURCHASES_JAN2002 tablespace, the following command could be used. By specifying NOLOGGING, the operation will not be logged, resulting in better performance. After performing NOLOGGING operations, don't forget to take a backup, since you will not be able to recover in the event of a media failure.

Probably one of the aspects of the design that will be changed is the indexes. New ones will be created, and existing ones will be modified. In a data warehouse, there is a temptation to create more indexes, because of the lack of updates to the system. However, you should consider the impact all of these indexes will have on the data load time.

If you need to rebuild an index for any reason, then it is suggested that you use the ALTER INDEX REBUILD statement, which should offer better performance than dropping and recreating the index.