As illustrated in Figure 4.4 on page 39, the interface between the WBEM server and its providers is implemented as a Provider Protocol Adaptor. In the early days of WBEM/CIM these adaptors were not seen as plug-in components and the interface at this point was defined by the particular WBEM server implementation. This led to fragmentation as WBEM servers implemented in Java could not interface with providers written in C++ and vice versa. This was particularly a problem with very small devices where it was necessary to write providers in C, memory being inadequate for either C++ or Java.

Gradually a specification, the Native Provider Interface (NPI), emerged to address the issue of interfacing with providers written in C, particularly from Java WBEM servers.

NPI is currently being superseded by the Common Manageability Programming Interface (CMPI). The CMPI specification can be found at http://www.wbemsource.org .

Both the openPegasus and OpenWBEM servers currently provide C++ interfaces which are different from the CMPI and each other; but both also now have CMPI adapters.

The WBEM server/provider interface works generically on the principle, illustrated in Figure 11.1, of a client/server relationship, with the WBEM server being the client (sic) requesting services of the provider, acting as the server. 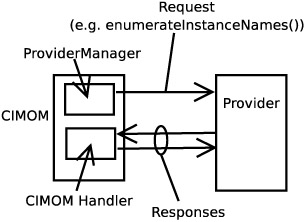