To learn about the basics of the C++ language, you should first create a C++Builder console application project. To do so, select File ® New ® Other to display the New Items dialog box, select the C++Builder Projects node in the Item Categories tree, and double-click the Console Application item on the right (see Figure 2-9). C++Builder projects, like all other projects, can also be created by double-clicking the appropriate item on the Tool Palette. 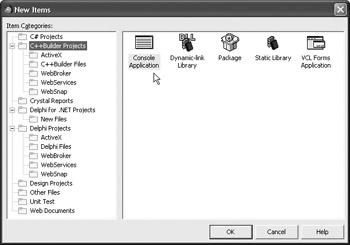 After you click OK on the New Items dialog box or double-click the Console Application item in the C++Builder Projects category on the Tool Palette, the IDE displays the New Console Application wizard, which allows you to choose between a C and a C++ console application project (see Figure 2-10). 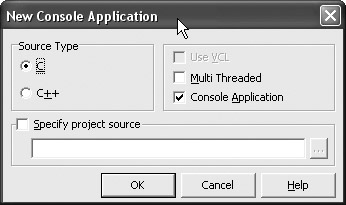 The .bdsproj file in a C/C++ project is the same as in a Delphi project. It's an XML file that contains project configuration settings. The .res file is a resource file that contains the main icon for the application (see Figure 2-12). The .c file is the main source code file.

If you compile the application now, the IDE will create three more files: an .obj, a .tds, and finally the .exe file. The .obj file is the compiled version of the .c or .cpp source file, the .tds file contains debugger symbol information used for debugging, and the .exe file is of course the final executable.

The Structure of a C/C++ Console Application

Unit1.c file. You can see this code in Listing 2-18. When you start typing this example (and others), remember that both C and C++ are case sensitive and that most of the identifiers you'll encounter in these languages are lowercase.

Listing 2-18: The source code of a C console application

Like Delphi, C++ supports both single-line and block comments. As you can see below, a single-line comment is written exactly the same in Delphi and C++, using two adjacent slashes:

The #pragma hdrstop directive terminates the list of header files that should be precompiled. All header files above the #pragma directive are compiled once and then stored to disk. These precompiled headers drastically increase the speed of compilation because the compiler no longer has to parse the headers but simply loads the already parsed headers from disk. For best compiler performance, you should place common header files before the #pragma hdrstop directive and project-specific source code files (the ones you're working on) after it. 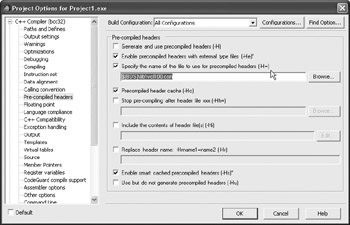 The #pragma argsused directive is automatically generated by the IDE to remove the warning message that tells us that we're not using the argc or argv parameters in the main function (see Figure 2-14). The directive is placed immediately above the main function because it only affects a single function, the one that follows in the source code. You can read more about functions and parameters in Chapter 5. 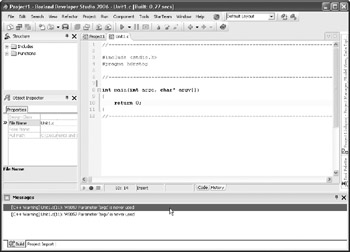 Figure 2-14: A console application compiled without the #pragma argsused directive 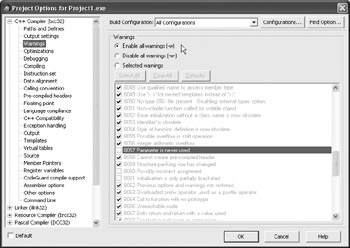 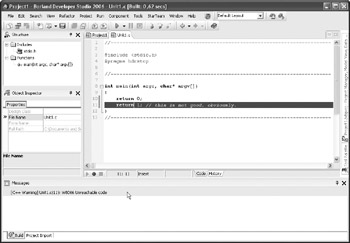 Figure 2-16: Error message when placing statements after the return statement

The value 0 that follows the reserved word return is the return value of the function. The main function returns 0 to indicate that it executed successfully. To notify the system that an error occurred during execution, you can return a non-zero value.

To output a piece of data to the console window in a C console application, you can use the printf statement, which is declared in the stdio.h header file. Note that strings in C and C++ are surrounded by double quotes, not by single quotes as in Delphi.

The following listing shows how to output a simple text message using the printf statement. (Note that redundant comments have been removed from the listing to save space.)

To pause the execution of a C/C++ console application until the user presses a key, we can use the getch() function, which reads a character from the keyboard but doesn't display it on screen. To use the getch() function in your application, you have to include the conio.h header file using the #include directive. Don't forget to include it before the #pragma hdrstop directive.

The following listing shows a very simple C++ console application that uses the cout object to output the string "Hello from C++Builder!" to the screen.

Although the way text is displayed with the cout object is a bit awkward at first, there's not much to it. To display text or other data using the cout object, you have to remember only two things:

The cout object normally works like the Write statement in Delphi — it displays text in the same line. To move the cursor to a new line, like Delphi's WriteLn statement does, you need to assign the endl (end line) manipulator to the cout object (this is much easier than it sounds).

The following code shows how to output text using the cout object and how to use the endl manipulator to move the cursor to a new line. Figure 2-17 shows the result of the code.

Variable declaration in C++ is somewhat different from that in Delphi. There are five basic differences:

The following example shows how to declare two variables for use in the main function.

If you run this application, you'll learn an important thing about Delphi and C++ variables: When a variable is declared, it is assigned a random value from memory (see Figure 2-18). So, before using a variable in either language, you should initialize the variable to a valid value.

The previous example shows how to declare variables the semi-Delphi way — at the beginning of a block — before all other statements. The following example, however, shows that it's valid to declare a variable anywhere in a block, as long as you don't try to use the variable before it's declared.

There are two ways a variable can be initialized in C++ (the first way is used most often):

The example in Listing 2-25 illustrates both ways of variable initialization.

Another notable difference between Delphi and C++ is that the assignment operator can be used to assign a common value to multiple variables at once. Here's how you can assign the number 5 to four different variables (and how to declare several variables of the same type in the same source code line):

The example in Listing 2-26 fully illustrates how to use compound assignment operators.

Table 2-7 shows both C++ and Delphi arithmetic operators and two minor differences between arithmetic operators in these two languages: C++ has only one division operator for integer and floating-point numbers and it has two operators not available in Delphi. Actually, the increment and decrement operators exist in Delphi, but as the Inc and Dec procedures (more on these procedures in Chapter 5).

Here's an example that shows the result of using the postincrement operator in an expression:

Believe it or not, the space in the above substatement is extremely important. If you remove the space from the statement, you'll get an incorrect result and a bug in your code. Here's the statement without a space:

If you don't want to worry about the space in this statement, enclose the preincrement operator and the variable in parentheses:

There are two ways to define a constant in C++: with the #define preprocessor directive and with the reserved word const. Although both ways are valid, you're better off using the const reserved word since type-checking can be performed on such constants.

The syntax of the #define directive is:

The syntax of the const reserved word is:

Here's a simple example that shows how constants are declared using both the #define preprocessor directive and the reserved word const:

Constants declared using the #define preprocessor directive aren't real constants because the C++ preprocessor replaces the defined identifier with the defined value (for instance, the MAGIC_NUMBER with 20) in the source code and then provides the C++ compiler with the modified source file. The object file generated by the C++ compiler actually doesn't contain a single reference to the MAGIC_NUMBER identifier or any other defined identifier.

The cin object, declared in the iostream.h header file just like the cout object, makes basic input in C++ as simple as it is in Delphi. To get input from the user using the cin object, you need to use the extraction operator (>>, two greater-than characters). Here's how you use the cin object to store user input to a variable:

Finally, here's the C++ version of the application that calculates the total cost of a product (the Delphi version of this example is displayed in Listing 2-16).