Other applications might have the ability to control the amount of memory, or, say, processor that your SQL Server instance can utilize. Is this recommended? In most cases, the answer is no. SQL Server does a good job of managing its own resources, and in some cases it has to. However, in Windows Server 2003, you can use a new feature called Windows System Resource Manager (WSRM). WSRM is supported in both stand-alone and clustered environments, although in a clustered environment, you will need to create or export the settings on one node and apply them to others. WSRM is a nonintrusive tool. You should use SQL Server s interfaces to manage processor affinity and memory, but using WSRM, you can allocate processor percentage for systems with multiple applications (such as a machine with SQL Server, Internet Information Services [IIS], and Microsoft Operations Manager [MOM]) or multiple SQL Server instances. You cannot do this amount of granular control through existing SQL Server- based tools. Do not use WSRM to do anything related to processor affinity or memory management for SQL Server.

Transferring Logins, Users, and Other Objects to the Standby

When you are looking to have a server function as a standby, it needs to be functionally in sync with your production database. This means that logins and any other objects that exist on your primary database have to be on your standby. With failover clustering, that is not a worry, as the entire instance moves to another node, so you get not only the same database, but also essentially the same server. With log shipping, replication, and possibly backup and restore, you are not guaranteed to get all objects on your standby, and you will have to institute processes to ensure that in the event of a problem, you can flip the switch and users will not notice any difference in your standby.

Transferring Logins, Users, and Other Objects Between Instances

Although this topic was somewhat covered in Chapter 7, Log Shipping, with a more focused approach on log shipping, this is a generic problem that you will have with warm standbys. You have two levels to worry about: the server- level login, as well as the user that is in the database. If you transfer just the database login, your users might not be able to connect because the login it is associated with does not exist in SQL Server.

Moving logins from one instance to another is perhaps the easiest problem to tackle. One method, which is covered in the first task in section entitled Step 3: Post-Wizard Configuration Tasks in Chapter 7, is to use the DTS Transfer Logins task, with its corresponding task, to move the users by BCPing data out of syslogins.

If you do not move your logins, you will see an error similar to the following when applications or users try to access the database:

When you move over your logins, you might have what is known as an orphaned user. An orphaned user is one that exists in the database but whose system identifier (SID) does not match a login or exist as a login on the new server. To see if you have any orphaned users, you can execute the following Transact -SQL statement to give you a list of all orphaned users:

Sp_helplogins might also assist you in your debugging process, as it will show you all information about a specific login. Another procedure that might help you is sp_validatelogins , which will tell you if you have Windows users or groups that no longer exist but are mapped to logins in SQL Server.

To map your logins, you can use a tool provided by Microsoft Support Services named MapSids, which can be found at http://download.microsoft.com/download/sqlsvr2000/utility/5.0/win98me/en-us/Mapsids.exe . This will create two stored procedures on your SQL Server. Follow the instructions found in Knowledge Base articles 240872, HOW TO: Resolve Permission Issues When You Move a Database Between Servers That Are Running SQL Server and 298897, SAMPLE: Mapsids.exe Helps Map SIDs Between User and Master Databases When Database Is Moved on how to map your SIDs using these stored procedures.

For example, if you wanted to change the database login that the database user Fred is mapped to, you would execute the statement below. However, as of SP3, you cannot create logins with NULL passwords, so you will have to ensure that the login you are mapping to has a password.

Database objects come in a variety of categories ”stored procedures, table definitions, permissions, jobs, triggers, and so on. One of the easiest and most recommended ways of moving objects is to generate a SQL script. The script would be one that you coded to initially get the object into SQL Server, or, if you used the GUI of Enterprise Manager, using Enterprise Manager to generate the script. You can script most objects created within Enterprise Manager directly by selecting it, right-clicking, selecting All Tasks, and then selecting Generate SQL Script. Three tabs are in the Generate SQL Scripts dialog box.

The first tab of the Generate SQL Scripts dialog box, General, is where you select the objects that will be scripted. An example is shown in Figure 14-14. 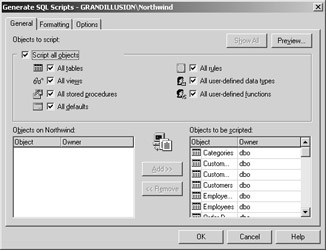 The Formatting tab, shown in Figure 14-15, allows you to control how your files look after they are scripted. 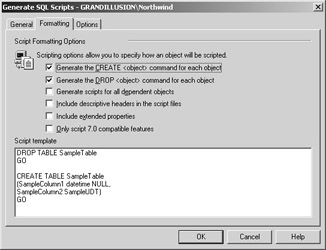 The Options tab shown in Figure 14-16 is an important tab. It is where you select primary/foreign keys, permissions, logins, and such to be included in the .sql file. If you do not select options such as Script Object-Level Permissions, you might not be able to correctly use the script if you ever need to use it as, say, part of a disaster recovery plan. 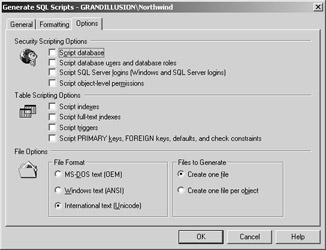 When you are done, click OK, and you will be prompted for a location in which to save your .sql file.

If you are scripting SQL Server Agent Jobs, Alerts, or Operators, the dialog box is a bit different. The three are nearly identical, and the Jobs dialog box is shown in Figure 14-17. However, unlike generating scripts for all jobs at once, you do it for each job. You can then combine the output scripts into one master script, but there is no way through the GUI to select more than one job at once. 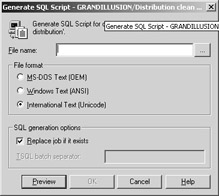 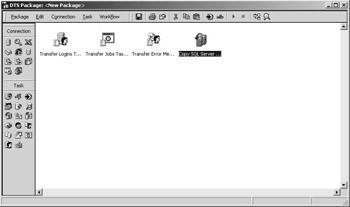 The Transfer Logins Task, Transfer Jobs Task, and the Transfer Error Messages Task all have similar dialog boxes: they have three tabs ”Source, Destination, and a tab to select the login(s)/job(s)/or message(s) you want to send. An example is shown in Figure 14-19. 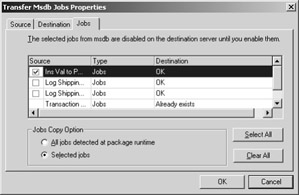 The Copy SQL Server Objects Task dialog box is different. It also has three tabs, but the third tab, Copy, is more like the Generate SQL Scripts dialog box. An example is shown in Figure 14-20. By default, this task will also copy your data. You will want to deselect the Copy Data option. By default, it will also copy all objects and use default options. If you want to send only selected objects, clear Copy All Objects and click Select Objects. You will then be presented with the Select Objects dialog box to choose what you want. Similarly, if you want to control the default options that will govern the task, clear Use Default Options and click Options. You will see the Advanced Copy Options dialog box. 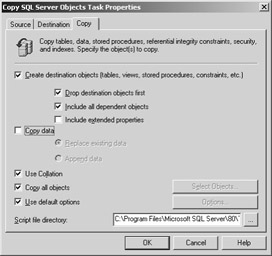 To create a DTS package, do the following:

DTS packages are a bit different. They are not transferred through the transaction log. To move a DTS package, follow these steps: