One of the handiest and most popular multimedia programs on your system is Grip. Grip allows you to rip (copy) WAV files from audio CDs and save those files as is, or encode them as (convert them to) compressed Ogg or MP3 files for your own personal use, on either your computer or an external device, such as Apple’s iPod (though iPod cannot as of yet play Ogg files; not that many players can).

The process for ripping a CD and saving the tracks as WAV files, or of rip- ping the CD and then encoding its files in the Ogg file format is quite simple. Grip, as configured in Fedora, is already set up to do it quite well. To start, just place the audio CD you want to rip in your drive. The GNOME CD Player will then automatically start, but you don’t need it for this ripping endeavor, so you can close it. Then, go to the Main menu and select Sound & Video > More Sound & Video Applications > Grip.

Grip will open, and after a couple of seconds it will display the contents of the CD in your drive. Assuming you are connected to the Internet when doing this, Grip will also list the title of the album, the artist who recorded it, and the titles of all of the songs on the CD (see Figure 13-1). 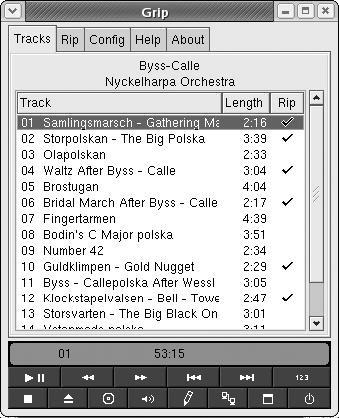 Once the songs are displayed in the Grip window, you can select the songs you want to rip by clicking next to the titles under the Rip column. Or if you want to rip them all, you can just click the heading Rip at the top of that column. After you have made your selections, click the Rip tab to display the Rip page (see Figure 13-2). 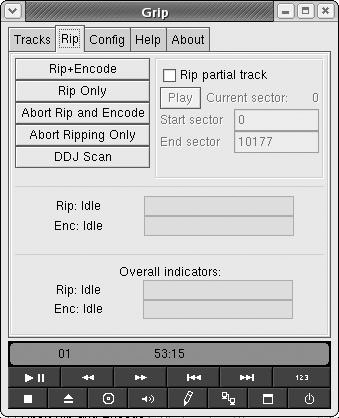 Figure 13-2: Choosing to just rip or rip and encode in Grip

If you just want to rip the tracks and save them as WAV files (which take up a lot of disk space), you can click the Rip Only button, and the ripping process will begin. If you want to rip the files and encode them in the much smaller Ogg format for playback on your own computer, click Rip + Encode, and Grip will begin to rip and then encode the files simultaneously. The encoding process will take longer than the ripping.

Once Grip has done its work and has ejected your CD, you will find your new files on your hard disk in the ogg folder inside your user’s Home folder. If you didn’t create an ogg folder when doing the projects in Chapter 5, Grip will have automatically created one for you. If you clicked the Rip + Encode button to encode your files in the Ogg format, Grip will also have deleted the space-wasting WAV files that it ripped from the CD.

A folder for the artist will have been created inside your ogg folder, there will be a folder for the album inside the newly created artist folder, and the ripped (and possibly encoded) files will be within the album folder. Thus, if you ripped a CD called Orange Lightning Water by Chuck Rumsfoord and the Venutians, you would find your files in ogg/chuck_rumsfoord_and_the_venutians/orange_ lightning_water. Grip will also create an M3U playlist for the album outside of the artist folder (with an .m3u filename extension). Double-clicking that file will start up your default audio player, which will load the entire song list for that album and then start playing it all. Very handy.

Although I, as well as most Linux users, prefer the Ogg Vorbis format to that of MP3, there are many who need or want to encode files as MP3s. This is particularly true if you have an iPod-like player that cannot support Ogg files as of yet.

Fedora does not come with any native MP3 support, and the Grip application cannot encode MP3 files without such support. Without knowing it, however, you already provided Grip with the capacity to do this when you installed MPlayer in Chapter 10 using APT/Synaptic. One of the dependencies for MPlayer that APT/Synaptic downloaded and installed on your system was a program called LAME, which is an MP3 encoding program. This being the case, you are all ready to go. (I told you that those dependencies would come in handy later.)

To set up Grip so that it will encode MP3 files instead of Ogg files, click the Config tab in the main Grip window, and in the Config window click the Encode tab. This will bring up the page with encoder settings (see Figure 13-3). On this page, select lame from the Encoder drop-down list. Then, in the Encode file format box at the bottom of the page, change the ending in the existing string from .ogg to .mp3. That’s all there is to it. 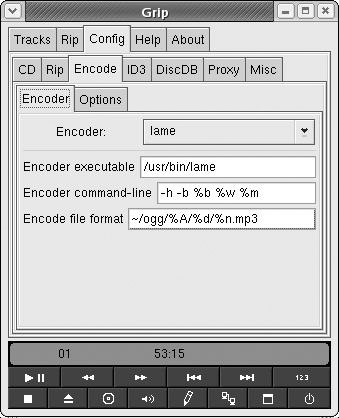 If you want to go back to Ogg encoding, just change the .mp3 ending back to .ogg in the bottom box, and select oggenc in the Encoder drop-down list.