Access uses Jet SQL. In fact, Access uses Jet SQL every time you run a query. You probably create a query in the Query Design window and then simply execute the query as needed without giving the relationship between that query and Jet SQL much thought. The Query Design window is a graphical interface, and Jet SQL doesn't talk in those terms. Instead, Jet SQL converts your graphically expressed question so that Jet (Access's database engine) can process your query. You're just unaware of the behind-the-scenes processes that occur between the time you execute your query and Jet returns the results.

The truth is, Access relies heavily on Jet SQL for almost all processing. That's why learning Jet SQL is an important part of using Access, whether you're working with a single-user desktop application or creating a data-driven website. In this section, you'll learn how Access uses Jet SQL.

The Query Design window isn't the only place you'll see Jet SQL pop up in your applications. Besides queries, you'll use Jet SQL statements as the data source for a number of objects (forms, reports, and controls) and code. In this section, we'll show you how to actually write and use Jet SQL statements in Access objects and code. If you're familiar with Jet SQL's relationship with Access, you can probably skip this section.

Open any query in Query Design view, and you'll see the graphical interface that lets you communicate with Jet without knowing its language of choice (Jet SQL). For instance, Figure 9.2 shows the Employee Sales by Country query from Northwind—the sample database that comes with Access— in Query Design view.

Figure 9.2: Query Design view reveals a lot about a query.

From the Query Design window we can learn a lot:

Now, let's examine the Jet SQL equivalent to this query. To do so, click the View button on the Query Design toolbar and choose SQL View.

The Jet SQL statement is fairly complicated and identifies the following:

Most Access objects have a specific data source. For instance, a form or a report is (usually) bound to a particular table or query. Controls also have a data source—a list or combo box might limit you to a list of items that the control captured from a table or query.

A quick example is available in the Northwind Products form. Figure 9.4, shows this form open in Query Design view, and the Properties window is displaying properties for the SupplierID control. This combo box is bound to the SupplierID field in the Suppliers table, as noted in the Control Source property. 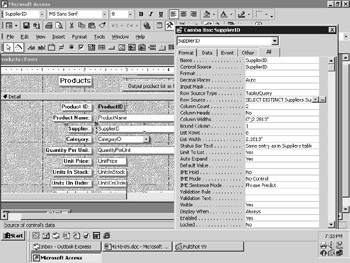 Right away you can see that the Row Source property is a Jet SQL statement. To see the entire statement, select the property and press Shift+F2 to view the property setting in the Zoom dialog box. The complete statement

retrieves a unique list of values from the SupplierID and CompanyName fields and sorts those entries by the CompanyName field. You can use the form to view, update, and enter new product information. Instead of typing the supplier, the user selects a supplier from the control's drop-down list, as shown in Figure 9.5. 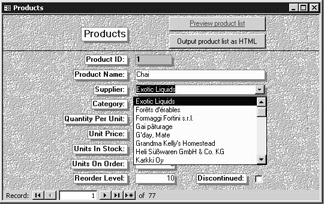 Figure 9.5: The Jet SQL statement populates the control with a unique list of suppliers.

Many developers use Jet SQL statements to populate forms, reports, and controls. You can do so too, even if you don't know Jet SQL well enough to write the statements yourself. Simply create the appropriate query in the Query Design window. If the setting refers to a fixed query, open that query. Then, open the SQL window, highlight the statement, and press Ctrl+C to copy the SQL statement to the Clipboard. Next, select the appropriate form, report, or control property and press Ctrl+V to paste the statement into the Property field. The fixed query is no longer necessary. You can discard it without saving it, or delete it. Both the fixed query and the Jet SQL statement are optimized, so neither has an edge on performance. Using Jet SQL statements instead of fixed queries has only one real advantage—it removes clutter from the Database window.

Most likely you'll never use the first two methods when connecting to a website, so we'll review just the last two. In addition, most of the scripting languages you'll use to interact with an Access database provide their own versions of the Connection and Command objects. The following is simply a review of the equivalent ADO objects you'll use in Access.

In this expression, cnn represents the Connection object, validSQLstatement is any valid SQL statement, recordcount stores the number of records modified by the action, and options indicates how the provider evaluates validSQLstatement (see Table 9.6).

The following code sets a Connection object's Connection property to the current Access Project and then executes a SQL statement:

In this code, validSQLstatement is any valid SQL statement.

The following code uses the Open method to establish an external connection to the Northwind sample database:

Although this chapter is about Access, Table 9.8 lists other provider strings.

If there's any chance your Access application will be upsized, use the Command object since it's more compatible with SQL Server. This object is used more frequently in ADP (Access Projects), but both Access and SQL Server Desktop support the Command object. The Command object represents a SQL statement, a stored procedure, or a command that's processed by the data source.

Use the following syntax to create and establish a connection via the Command object:

In this example, validconnectionstring is CurrentProject.Connection or a combination of the arguments listed in Table 9.7. If populating a Recordset object, replace the Execute method with the following statement:

In the earlier section, "Built-in Functions," we looked at a number of functions, including Domain functions that consider an entire set of records. You can use these built-in Domain functions with VBA, but you can't use them in SQL statements. Fortunately, SQL provides a number of equivalents, known as SQL aggregates.

The main difference, besides the environment in which you can use these functions, is that SQL aggregates can't be limited by criteria as Domain functions can. SQL aggregates accept only one argument—a reference to a field or an expression that refers to a field. Remember that the field always refers to the underlying data source, and not to a form, a report, or a control. Table 9.9 lists the SQL aggregate functions.