Building Flash 5 components is more of an art than building Flash MX components; it takes time and quite a few neat tricks to make it work. At the beginning of the chapter, I said that nearly every MX component could be made to be Flash 5-compatible. This is true, but it is not without a little bit of extra work. Realize that you cannot use any MX-specific commands, such as the drawing methods, and you cannot directly set up the relationship between code and graphics via registerClass.

Something new to Flash MX, which should have been added a long time ago, is the ability to save the FLA file in the format of a past version of Flash. This means you can work in the Flash MX authoring environment but save the file as Flash 5, provided that you do not use any MX commands.

Let's demonstrate making Flash 5 components by making the Particles component from Chapter 10 to be Flash 5-compatible. Follow these steps:

At this point, if you look in the Component Definition dialog box again, you will see that all Number and String data types have been changed to Default. Flash 5 components can have only three data types: Array, List, and Default. However, the Default behaves the exact same way as String. Furthermore, if you look in the side panel of any Actions window (see Figure 12.7), you can see the commands that cannot be used-the ones that are highlighted yellow. 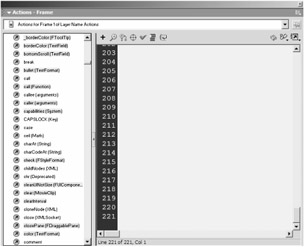 Figure 12.7: Commands that cannot be used in Flash 5 are highlighted yellow.

We now need to modify the code for the component to be Flash 5-compliant. We cannot use the two-part inheritance that associates the component with the code anymore, but we can do our best to approximate it. First, we remove the commands #initclip and #endinitclip from the top and bottom of the actions, as they cannot be used in Flash 5. Also, delete these two lines from the actions:

The good news is that the component's class can be used with only a few changes. The first change we need to make is to set the parameters of the component in the class somehow. You can do this manually by going through each parameter and attaching its respective variable to the class via the prototype object. For our component, you can use the code in Listing 12.3.

Notice that we have wrapped the parameters that need to be of Number data type with the Number object in order to safely convert its data type. The actions in Listing 12.3 directly create new properties in the class for every parameter in the component.

Previously, we could simply use the keyword this to refer to the Timeline of the component, but we no longer have the luxury. Instead, we are going to create an extra property in the class named timeline, which will hold a reference to the component's Timeline.

Now, we must take on the painstaking task of going through the entire class and finding all references to the component's Timeline, and replacing that reference with the newly added timeline property. Fortunately for us, our component needs only about five corrections. The first appears in the class constructor where we referenced this._x and this._y; it should be changed to this:

Next, in the create_particle method, we encounter the bit of code that attaches a random particle to the stage. Instead of attaching a movie to this, we now need to attach to this.timeline. Also, before, we were using the fact that attachMovie returns a reference of the newly attached movie clip, but this is not the case in Flash 5. So, we need to get the reference to that attached movie ourselves. It is done with this code:

Now, we have all the functionality of the component bundled up into the instance of the class; how do we unleash its power? We need some way of firing the various event handlers of the component, such as onEnterFrame or onMouseDown. The way you could determine things like mouse down, key down, and so on is through the user of onClipEvent. It provides the means to detect all of the event handlers that were provided in Flash MX. And, luckily enough, we have a movie clip that does not have an entirely useful purpose in our component: the label movie clip. We can add movie events to the label movie clip that will fire all the various events that were written in the component's class. In the particular case of our component, we used only one event: onEnterFrame. But typically a component will use many events, so we fire every event from the onClipEvent actions in the label. Listing 12.4 shows how it is done.

Listing 12.4: Using a Movie Clip's onClipEvent Actions to Fire the Events of the Component

This provides Flash MX functionality through Flash 5 commands. The component is almost entirely functional. The only parts of the component that need to be changed are the methods that we added to give the user control over the component through the use of ActionScript. These are methods that stop and start the stream, change the frame delay, and so on. In order to have those methods provide the same type of functionality as they do in MX, the user needs access to them as if they were directly attached to the movie clip. We can accomplish this by creating intermediate functions that are directly attached to the movie clip, and all they do is call the corresponding methods in the component class. Listing 12.5 shows the code that accomplishes this.

Listing 12.5: Functions to Handle ActionScript-Related Functionality That You Have Given to the User

With the last line written, you are done converting a Flash MX component to Flash 5. The process was not entirely tedious, and in the end it is definitely worth it. Be warned that sometimes in the middle of the development process, you might hit Ctrl+S to save the file, and Flash will suddenly inform you that you are using a Flash MX element and the file must be saved in the MX format. Don't worry when this happens; simply hit Cancel and do the Save As routine to save the file as Flash 5. Flash will again warn you that all Flash MX-related content will be removed, at which point you can see what MX-specific elements you accidentally used.