To view a list of groups (Figure 9-1), select Server Management from the Start menu and then click Security Groups in the console tree. 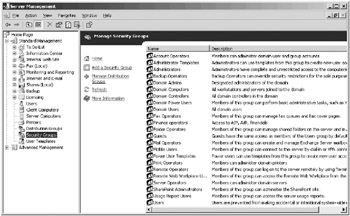 All the built-in universal groups, which are described in Table 9-1, are specific to Windows Small Business Server. With few exceptions, these are the groups that all users belong to and that are used to make templates. Templates are discussed in more detail later in the chapter.