Installing an extension from Mozilla Update couldn't be easier. When you find an extension you like, click the Install Now link. Firefox asks you to confirm the decision, as shown in Figure 20-2. Click Install Now to continue. 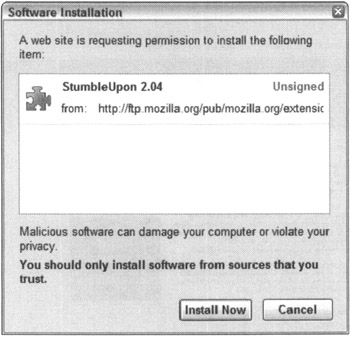 Firefox opens the Extension Manager to display the installation progress. Installation is typically very fast, and when it finishes, you need to restart Firefox before the extension will take effect. After restarting, see "Using Extensions" later in this chapter for more information.

Installing from another site

Mozilla Update is not the only place to find great extensions. Many developers offer their extensions on their own Web sites, and you can find these by searching the Web for Firefox extensions. There are also some sites that aggregate high-quality extensions, just like Mozilla Update, including the following:

Firefox blocks the installation of extensions from other Web sites because they might be broken or unsafe. When this happens, a toolbar appears at the top of the Web site, as shown in Figure 20-3. 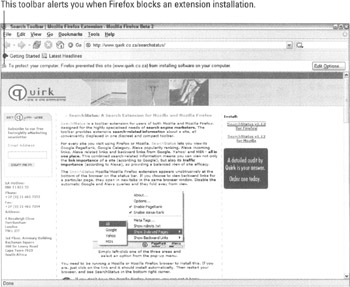 Figure 20-3: By default, Firefox prevents any site other than Mozilla Update from installing an extension, but displays this toolbar so you can override the policy.

To continue with installation, you need to verify that you trust the site:

Now that the site is in the trusted list, the installation process is the same as on Mozilla Update. Click the install link again and follow the directions in the earlier section, "Installing from Mozilla Update."