Chapter 12: Things Not to Do with a Computer

Many of us have heard of how the PC user called in to say his cup holder was not working on his computer only to find out he was referring to his CD drive. Well, that's obviously a silly thing to do, but following are some less obvious but also not-so-wise things to do with your computer.

The switch on the back of the power supply that says 115/230 is not to be used to see if there is a problem with the power by switching it back and forth.

No matter how much you think you know, make it a rule never to plug in a new USB device until you read the manual. In most cases, the software has to be installed first or in a specific manner, and by skipping the proper steps, you might waste a lot of time trying to get the device to work correctly.

We are constantly getting laptop computers in the shop for repair due to all types of liquids spilling on the keyboard that were kept right next to it. Unlike a desktop computer where the keyboard is a separate and usually inexpensive peripheral, the notebook keyboard is directly over the circuitry of the computer, and the liquid will wick its way into every crevice and corrode and short out the system. Don't do as the user in Figure 12.1; keep your drinks and food away from electronics. 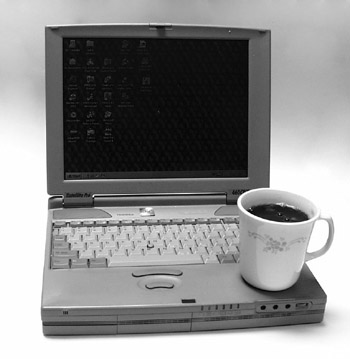 Speaking of spilling liquids on the laptop, customers often turn on their laptops after only wiping the outside of it right after the spill. Basic science tells us that will only ensure more, and most likely permanent and possibly fatal, damage. We try to tell all of our customers that if a spill ever occurs to immediately remove the battery, unplug the laptop, turn it upside down to minimize migration of the liquid into the components, and bring it to a qualified technician right away to be cleaned out. Never let your curiosity force you to turn it back on.

A customer recently walked into the shop and asked if we could test his Pentium 4 processor. When asked if he had it with him, he retrieved it from his pocket and held it up proudly by the corners. It might have been working before he brought it in, but its chances started decreasing when he handled it that way. Do not ever handle a static-sensitive component (processors, memory, add-in cards, etc.) with your bare hands unless you are wearing a wrist strap and using precautions to ground yourself and prevent static discharge.

Another customer brought in his server because it was dead. We checked it out and discovered a 1/4-inch gap between the processor and its heat sink. We removed the heat sink and found globs of thermal transfer compound—so much that the heat sink didn't make good contact with the processor—and there was a thermal pad as well. Now, the ironic thing is that this customer is obsessed with cooling. There were two fans on the processor and various case fans. However, his failure to follow directions (see Chapter 3, "Motherboards and Their Components") caused his CPU to overheat and fail. The rule: use either a thermal pad or a small amount of thermal transfer compound, and make sure that the heat sink is flush against the processor.

One time a customer called and frantically explained that his video disappeared, and he needed his computer for business right away. He was willing to buy a new monitor. We told him to bring in his computer and monitor. When we checked out the monitor, we found that the brightness had been turned all the way down. The lesson here is to always check the simplest, most obvious things first.

Often, when a PC comes in to the shop it has loose wires hanging inside even though the original system builder took the time to tie the wires. The problem was that they used rubber bands, and the rubber bands had rotted away from age and the heat within a computer. Another thing we have seen is shorted wiring from twist ties. When the paper on a twist ties dries up and goes away, all that is left is a thin metal wire that can wear through insulation and short out connections. When you tie up all the wires inside your computer to make them look neat and to help increase the airflow for cooling, use nylon zip ties or nylon wire restraints and clips designed for the purpose. They are easier to work with and will last much longer.

Up in the cooler climates, we occasionally have PCs come in for freeze-ups or damage that cannot be immediately explained, until we find out that the computer is kept right next to a radiator or heating vent.

One of the frequent cause of problems in PCs we see is viruses. Most name brand computers come with some form of virus protection. Usually, it is good for one year or is a three-month trial version. When we ask the customers if they have virus protection, they say yes. When we ask them if it is up to date, they usually assume that you install it and forget it and you are protected forever. After they get the bill to clean out the virus and save the data on the computer, they rarely forget to stay up to date.

On that note, many people out there cannot believe they got a virus because they do not open attachments or open e-mails only from people they know. They forget or do not know that the virus can come from an e-mail sent from their friend's or family member's PC without their knowledge. Additionally, viruses can come over the Web, even if there is no browser open. In fact, my virus detection software detected and cleaned a virus while I was researching links on a Web site while writing this chapter.

Another less technical but important issue is the choice of cabinets for computers. While many computers are getting smaller all the time, we constantly see customers choosing a computer desk or cabinet that does not fit the case. I recently installed a pair of computer systems at a home and the new furniture had arrived and was installed. The so-called computer desks looked great, but the first thing I noticed was that the shelf for the PC had a door and only one small hole for the cables in the back. There was no consideration of ventilation, or cabling, and you had to open the door just to insert a CD, DVD, or floppy disk. Things worked out after I opened the backs and installed small bumpers on the doors so they would allow some ventilation. Often, the problem is size, and there is no room for the computer once it is in place with all the cables attached. It sometimes seems as if the designers of computer office furniture forget that they have to accommodate machines with cables attached and the need for ventilation.

Many times, I have been called upon to work with a small business that has two or more PCs they purchased at a big box store or online, and now they want to be able to take advantage of networking or need a server to accommodate their needs and growth. The assumption of many of these customers is that a computer is a computer, and one for home is the same as one for business, and the only difference is the work they are doing on them. That cannot be further from the truth. The difference between a professional versus home version of Windows when purchasing a new PC is usually $60 to $90 dollars versus approximately $180 dollars to upgrade later. Most home PCs come with a home suite of programs to keep the cost of the PC lower and more attractive to the buyers. However, Microsoft Office Professional or a similar office suite at the time of purchase will cost you about $300 now, or you can buy the full product later for about $600. The point here is that consulting an expert first will probably save you time and money in the long term.