Execution properties modify and control how entire packages as well as individual tasks execute. In this section, you will learn to configure the number of tasks that will be executed in parallel, the execution priority of packages and tasks , and the point at which a task failure constitutes a package failure. You will also learn how to work with tasks that are not free-threaded.

After you determine which tasks you want to execute in parallel and you ensure that each task needing to execute simultaneously has a separate connection object, you must decide how many tasks you actually want DTS to execute in parallel. By default, the maximum number of tasks that DTS can execute in parallel is four. You can increase the performance of a well-designed data movement application on a multiprocessor computer by increasing the number of steps that execute concurrently in each package. If, however, you set the number of concurrently executing steps too high, the overall performance of the data movement application can suffer because the processors will be switching between tasks rather than finishing each task sequentially.

You can use DTS Designer to configure the maximum number of tasks that execute concurrently in a package in the Properties dialog box for the package. Figure 5-1 displays the properties of the MasterUpdate package that you created in Chapter 4. 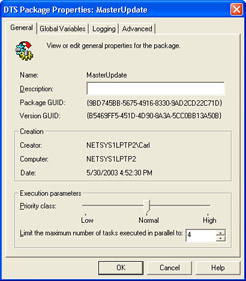 Figure 5-1: Properties of the MasterUpdate package

Notice that the MasterUpdate package is configured to execute up to four tasks in parallel. You can increase or decrease the number of tasks that will execute in parallel at run time by dynamically changing the MaxConcurrentSteps property of the package. (For more information about changing package and task properties at run time, see Chapter 6.)

In a modularized data movement application, you can control the number of subpackages that are executed simultaneously from a master package by configuring the number of tasks that execute concurrently. Figure 5-2 displays the MasterUpdate package that you created in Chapter 4. This package contains two Execute Package tasks that update dimensions in the Sales cube. In a complex Analysis Services cube, you might have 15 to 20 dimensions, each of which is updated using a separate subpackage. 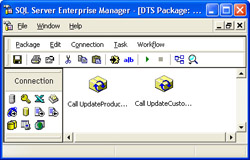 The two subpackages called by this master package will execute concurrently because the package does not contain precedence constraints, the number of packages in the package does not exceed the number of tasks that can execute in parallel, and the tasks in the subpackages have their own connection objects. As you add Execute Package tasks to a master package, you will quickly exceed the number of packages that executes concurrently unless you increase the setting for parallelism. However, the number of tasks that you actually want to execute in parallel on any particular computer depends upon the number of processors on that computer and the other tasks on that computer that are competing for processor resources. You can increase or decrease the number of subpackages that executes concurrently in your modular data movement application by using only the parallelism setting. This design enables you to develop and test the data movement application on one computer and then tune its performance in the production environment without having to edit each individual subpackage.

You can use DTS Designer to increase or decrease the priority of a package relative to other applications in the package s Properties dialog box, which was shown in Figure 5-1. You can also set this value at run time by changing the PackagePriorityClass property of the package.

By default, all package tasks inherit the thread priority of the package, and tasks that execute in parallel execute with equal priority. You can use DTS Designer to increase or decrease the priority of a task within a package relative to other tasks on the Options tab of the task s Workflow Properties dialog box. Figure 5-3 displays this dialog box for the DTSStep_DTSExecutePackageTask_1 step in the MasterUpdate package. This is the step that executes the Execute Package task and calls the UpdateProductDim subpackage. Execution priority is determined by a property of the step; it is not a function of the task itself. 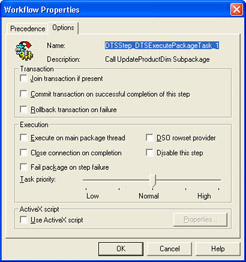 Figure 5-3: Options tab of the Workflow Properties dialog box for the DTSStep_DTSExecutePackageTask_1 step

You can also set this task priority value at run time by changing the RelativePriority property of the step. In the data movement application you are building, all packages and tasks will execute at normal priority.

Configuring the Definition of Package Failure

Another execution property that you can set is the definition of package failure. If a package completes all the tasks within it (regardless of their success or failure), the package completes successfully unless you define the failure of a particular task as a package failure. You can use DTS Designer to configure a task so that its failure will cause the entire package to fail. You set this definition on the Options tab of the task s Workflow Properties dialog box. (See Figure 5-3.) If you call a subpackage from a master package by using the Execute Package task and configure the failure of one of its steps to cause it to fail, the failure of the step in the subpackage will cause the failure of the master package and all its subpackages. In the data movement application you are building, you will not configure the failure of any particular task to cause the failure of the entire data movement application. Rather, you will use error handling routines to capture error information to enable you to recover from errors. For more information, see Chapter 8.

Working with Tasks That Are Not Free-Threaded

The other execution property of a step that you might need to configure is the execution thread on which the task will execute. DTS executes each task on a separate thread unless you configure a step to execute a task on the main package thread. Spawning new threads for each task enables DTS to take advantage of the operating system s ability to distribute execution threads among available processors. Executing tasks on separate threads increases the performance of DTS packages, particularly when the tasks execute on computers with multiple processors. However, tasks that use an OLE DB provider that is not free- threaded, or that were developed using a language not supporting the Free- Threaded model (or the Apartment Threading model), must execute on the main thread. (You can use DTS Designer to specify whether a task executes on the main thread or on its own thread by modifying the properties of the step that executes the task in the task s Workflow Properties dialog box.) Microsoft Visual Basic tasks, such as the Analysis Services Processing task or custom Visual Basic tasks, are not free-threaded. The following providers are not free- threaded:

The Guru's Guide to Transact-SQL