Visualisation facilitates the perception of patterns and structure within data mining results. However, a static presentation in itself is often inadequate and interactive capabilities are required to allow effective exploration of the visualisation. This relates to Shneiderman's visual information seeking mantra, which stated that the initial view is qualitative and of an overview nature and that through interaction the user can proceed to focus upon interesting subareas for more quantitative analysis.

Interaction occurs at many different levels, as illustrated by the layered interaction model, shown in Table 2. This model identifies a sequence of interaction levels that build upon each other, illustrating that a interaction requirement can be broken into different levels of abstraction, ranging from the subjective goals of the interaction through to the physical I/O of the interaction. There is however a definite shift between the concept-based upper levels and the activity-based lower levels, indicating a transition between what is required and how it is done. The mapping or transformation between the concept and activity levels of interaction is known as direct manipulation and occurs at the junction of the syntactic and semantic levels. This section discusses the exploration of presentations through direct manipulation and the use of views to facilitate understanding in large complex visualisations.

Direct manipulation can be defined as the mapping between the semantic and syntactic levels of the layered interaction model (refer to Table 2). The objective in constructing this mapping is to create as close a match as possible between the structure of how users think about a task and the activity used in solving it, while attempting to maximise problem domain compatibility (John, Rosenbloom & Newell, 1985). Direct manipulation design affects the interactive quality of the system, including error frequency, speed of task performance, and user skill retention (Buxton, 1986).

There is not always a single best set of interaction capabilities for a particular visualisation. Not all users have the same mental model, and even for a single user the mental model may differ depending upon the user's current goals. Therefore the optimal solution is an intuitive set of mappings that mimic real-world activities. For example, the task of moving a file in a paper-based office involves going to the relevant filing cabinet, removing the required file and carrying it to its new location. Intuitively the same task on a computer system should follow the same steps. Graphical interfaces provide this capability by representing data as graphical icons and encapsulating activities within interaction mappings. So the movement of a piece of data within the computer system will generally involve selecting the relevant icon and dragging it to its new location. Importantly, the syntax of operations in an interaction command should closely correspond to the data's required semantic changes, and the screen representation should reflect these changes.

Graphical-level interaction is based upon selection and navigation activities that are specified to the computer by the user through pointing devices. Selection is the designation of a point of interest within the graphical interface, signified through an action such as clicking a mouse button or pressing a key. Navigation is the movement of the interest focus, which is generally accomplished through a continuous activity such as moving the mouse or holding down specific keys. These primitives work together within different environments to provide the means by which any presentation may be explored in a detailed manner.

As there are an arbitrary number of semantic tasks that can be undertaken within a presentation, the overloading of an activity primitive such as selection is achieved by varying the graphical primitive specification. For example, the functionality required within a presentation environment might include the ability to delete items and to display item details in a pop-up dialog, both of which involve item selection. Overloading of the selection primitive is achieved by either varying the selection action for each semantic task or requiring a combination action either in sequence or parallel. Another technique used to combat overloading (especially in navigation) is indirect manipulation, whereby the presentation is manipulated through interaction with associated graphic artefacts. A common example is the use of scroll-bars within presentation environments to provide navigation at both the screen and document levels. However, indirect manipulation techniques require that the user's focus be drawn away from the actual presentation and lessen the interactive experience (Koedinger, 1992). Mice with scroll-wheels overcome this by providing an additional form of vertical navigation, hence providing a means for direct navigation at both the screen and document levels.

3D presentations commonly provide more freedom but increase input overloading and hence the variation of actions required to effectively explore the environment. Alternatively the use of immersive presentation devices, such as headsets, and pointing devices that allow further degrees of freedom, such as flying mice and gloves, can increase the user's experience of direct interaction and reduce the mapping overload.

The provision of a succinct set of direct manipulation mappings is critical for effective presentation exploration. The level of interactive functionality provided is important as too little will constrain the exploration process and too much will result in interactive quality degradation. This degradation reflects the provision of too many functional alternatives, resulting in nonintuitive mappings and hence longer task times and less skill retention. Therefore good direct manipulation design involves the specification of a succinct intuitive set of mappings based upon selection and navigation primitives to facilitate the comprehensive exploration of a presentation.

Mining result sets are often large and complex, typically tens of thousands of items. Their size makes them difficult to entirely represent in a form conducive to understanding by the user. Large result sets produce cluttered presentations because of the larger number of graphical objects required to represent the underlying data and their discovered relationships. Additional problems occur in the presentation of hierarchical clustering semantics where separate presentations are required to display different hierarchical instances of the clustering.

Interactive views use direct and indirect manipulation methods to enhance user perception of a result through user-specified filtering of the result set so that only a subset is presented (Klemettinen et al., 1994; Ribarsky et al., 1999; Wills, 1998). Filter parameters are generally specified through indirect manipulation via interface controls and can involve threshold, parameter, and template specification and also control the participation of individual items and discovered relations. Threshold specification can be used in association rules to constrain the confidence and support parameters that provide heuristics as to the strength of the association and the importance of the item within the data set. By raising the required confidence threshold, the weaker rules will no longer be displayed. Templates can constrain the rule form. For example, the presentation can be limited to those rules that have only a single antecedent.

Clustering-based presentations are different in that the discovered relationships are global in nature unlike association mining where each relationship affects only a few items, therefore constraint of the presentation to a subset of clustered items is generally unwarranted. However Figure 26 shows how interactive views can be useful in presenting hierarchical clustering results. The user can change the number and hence levels of clustering viewed through the use of an associated slide bar. 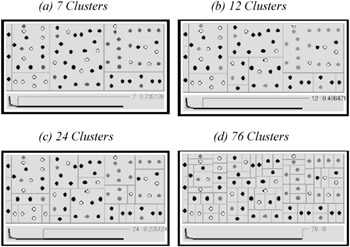 Research into the computer-based distortion of visualisations has seen the development of techniques such as bifocal displays (Spence & Apperley, 1982), fisheye views (Furnas, 1986), perspective walls (MacKinley, Robertson & Card, 1991) and frustum displays (Anderson, Smith & Zhang, 1996). The objective of distortion is to provide space for the magnification of an area of interest while providing context through compression of the rest of the image (Sheelagh, Carpendale, Cowperthwaite & Francis, 1997). This allows the user to focus on a particular presentation area while still maintaining a holistic view of the presentation. Without distortion techniques, zooming in on an area of interest can result in loss of context as objects move outside the viewable area, as illustrated in Figure 27.

Focus without context loss improves interpretation of the information presented because all relationships between the underlying data items are still evident at the same time as more detailed information about a particular item or set of items and their immediate surroundings. Although distortion focus is generally at a single point, as shown in Figure 27c, the technique can be extended to have multiple foci, which allows the scrutiny of many areas at once without context loss.

Distortion within 3D space can additionally provide a solution to the problem of occlusion, in which objects are hidden by others closer to the viewpoint. This concept is described by Sheelagh et al. (1997) and illustrated in Figure 28. This set of images shows an initial dense matrix of similar objects (Figure 28a) and the internal object of interest, indicated by colouration and enlargement (Figure 28b). However as the object of interest is internal it will always be occluded. The third image (Figure 28c) shows the use of visual access distortion, which clears the line of sight to the chosen focal region, providing an unobstructed focus.