There are three lobbies and a special level to play the World Champion in a winner-takes-all poker battle.

The first floor’s motif is based on the Roman era with Roman Doric columns, wooden carved doors, and a mirrored ceiling reflecting the plush Corinthian rug. 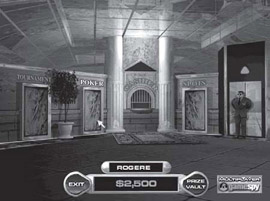 The second floor sends the player into the Orient where Ming vases shoot out spirals of flames, lighting up the walls of famous works of art from the Han dynasty. The floor is cushioned by a rare Oriental rug under a simplistic wooden ceiling. 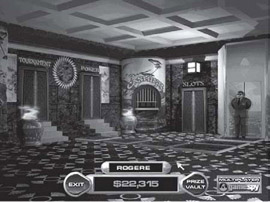 The third floor transports the player to the edge of the Nile, where pharaohs once ruled and the players enjoy visions of authentic Egyptian hieroglyphics, rare Egyptian doors from the throne of King Tutankamen, and an exotic rug from the temple of Cleopatra. The symbol of Ra, god of the sun appears as the wall torches flicker, adding to the illumination of the magnificent array of constellations that shine through the high glass ceiling.

If a player hasn’t earned enough reputation points to enter the elevator to the next floor, a security guard blocks the entrance to the elevator. 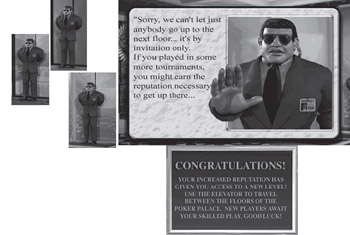