There are several types of Windows Forms applications, most of which are perfectly straightforward to debug. The following section describes some aspects of the debugging process that may not be completely straightforward.

Although debugging class libraries is very similar to normal Windows Forms debugging, there are a few subtleties that are worth noting. In this debugging session, the class library is automatically loaded by the application, but it's common to have situations where you're debugging a solution that contains a class library but doesn't contain an application to launch it. In this case, you need to go to the project's Properties ’ Configuration Properties ’ Debugging page, as shown in Figure 7-5. 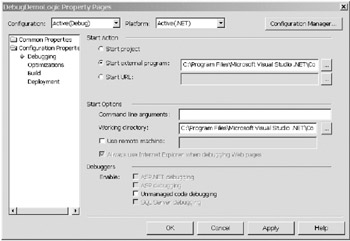 Occasionally, you can find that there are multiple copies of your class library spread around your hard disk, and your solution doesn't load the one that you were expecting. If the class library was installed into the global assembly cache (GAC) so that it could be shared with other applications, this can take precedence of any local copy, which can be confusing. To verify the load path of your class library, go to the Modules window and check the Path column of the module. This will tell you which location was used to load the class library.

Sometimes your application crashes in an unknown class library or in a system DLL. If all that you know is a crash address, you can rerun your application and go to the ever-helpful Modules window. If you sort the module list using the Address column, you can find the module that instigated the crash by finding the class library whose address range contains the crash location.

A final point is that if the application that uses your class library was written using unmanaged code, you need to go to the project's Properties ’ Configuration Properties ’ Debugging page and select the "Unmanaged code debugging" option.

To debug a Windows Forms control where you have access to the source, you normally have to add that control's project to the solution that uses the control. If you don't want to import the whole control project, you can instead add just the control's source modules in which you're interested.

To illustrate this, I created a new Windows Forms control that inherits and extends the standard TextBox control to permit the entry of positive integers only. To try this control, load the DebugDemo solution discussed previously and go to the Tools ’ Customize Toolbox menu item. Click the .NET Framework Components tab. Then click the Browse button and navigate to the \DebugDemoControl\bin folder. Here you can add the DebugDemoControl.dll control to the Toolbox so that you're able to start using the control. The NumericTextBox control should now appear in the General tab of the Toolbox.

After you bring the DemoForm form to the front in the IDE Source window, drag the NumericTextBox control from the Toolbox and drop it on the form. If you run the solution and try to type text into this customized text box, you'll find that you can only type numbers into the control ”all other keys are suppressed.

Assuming that you wanted to debug this control, you don't need to add the control's entire project. Instead, go to the File ’ Add Existing Item menu item and navigate to the \DebugDemoControl folder. Double-click the NumericTextBox.vb file, which will add the source code for the control to your solution. With the source code for the control displayed in the Source window, you can set a breakpoint for the control that will be hit as normal. When you've finished debugging the control, right-click the newly added file in Solution Explorer and select the Remove menu item. This is a quick and nonintrusive way of debugging external class libraries and controls that are used by your solutions.

As you can see, the control's DebugMode property is set to false by default, but it can be set to true if the control's user wants to see the debug events. The KeyPress event supplies a debugging comment, in this case a remark showing the non-numeric character that was suppressed. The ShowDebugMessage procedure decides whether to raise the debug event depending on the setting of the DebugMode property and also adds the name of the procedure that produced the debug comment. Finally, it raises the DebugMessage event to the control's container.

Now you can look at these control debug events from the viewpoint of the control's user. Listing 7-2 shows some code that might be written in the control's container, in this case a standard Windows form.

In the Form_Load event, the control's DebugMode property is set to true so that the control's debug events can be monitored . Then, in this example, every debug message raised by the control is displayed in a message box. In reality, all of this debugging information would more likely be written to a trace listener, a log file, or some other form of logging. This is a valuable debugging aid because it enables the control's user to monitor and understand the control's behavior and, if necessary, report any problems to the control's author with some evidence to confirm the problem report.

Debugging a Visual Studio add-in is slightly different from debugging most other application types. To show this, I created an add-in called DebugAddIn , represented by the solution that you can find in the \DebugAddIn folder. This simple add-in merely pops up a message box, but it's functional enough to demonstrate add-in debugging.

Once you've loaded the solution into Visual Studio, put a breakpoint on line 67, where the message box is displayed. Then check the DebugAddIn project's Properties ’ Configuration Properties ’ Debugging property page, where you can see that the wizard that created this add-in specified that the project should be started using the external program devenv.exe, which is the Visual Studio executable.

You can now debug as normal, but when you've finished debugging you should always close the add-in and the second Visual Studio instance before closing the first instance.