A site definition is the top-level component in WSS that aggregates smaller, more modular definitions to create a complete site template that can be used to provision sites. For example, a site definition usually includes a custom page template for the site’s home page and can additionally reference external features to add support for other types of site-specific elements such as custom lists, secondary pages, and Web Parts. The value of creating custom site definitions is obvious. They enable you to develop site templates for creating new sites that act as prepackaged business solutions.

Let’s now move on to a discussion of how site definitions are structured and deployed. Similar to a WSS feature, a site definition is defined with a set of Collaborative Application Markup Language (CAML)-based files that are deployed within a named directory on the file system of each front-end Web server in the farm. Site definitions are deployed within the 12\TEMPLATE\ SiteTemplates directory and are referenced in the 12\TEMPLATE\<culture>\XML directory in WEBTEMP.XML files, where the <culture> folder is the locale identifier (12\TEMPLATE\ 1033\XML for US English).

In a farm in which MOSS is installed, there are several pre-installed site definitions in addition to those normally included with WSS. MOSS uses these site definitions to provide site templates that add value on top of WSS by creating sites offering extended functionality in areas such as publishing, content search and management, business intelligence, and social networking. The fact that MOSS is so dependent on its own site definitions should provide you with a clear indication that developing custom site definitions is critical. This is what makes it possible to build real applications that are seen as complete business solutions on the WSS platform.

The Global site definition is located at the 12\TEMPLATES\GLOBAL path. It contains the standard default.master page template along with instructions to provision an instance of default.master page into the Master Page gallery of every new site. The Global site definition also contains provisioning logic to create the following four site collection–scoped lists in every new top-level site:

To create a simple site definition, create a new class library project. Similar to the feature projects introduced throughout this book, the Site Definition project is a class library project that is used for XML and ASPX editing and source control, whereas an install script is responsible for copying the files where they are needed for deployment. Later in this chapter, we will look at creating a WSS solution package for deployment that builds on this project format. We will also be localizing the site definition as it is built by using the Resources folder of the project.

At the top level of the project, create a RESOURCES folder and a TEMPLATE folder, which we will later deploy to the \\Program Files\Common Files\Microsoft Shared\web server extensions\12 folder, as was previously done with features. Next, create a folder structure as illustrated in Figure 9-1. 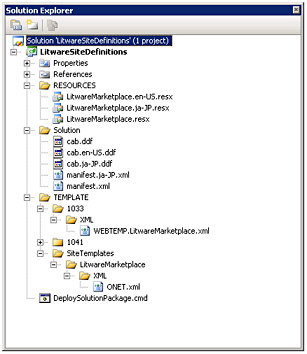 Inside the class library, create a SiteTemplates folder and a folder corresponding to your locale’s identifier, which is 1033 for US English. Within the SiteTemplates folder, create a folder with the same name as your site definition, which in this example is LitwareMarketplace. Within the LitwareMarketplace folder, create an XML folder with an XML file named ONET.xml. The final folder structure should look like Figure 9-1.

The ONET.xml file serves as the high-level manifest for the site definition and references the components that are to be used. Generally speaking, all components that you want to be automatically provisioned within sites created from the site definition should be referenced from this ONET.xml file. You also want to add references to WSS features that define list types that you want to be available to users so that they can create new lists on demand. Our approach is to create an empty XML file and paste in certain elements from the STS Team site definition, while defining the core of the elements ourselves.

The base structure of the ONET site definition schema is shown in Listing 9-1. Note that we define this XML file to use the SharePoint XML namespace, which gives us assistance with the schema when editing the file in Visual Studio. (The pre-installed site definitions do not reference this schema, although it is inferred.)

The NavBars node defines navigation bars used in the site. These are optional items, but they are necessary if you’re going to use the pre-installed SharePoint navigation bars. If you’d like to simply use the default navigation scheme in your site definition, copy the contents of this node from the STS site definition. If you are building custom navigation controls and want to bypass the SharePoint navigation user interface entirely, you can skip this node. Note that navigation bars included in this node also define the Quick Launch sidebar within the Team Site, which can also be accessed by code through the object model. To add a navigation element to the Quick Launch sidebar, add an additional NavBar element to the NavBars node. Following is an example QuickNav bar that you can add through CAML in the site definition. Note that the HTML within the Prefix, Body, and Suffix attributes is XML encoded. The name of the NavBar specifies the heading of the navigation section, and each NavBarLink node represents a hyperlink.

The DocumentTemplates node documents are used as document library default documents within the site. You typically reuse the content from the STS site definition for this node. To do so, simply copy and paste from the STS site definition to this node. Alternatively, you can provide your own document templates for each type of document. If you do not provide document templates, the site is still created, but the user is not able to create new documents by using the New button in Document Libraries.

The configuration references all modules, lists, and default data that are created on site creation. To define lists within the configuration, specify the feature GUID of the list. You may need to browse the Features directory to locate this, or simply refer to the pre-installed site definitions. For example, the following List nodes specify that the Litware Customer List and Litware Vendor List be created on site creation at the site-relative Lists/Vendors and Lists/Customers URLs.

You might wish to refer to the lists referenced within the STS Team site definition as well include instantiations of common lists, such as Announcements. You can override certain settings of the list, including the default data. To specify a default List Item, use the Data element of the list and include a Row element for each list item. You can use CAML data-defining or HTML-rendering XML within the list item, including dynamic tags such as <TodayISO/>, as long as the elements are escaped. The following code defines a default announcement that is created for the list instance that expires the same day it is created.

For features scoped to the site collection (Scope="Site"), you want to reference any custom features that are logically part of the site definition. The following code defines the basic Web Part feature that installs WSS Web Part entries in the site collection Web Part gallery and also the Team Collaboration feature that includes the basic WSS lists. Note that this feature does not create instances of the lists, but only enables their future creation on the site level.

Because WSS 2.0 did not provide support for features, modules could be included only in site definitions. Therefore, modules were added to site definitions anytime there was a requirement to provision an .aspx page or copy a .dwp file into the Web Part gallery. With the introduction of features in WSS 3.0, it doesn’t make sense to include the same number of modules inside a site definition. It’s better to maintain the majority of your modules inside features instead. However, there are still times when you should use a module inside a site definition, such as when you need to provision a page instance named default.aspx from a custom page template to provide the home page for a new site.

As you remember from Chapter 3, the File element within a Module element provides the flexibility to prepopulate Web Part instances within a Web Part page as part of the provisioning process. You can also specify an alternate location for module files either from another installed site definition or from a feature. The following module specifies the home page from the STS site definition and specifies which list view Web Parts should be instantiated on the page.

Alternatively, you could also specify a page deployed in any folder under the path \\Program Files\Common Files\Microsoft Shared\web server extensions\12. Note that the referenced file does not need to be part of a feature or site definition, although you might want to make it part of a packaged feature that is part of a WSS solution package. The following Module element specifies Page01.aspx from the CustomSitePages feature (see Chapter 3) to be instantiated as “default.aspx” within the site.

The DisplayCategory attribute allows you to add a custom configuration to one of the existing tabs already used by WSS, such as Collaboration or Meetings. MOSS adds two additional tabs of its own, Enterprise and Publishing. Assigning a unique value to the DisplayCategory attribute causes WSS to create a new tab to display your configuration to users, as with the Litware tab shown in Figure 9-2. 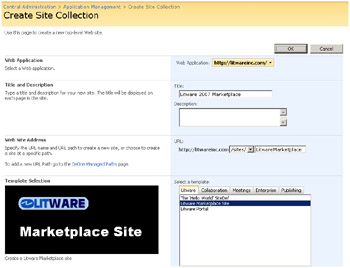 Figure 9-2: Configurations with a Hidden attribute value of false are shown to users as creatable site templates.

You can access the site definition project schema (localized ONET.xml file) for any WSS site for which you are an administrator by using the site-relative URL _vti_bin/ owssvr.dll?Cmd=GetProjSchema. When you access this URL, you are viewing a cached version of the parsed site definition, which contains the runtime values for the resource strings. You can also use this URL endpoint to access other CAML definitions, such as list schema, or to access list data. For more information, see the Software Development Kit (SDK) topic “Using the URL Protocol.”

WSS supports a component type known as a Site Provisioning Provider that can be configured to execute custom code during the site creation process. This makes it possible to add custom provisioning code to a site definition that complements CAML-based provisioning instructions by using the WSS object model to create site elements such as new pages, navigation menu items, and security groups. A Site Provisioning Provider can also be used to create portal-style sites that have a predefined hierarchy of child sites.

To create a Site Provisioning Provider, you must create a class that inherits from the SPWebProvisioningProvider class. This class must be compiled into an assembly DLL with a strong name and installed in the Global Assembly Cache (GAC) before it can be used. A site definition can reference a Site Provisioning Provider class from inside a configuration within the Web template file. The following example of the Web template file named WEBTEMP .LitwarePortal.xml is included in the sample code for this chapter within a Visual Studio project named LitwarePortal.

Another tricky aspect to writing a Site Provisioning Provider has to do with changing the security context before you begin to program against the new site using the WSS object model. After calling ApplyWebTemplate, you need to make a call to the RunWithElevatedPrivileges method to switch the code’s execution context so that it runs as the SHAREPOINT\system account. Chapter 10, “Application Security,” discusses the advanced security concepts involved with this example. At that point, we will cover the details associated with a call to RunWithElevatedPrivileges. For now, let us simply show you the code inside the Provision method of a Site Provisioning Provider that is written against the WSS object model to change the Title of the site and create two child sites below it.