When Loki Software, Inc. closed its doors a few years ago, the landscape of commercial gaming in Linux changed. Loki produced Linux ports of popular games, including Myth II and Civilization: Call to Power, to name a few. Today, commercial games that run natively are led by several popular games from id Software (described in the next section).

Although Loki Software, Inc. is gone, certain Loki Games are still available for purchase on the Web. Although they sell for a fraction of their original price, you are on your own if they don’t work since Loki Software is no longer there to support them. The Loki Games Demo is still around, if you want to get a feel for a particular Loki game before it disappears completely (I describe how to find demo and packaged Loki Games later in this chapter).

In the wake of Loki’s demise, TransGaming Technologies has been working on an approach to bringing popular games to Linux that relies on a version of WINE called Cedega. In most cases, instead of having different ports of popular games (as Loki did), Transgaming lets users run existing Windows games in Linux by adapting Cedega to each game that needs a tweak here and there.

While the state of Linux gaming has improved somewhat since the last edition of this book, Linux leaves much to be desired as a gaming platform. Linux has some of the technology needed to support advanced games, but the technology and developer support have not yet really come together.

Most serious gamers still maintain a Windows partition to support their gaming habits. According to top game developers, there are significant hurdles — both technological and economic — that hinder development of games for Linux. Issues with video and audio hardware, as well as problems with GNU/Linux development itself (in particular, glibc), have made new games difficult to produce. In addition, the relatively small size of the Linux gaming market means that incentives to overcome these issues are not particularly strong. However, these limitations are not overwhelming. As you’ll see later in this chapter, even the hardcore game nut can successfully use Linux.

Among the most popular games running natively in Linux are Quake III Arena, and Return to Castle Wolfenstein from id Software, Inc. You can purchase Linux versions of these games or download demos of each game before you buy.

Quake III Arena is a first-person shooter-type game where you can choose from lots of weapons (lightning guns, shotguns, grenade launchers, and so on) and pass through scenes with highly detailed 3D surfaces. You can play alone or against your friends. There are multiplayer death-match and capture-the-flag competitions. Standalone play allows you to advance through a tournament structure of skilled AI opponents. This version of the game lets you select a difficulty level, from fairly easy to downright impossible.

A demo version of Quake III Arena for Linux is available from the id Software Web site (find the demo link at www.idsoftware.com/games/quake/quake3-gold/ and look for the Linux demo). Figure 7-4 shows a screenshot from Quake III Arena. 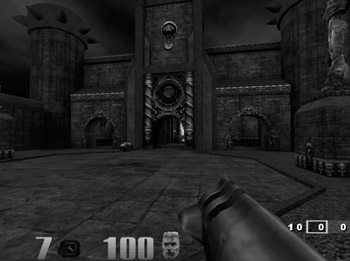 Mixing World War II action with creatures conjured up by Nazi scientists, you battle with the Allies to destroy the Third Reich. Return to Castle Wolfenstein is based on the Quake III Arena engine. The game offers single-player mode as well as team-based multiplayer mode.

If you purchase Return to Castle Wolfenstein for Linux, you actually get the Windows version with an extra Linux installer. If you already have the Windows version, you can download the Linux installer and follow some instructions to get it going. I downloaded the installer called wolf-linux-1.31.x86.run from www.idsoftware.com/games/wolfenstein/rtcw/index.php?game_section=updates. The INSTALL file (in /usr/local/games/wolfenstein) describes what files you need to copy from the Windows CD.

To get a demo of Return to Castle Wolfenstein, go to www.idsoftware.com/games/wolfenstein/rtcw/index.php?game_section=overview. Both a single-player and a multiplayer demo are available.

Figure 7-5 is a screenshot from Return to Castle Wolfenstein running in Linux. 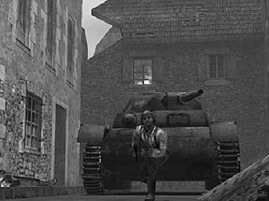 TransGaming Technologies (www.transgaming.com) brings to Linux some of the most popular games that currently run on the Windows platforms. Working with WINE developers, TransGaming is developing Cedega, which enables you to run many different games on Linux that were originally developed for Windows. Although TransGaming is producing a few games that are packaged separately and tuned for Linux, in most cases it sells you a subscription service to Cedega instead of the games. That subscription service lets you stay upto-date on the continuing development of Cedega so you can run more and more Windows games.

To get Windows games to run in Linux, Cedega particularly needs to develop Microsoft DirectX features that are required by many of today’s games. There are also issues relating to CD keys and hooks into the Windows operating system that must be overcome (such as requiring Microsoft Active Desktop). In fact, a Cedega subscription has value, in part, because it lets you vote on which games you’d like to see TransGaming work on next.

A full list of games supported by TransGaming, as well as indications of how popular they are and how well they work, is available from the TransGaming site (search for the games that interest you by going to www.transgaming.com and clicking on Games). More than 100 games are currently listed with a rating of 4 out of 5 (meaning that the game will run well, if not flawlessly). Seven games are rated a 5 (meaning that they run flawlessly).

Support for new games and enhancements for Cedega 4.1 are covered in the release notes: http://downloads.transgaming.com/files/cedega-4.1_releasenotes.txt. Here is a list of some of new and popular games that are being used by the TransGaming community and that are said to run well in Cedega (rated a 4 or 5). I suggest you check the TransGaming list yourself for additions and changes:

The TransGaming website is not the only place to find information about which games work well under Cedega 4.0.1. Extreme Tech (www.extremetech.com) found the following games also work well in Fedora when using Cedega 4.0.1;

If you have a particular game in mind, search for the game title with the Cedega keyword to get started looking for a viable configuration. Even if there is no official support, there are numerous users passionate about particular titles that have developed workarounds and patches for particular games.

With Cedega 4.0.1, TransGaming added several new Point2Play features. Point2Play provides a graphical window for installing, configuring, and testing Cedega on your computer. It also lets you install and organize your games so you can launch them graphically. Figure 7-6 shows an example of the TransGaming Point2Play window: 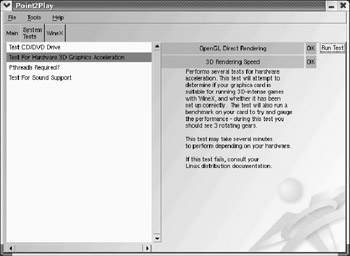 Figure 7-6: Use the Point2Play window to check computer hardware for Cedega gaming.

Other features in the new Point2Play window include the ability to select among different installed versions of Cedega for running applications and tools for individually configuring how each game runs under Cedega. (If a game won’t run from the GUI, try launching it from a Terminal window.

To get binary copies (ones that are already compiled to run) of Cedega and Point2Play, you need to subscribe to TransGaming. For details on how to become a “TransGamer,” click on the Subscribe Here link on the TransGaming home page (www.transgaming.com). Benefits currently include:

Cedega used to be known as WineX. The source code for WineX may become available in the near future if you want to build your own WineX/Cedega package. To check availability, try the SourceForge.net project site for WineX (sourceforge.net/projects/winex).

To encourage people to get to know its games, Loki offered a demo program that let you choose from among more than a dozen Loki games to download and try. Loki also offered boxed sets of its commercial games for purchase. Although Loki Software, Inc. is no longer in business, you can still find some of its games for sale. For example, a recent search for Loki at Amazon.com turned up 16 different Loki games (including the ones described here), with many selling for $9.99.

The Loki Demo Launcher for downloading demos is still available from the Demo Launcher page (www.lokigames.com/products/demos.php3). From that page, there are links to FTP sites from which you can download the Demo Launcher. The file that you want to save is loki_demos-full-1.0e-x86.run. Save it to a directory (such as /tmp/loki) and do the following:

The following sections describe a few games that may still be available. Again, these games may not be available for long.

You can build online civilizations with Civilization: Call to Power (CCP). Like earlier versions and public spin-offs (such as the Freeciv described earlier in this chapter), Civilization: Call to Power for Linux lets you explore the world, build cities, and manage your empire. This latest version offers multiplayer network competition and extensions that let you extend cities into outer space and under the sea.

If you like Freeciv, you will love CCP. Engaging game play is improved with enhanced graphics, sound, and animation. English, French, German, Italian, and Spanish versions are available.

The CCP demo comes with an excellent tutorial to start you out. If you have never played a civilization game before, the tutorial is a great way to start. Figure 7-7 shows an example of a scene from the Civilization: Call to Power for Linux demo.

If you like knights and dwarves and storming castles, Myth II: Soulblighter for Linux might be for you. In Myth II, you are given a mission and some troops with various skills. From there, you need strategy and the desire to shed lots of virtual blood to meet your goal.

Myth II was created by Bungie Software (www.bungie.com) and ported to Linux by Loki Entertainment Software (www.lokigames.com). This version of the popular Myth game includes improved graphics and new scenarios.

A demo version is available that runs well in Fedora. You can get it via the Demo Launcher described earlier. As usual, you will need a fairly powerful computer (at least a Pentium 133 MHz, 32MB RAM, 80MB swap space, and 100MB of free disk space). You need network hardware for multiuser network play (network card or dialup) and a sound card if you want audio. A screenshot of Myth II is shown in Figure 7-8. 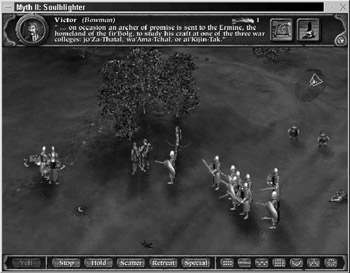 Figure 7-8: Use warriors, archers, and dwarves to battle in Myth II.

Based on the Quake Engine, Heretic II sets you on a path to rid the world of a deadly, magical plague. As the main character, Corvus, you explore dungeons, swamps, and cities to uncover and stop the plague. The graphics are rich and the game play is quite engaging.

You will experience some crashing problems with Heretic II out-of-the-box. Be sure to check for the update to Heretic II at updates.lokigames.com, which should fix most of the problems.

BioWare (www.bioware.com) dipped its foot into Linux gaming waters with a Linux client for its wildly popular Neverwinter Nights game. Neverwinter Nights is a classic role-playing game in the swords-and-sorcery mold. You can develop your character and go adventuring, or play online with others via a LAN or over the Internet. You can even build your own worlds and host adventures as the Dungeon Master. Neverwinter Nights is licensed by Wizards of the Coast to use Dungeons & Dragons rules and material.

In order to use the Neverwinter Nights Linux client, you must purchase the game itself from BioWare. You must also have access to certain files from a Windows installation of the game. If you or a friend have the Windows version already, you can grab the files from that version. Otherwise, you’ll find them online in a number of locations. See the installation instructions at http://nwn.bioware.com for links.