Working with the Linux File System

The Linux file system is the structure in which all the information on your computer is stored. Files are organized within a hierarchy of directories. Each directory can contain files, as well as other directories.

If you were to map out the files and directories in Fedora, it would look like an upside-down tree. At the top is the root directory, which is represented by a single slash (/). Below that is a set of common directories in the Linux system, such as bin, dev, home, lib, and tmp, to name a few. Each of those directories, as well as directories added to the root, can contain subdirectories.

Figure 4-1 illustrates how the Linux file system is organized as a hierarchy. To illustrate how directories are connected, Figure 4-1 shows a /home directory that contains subdirectories for three users: chris, mary, and tom. Within the chris directory are subdirectories: briefs, memos, and personal. To refer to a file called inventory in the chris/memos directory, you could type the full path of /home/chris/memos/inventory. If your current directory were /home/chris/memos, you could refer to the file as simply inventory. 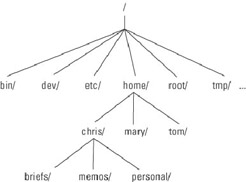 Figure 4-1: The Linux file system is organized as a hierarchy of directories.

Some of the Linux directories that may interest you include the following:

The file systems in the DOS or Microsoft Windows operating systems differ from Linux’s file structure. See the sidebar on the Linux file system versus Windows-based file systems.

Although similar in many ways, the Linux file system has some striking differences from file systems used in MS-DOS and Windows operating systems. Here are a few:

As a Fedora user, most of the files you save and work with will probably be in your home directory. Here are commands you use to create and use files and directories:

The following procedure steps you through creating directories within your home directory, moving among your directories, and setting appropriate file permissions:

When you need to identify your home directory on a shell command line, you can use the following:

You can also use the tilde to identify someone else’s home directory. For example, ~chris would be expanded to the chris home directory (probably /home/chris).

Other special ways of identifying directories in the shell include the following:

To make more efficient use of your shell, the bash shell lets you use certain special characters, referred to as metacharacters and operators. Metacharacters can help you match one or more files without typing each filename completely. Operators let you direct information from one command or file to another command or file.

To save you some keystrokes and to be able to refer easily to a group of files, the bash shell lets you use metacharacters. Anytime you need to refer to a file or directory, such as to list it, open it, or remove it, you can use metacharacters to match the files you want. Here are some useful metacharacters for matching filenames:

To try out some of these file-matching metacharacters, go to an empty directory (such as the test directory described in the previous section) and create some files. Here’s an example of how to create some empty files:

The next few commands show you how to use shell metacharacters to match filenames so they can be used as arguments to the ls command. Using the metacharacters shown below, you can match the filenames you just created with the touch command. Type the following commands and see if you get the same responses:

Here are a few examples of pattern matching with the question mark (?):

Here are a few examples of using brackets to do pattern matching:

In the first example, any file beginning with a, b, or w is matched. In the second, any file that begins with a, g, or w and also ends with either n or e is matched. You can also include ranges within brackets. For example:

Here, any file names beginning with a letter from a through g is matched.

Here are some examples of command lines where information is directed to and from files:

In the first example, the contents of the .bashrc file in the home directory are sent in a mail message to the computer’s root user. The second command line formats the chmod man page (using the man command), removes extra back spaces (col -b) and sends the output to the file /tmp/chmod (erasing the previous /tmp/chmod file, if it exists). The final command results in the following text being added to the user’s project file:

After you’ve worked with Linux for a while, you are almost sure to get a Permission denied message. Permissions associated with files and directories in Linux were designed to keep users from accessing other users’ private files and to protect important system files.

The nine bits assigned to each file for permissions define the access that you and others have to your file. Permission bits appear as rwxrwxrwx. The first three bits apply to the owner’s permission, the next three apply to the group assigned to the file, and the last three apply to all others. The r stands for read, the w stands for write, and the x stands for execute permissions. If a dash appears instead of the letter, it means that permission is turned off for that associated read, write, or execute.

The first line shows a file (ch3) that has read and write permission for the owner and the group. All other users have read permission, which means they can view the file but cannot change its contents (although a user may be allowed to remove the file, since the ability to remove a file is based on directory permissions). The second line shows a directory (indicated by the letter d before the permission bits). The owner has read, write, and execute permission, while the group and other users have only read and execute permissions. As a result, only the owner can add, change, or delete files in that directory. Any other user, however, can only read the contents, change to that directory, and list the contents of the directory.

If you own a file, you can change the permission on it as you please. You can do this with the chmod command. For each of the three sets of permission on a file (read, write, and execute), r is assigned to the number 4, w to 2, and x to 1. So to make permissions wide open for yourself as owner, you would set the first number to 7 (4 plus 2 plus 1). The same would be true for group and other permission. Any combination of permissions can result from 0 (no permission) through 7 (full permission).

Here are some examples of how to change permission on a file and what the resulting permission would be:

You can also turn file permissions on and off using plus (+) and minus (-) signs, respectively. This can be done for the owner user (u), owner group (g), others (o), and all users (a). For example, each time starting with a file that has all permissions open (rwxrwxrwx), here are some chmod examples with resulting permissions after using a minus sign:

Likewise, here are some examples, starting with all permissions closed (---------) where the plus sign is used with chmod to turn permissions on: