During system startup, a series of scripts are run to start the services that you need. These include scripts to start network interfaces, mount directories, and monitor your system. Most of these scripts are run from subdirectories of /etc/rc.d. The program that starts most of these services up when you boot and stops them when you shut down is the /etc/rc.d/rc script. The following sections describe run-level scripts and what you can do with them.

In Fedora, most of the services that are provided to users and computers on the network are started from run-level scripts.

A software package that has a service to start at boot time (or when the system changes run levels) can add a script to the /etc/init.d directory. That script can then be linked to an appropriate run-level directory and either be started or stopped (to start or stop the service).

Table 12-5 lists many of the typical run-level scripts that are found in /etc/init.d and explains their function. Depending on the Fedora software packages you installed on your system, you may have dozens more run-level scripts than you see here. (Later, I describe how these files are linked into particular run-level directories.)

The two digits following the K or S in the filename provide a mechanism to select the priority in which the programs are run. For example, S12syslog is run before S90crond. However, while humans can readily see that 85 is less than 110, the file S110my_daemon is run before S85gpm. This is because the ASCII collating sequence orders the files, which simply means that one positional character is compared to another. Therefore, a script beginning with the characters S110 is executed between S10network and S15netfs in run level 3.

Understanding what startup scripts do

Despite all the complicated rcXs, Ss, and Ks, the form of each startup script is really quite simple. Because they are in plain text, you can just open one with a text editor to take a look at what it does. For the most part, a run-level script can be run with a start option, a stop option, and possibly a restart option. For example, the following lines are part of the contents of the smb script that defines what happens when the script is run with different options to start or stop the Samba file and print service:

To illustrate the essence of what this script does, I skipped some of the beginning and end of the script (where it checked if the network was up and running and set some values). Here are the actions smb takes when it is run with start or stop:

The restart option runs the script with a stop option followed by a start option. If you want to start the smb service yourself, type the following command (as root user):

To stop the service, type the following command:

The smb run-level script is different from other run-level scripts in that it supports several other options than start and stop. For example, this script has options (not shown in the example) that allow you to reload the smb.conf configuration file (reload) and check the status of the service (rhstatus).

Modifying the startup behavior of any such script merely involves opening the file in a text editor. For example, the atd daemon queues jobs submitted from the at and batch commands. Jobs submitted via batch are executed only if the system load is below a particular value, which can be set with a command-line option to the atd command. The default value of 0.8 is based on the assumption that a single-processor machine with less than 80 percent CPU utilization could handle the additional load of the batch job. However, if you were to add another CPU to your machine, the default threshold value would be too low and the batch jobs would be excessively restricted.

You can change the system load threshold value from 0.8 to 1.6 to accommodate the increased processing capacity. To do this, simply modify the following line (in the start section) of the /etc/init.d/atd script:

Replace it with this line, using the -l argument to specify the new minimum system load value:

After saving the file and exiting the editor, you can reboot the machine or just run any of the following three commands to begin using the new batch threshold value:

If you are uncomfortable editing startup scripts and you simply want to add options to the daemon process run by the script, there may be a way of entering these changes without editing the startup script directly. Check the /etc/sysconfig directory and see if there is a file by the same name as the script you want to modify. If there is, that file probably provides values that you can set to pass options to the startup script. Sysconfig files exist for apmd, arpwatch, dhcpd, kudzu, ntpd, samba, squid, and others.

There are several ways to deal with removing programs from the system startup directories, adding them to particular run levels, or changing when they are executed. From a Terminal window, you can use the chkconfig command. From a GUI, use the Service Configuration window.

To reorganize or remove run-level scripts from the GUI, use the Service Configuration window. Either select System Settings ® Server Settings ® Services or log in as root user

and type the following command in a Terminal window:

Figure 12-1 shows an example of the Service Configuration window. 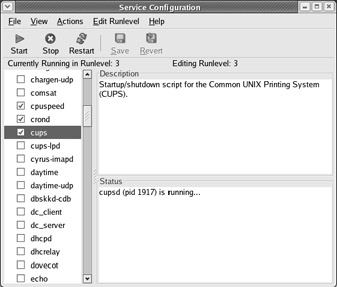 The Service Configuration window lets you reconfigure services for runlevels 3, 4, and 5.The run levels that you are currently running and currently editing are displayed near the top of the screen. Services that are available for the run level appear in the middle of the frame, with check marks next to the ones configured to start at that level. Here is what you can do from this window:

You can then page through the list to see those services. If you want to view the status of an individual service, you can add the service at the end of the list option. For example, to see whether the nfs service starts in each run level, type the following:

Another tool that can be run from the shell to change which services start and do not start at various levels is the ntsysv command. Type the following as root user from the shell:

A screen appears with a list of available services. Use the up and down arrow keys to locate the service you want. With the cursor on a service, press the Spacebar to toggle the service on or off. Press the Tab key to highlight the OK button, and press the Spacebar to save the change and exit. The ntsysv tool is somewhat clever; it checks your default run level (the initdefault set in the /etc/inittab file) and turns on the service so it starts at that run level.

Suppose you want to create and configure your own run-level script. For example, after installing the binaries for the fictitious my_daemon program, it needs to be configured to start up in runlevels 3, 4, and 5, and terminated in any other run level. You can add the script to the /etc/init.d directory, then use the chkconfig command to configure it.

To use chkconfig, ensure that the following lines are included in the /etc/init.d/my_daemon script:

With those lines in place, simply run the following command:

Appropriate links are created automatically. This can be verified with the following command:

The script names that are created by chkconfig to make this all work are:

There are a bunch of services, particularly Internet services, that are not handled by separate run-level scripts. Instead, a single run-level script called xinetd (formerly inetd) is run to handle incoming requests for these services. For that reason, xinetd is sometimes referred to as the super-server. The xinetd run-level script (along with the xinetd daemon that it runs) offers the following advantages:

When a request comes into your computer for a service that xinetd is monitoring, xinetd uses the /etc/xinetd.conf file to read configuration files contained in the /etc/xinetd.d directory. Then, based on the contents of the xinetd.d file for the requested service, a server program is launched to handle the service request (provided that the service is not disabled).

The following are a few examples of services that are monitored by xinetd. The daemon process that is started up to handle each service is also listed.

Other services that can be launched by requests that come to xinetd include services for remote telnet requests, Samba configuration requests (swat), and Amanda network backups. A short description of each service is included in its /etc/xinetd.d file.

Aside from the run level chosen at boot time (usually 3 or 5) and the shutdown or reboot levels (0 and 6, respectively), you can change the run level at any time while you’re logged in (as root user). The telinit command (really just a symbolic link to init) enables you to specify a desired run level, causing the termination of all system processes that shouldn’t exist in that run level, and starting all processes that should be running.

For example, if you encountered a problem with your hard disk on startup, you may be placed in single-user mode (runlevel 1) to perform system maintenance. After the machine is stable, you can execute the command as follows:

The init command handles terminating and starting all processes necessary to present you with a graphical login window.

You can determine the machine’s current run level with the aptly named runlevel command. Using the previous example of booting into single-user mode and then manually changing the run level, the output of the runlevel command would be:

Changing to a shutdown run level