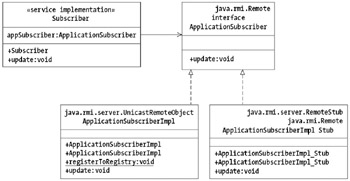 As mentioned in the "Understanding the Structure of the Connector Pattern" section, the class diagram does not belie the nature of the deployment or some of the details inherent in actual implementation. In this case, the subscriber service implementation that resides in the Web tier uses an instance of the ApplicationSubscriberImpl_Stub instance to communicate with the ApplicationSubscriberImpl instance that resides in the application's process, as shown in Figure 13-7.

Figure 13-7: Event forwarding through the physical tiers by the connector

Defining the Interface to the Implementation Side

There should be nothing too interesting in the interface. To implement the class as a remote object, the class extends java.rmi.Remote and the methods in the class throw the java.rmi.RemoteException exception.

The class for the application subscriber implements the interface in Listing 13-1 and extends the java.rmi.server.UnicastRemoteObject class. This class extension makes your object remoteable and gives it the ability to be registered with the naming service from RMI and subsequently receive method calls from outside of the process.

The class is a part of a larger Swing-based application. Its responsibilities include the following:

To fulfill the second responsibility, the application passes a reference to the JTextArea graphic component on the constructor that this class instance uses to post messages for the user. Listing 13-2 illustrates the application-side subscriber that serves as the implementation class.

The service implementation (the subscriber that serves as the Web Service) calls the update method on this class. This class, in turn , writes the data from the event to the application's text area by simply appending the event data to the text area. In reality, you would have a more user-centric mechanism for notifying the user of an important event that needs their attention.

J2SE comes with an RMI compiler, rmic , that handles the details of building the application-side implementation stub generation. The stub is subsequently instantiated into the same process that runs the service implementation; thus, the interface must at least be in the class path for the Apache Axis engine.

Your build process ”in this case, the Apache Ant build process that comes with the source code for the book ”automatically builds the stubs when the code is recompiled.

This section enhances the subscriber from the event service built in the Publish/Subscribe pattern to forward messages to the application with an interest in the events published by the event service. The difference in the implementation code from the previous chapter occurs in the update method, shown in Listing 13-3. You no longer print information to the System.out stream in the body of the update method. Instead, you retrieve a proxy to the implementation, through RMI's Naming service, and call methods against the proxy.

Listing 13-3 retrieves the proxy from RMI's Naming every time Apache Axis calls the update method. This allows the application to start and stop at will without impacting the Web Service. The Web Service continues to receive events from the remote event service when the user application is not available, but it stops delivering events to the user application. One of the nice attributes of splitting the logic and Web tiers in terms of the process that contains them is the additional ability to leverage code and classes independently of the containers. For example, users can continue to use applications when the Web Service environment is not available.

Seeing the Event Service in Action with the New Subscriber

Putting the new subscriber Web Service into action requires several steps worth noting. The steps described here do not necessarily have to occur in the order described; however, exceptions to the step order accompany the description:

Listing 13-4 contains a method run by the stand-alone application to register its subscriber to RMI's Naming component. The application uses this code as described in step 2 after initialization of the user interface but before clients can interact with the application.

The client creates the application subscriber and registers it with the code shown in Listing 13-5. The ivTextArea instance variable refers to a JTextArea graphical component created earlier in the application.

Listing 13-5: Creating the Application-Side Subscriber and Registering the Subscriber