Finland as a Mobile Business Pioneer

The Finnish telecom industry dates back to 19th century, when the first telecom networks were built in the country, initiated by the Russian Czar and the Finnish autonomous government. Until the 1980s, because of limited capital resources available in the country, local telecom companies and cooperatives dominated the Finnish telecommunications markets. Yet, the nearly 300 local telephone companies had talented personnel, and Finland's telecom industry, led by the national monopoly company Telecom Finland, [1] gradually developed one of the most sophisticated networks in Western Europe. Liberalization and digitization of the telecom network, strongly initiated and steered by the Finnish government, boosted the sophistication of the networks.

By the end of the 20th century, Finland became one of the leading countries in mobile communications. Nearly 78% of Finns had a mobile phone in 2001, and the market neared the point of saturation (Lepp vuori, 2002). Among certain segments, e.g., teenagers and the business community, the penetration was nearly 100%. Public telephones have become obsolete, as nearly every-one has a personal portable phone. People moving into an apartment or a house often forego a fixed connection and subscribe only to the mobile network. The traditional fixed phone line is used mainly for high-speed Internet connections rather than for voice communications. [2]

The telecommunications sector also forms an essential part of the Finnish ICT-cluster. [3] Presented in Figure 1 is the structure of the various converging industries, ranging from media to traditional telecommunications. Digital service companies constitute the core of the cluster. Digitization of information had dramatic impacts on end users and ICT companies. Digitization allowed ICT firms to start producing and offering innovative services that were totally new to end users, increased the geographical reach of existing digital and offline services, and offered cost-cutting opportunities for organizations adopting new digital technologies. Finnish companies are also actively building the digital communications infrastructure and developing new services. 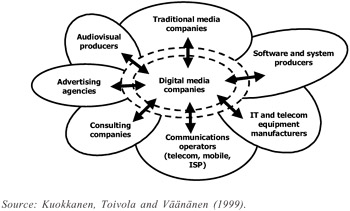 In 1999, the total turnover of the Finnish ICT cluster was estimated to be 34 billion euros (nearly 25% of Finnish GDP), and the ICT-related activities employed around 146,000 people (about 6% of the total workforce) (Table 2).

In recent years, mobile telecommunications has been one of the most rapidly developing sectors within ICT. Finnish companies as well as users have been very open to modern technology, and Finland has become an interesting lead market for mobile development. By 2000, several venture capitalists began investing in Finnish start-up companies to explore and learn about possibilities in the mobile markets. In the next section, we look in detail at the structure of the Finnish mobile telecom markets.

[1]In its early years, like most other telecom firms worldwide, Telecom Finland (TF) operated as a division of the Finnish national post office. TF changed its name to Sonera in 1997. Now, Sonera and Sweden's Telia merged.

[2]The U.S.-based author of this chapter had an interesting experience in Helsinki in 2000. From his apartment in Helsinki, the author called the mobile phone of a Nokia executive. The Nokia executive said: "I was surprised to get this call. I hardly ever get a call from a fixed line!"