Once you have a directory in place authenticating users, you may want to use it for user authentication on UNIX too. And, indeed, there is a standard Posix account object holding all information required for an account on the UNIX operating system. The standard is defined in RFC 2307, "An Approach for Using LDAP as a Network Information Service." As the title implies, LDAP gives you much more than user information. LDAP can also substitute for the whole NIS/NIS+ or DNS framework. In this section, however, we will concentrate on user accounts. 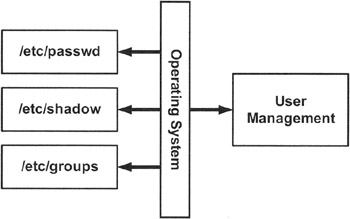 As stated previously, most UNIX system vendors offer this layer of software. Let us briefly review how it works. Exhibit 19 shows the situation. What we want to achieve is what we called, in an abstract way, "user management" via system calls connected to a service. In Exhibit 20, this service is called PAM (pluggable authentication modules), which contacts an LDAP server over TCP/IP. This LDAP server provides authentication.

Now we know nearly all of the pieces depicted in Exhibit 19. The only unknown is the PAM layer providing the switch in user authentication. This PAM layer is a standard layer documented by the Open-Group. If you are interested in the original documentation, you can have a look at http://www.opengroup.org/tech/rfc/rfc86.0.html. PAM has been developed by Sun Microsystems, and the PAM layer later became a standard.

You can obtain software and documentation from http://www.padl.com. (Note that the name of the enterprise is LDAP backwards, read from left to right.)