The WBS is the basis of all project schedules because it decomposes the project into the required tasks and allows the team to estimate each task's duration. The PDM provides a network showing the earliest and latest start and end times for each task and for the entire project. With that information at hand, Gantt charts can be prepared, graphically showing task, phase, and project schedules.

Henry L. Gantt, a pioneer in scientific management, developed the Gantt chart around 1917. It is a bar chart that shows planned and actual progress for a number of tasks displayed against a horizontal time scale. This type of information display is still one of the most effective and useful tools of project management. In addition to its use as a tracking tool for actual against planned progress, it is a very effective communications tool because it can portray a lot of data quickly to the interested parties. Exhibit 2-10 shows a sample of a Gantt chart using the WBS information from Exhibit 2-6. Although it was constructed with Microsoft Project, all other project packages produce similar schedules. 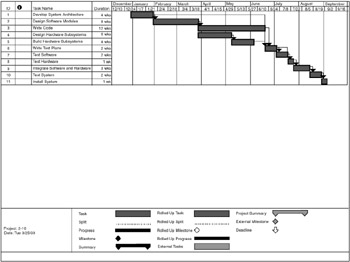