WBS is the most important project management tool. With a good WBS, the project manager can develop every other tool needed to successfully manage the project. When done correctly, it is the basis for planning, scheduling, budgeting, and controlling the project.

What Is a Work Breakdown Structure?

A WBS is a structured way of decomposing a project into its various components—software, hardware, communications network, services, documentation, labor, testing, implementation, installation, and maintenance. In short, WBS is a formalized way of reducing the project into successively lower levels of greater detail.

There are two ways to represent a WBS. The first and most popular form is called the indented format. The indented format derives its name from the practice of indenting each successively lower level, as shown in Exhibit 2-3. 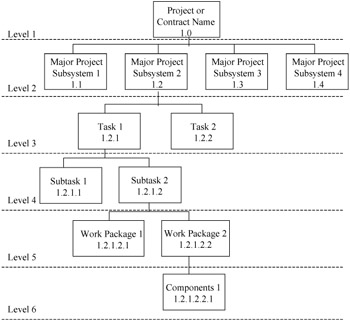 WBS levels refer to the successively lower tiers of detail beginning with the project name as the first level. Usually, a WBS is developed to the third or fourth level but rarely needs to be developed below the fifth level. There are two key points in WBS development. First, the level of development has nothing to do with the type of project, the industry, or the customer—private or public. It has to do with the complexity of the project. A WBS to the third level can easily describe a simple project of a few tasks. But a project such as building a house, hospital, or airplane requires a detailed WBS to at least the fifth level.

Each of the WBS levels are described as follows:

A sample WBS is presented in Exhibit 2-5. Several key points about this example should be noted. First, the name of the project is at the first level. Second, not every major subsystem or subproject is decomposed to the same level. It is only necessary to decompose the elements of the WBS to the level at which it is possible to assign individuals, a budget, and a schedule to the task. Each project manager will have a different view of the required level of WBS decomposition. My level of comfort, relative to managing the project, might require that I decompose all the WBS elements to the fourth level, while you may be comfortable operating at the third level. The third thing to note about the sample WBS is that the lowest levels—that is, work packages—are described by a verb, while nouns describe higher levels. This rule of thumb is helpful in developing a WBS—when the element can be introduced by a verb; for example, develop, build, write, document. Then it probably is a work package and need not be decomposed to a lower level.

The primary objective in developing a WBS is to ensure that every project task is identified. It is not an objective to determine or record the interdependencies of the tasks at this point. In fact, it is better not to think in terms of task dependencies until all tasks are identified. Concentrate on identifying all the tasks first, because if it is not in the WBS, it is not in the project. The network is the tool used to show task relationships.