The purpose of this section is to:

Some experimental responses cannot be measured on a continuous scale although they can be divided into sequential classes. Examples include appearance and performance ratings. In these situations, three to five rating classes are generally the optimum number because this number allows major differences in the responses to be identified and yet does not require the rater to identify differences that are too subtle. Two related techniques are used to analyze classified responses:

It is assumed that the user will use a computer program to analyze the classified data. The specific input format will depend on the computer program used. The mathematical derivations and philosophies of this approach will not be presented here. For more information see Volume V of this series as well as Taguchi (1987) and Wu and Moore (1985).

Three grades are used to evaluate paint appearance of a product. They are "Bad," "OK," and "Good." Seven factors (A through G), each at two levels, are evaluated to determine the combination of factor levels that optimizes paint appearance. Five products are evaluated at each testing situation in an L8 orthogonal array. Test results are shown in Table 9.34.

The ANOVA analysis for this set of data is shown in Table 9.35. Note that the degrees of freedom are calculated differently from the non-classified situation. The df of each source is:

The error df is the total df minus the df of each of the factors.

From the ANOVA table, factors A, B, and F are identified as significant. The effects of these factors are shown in Table 9.36 and Figure 9.21. 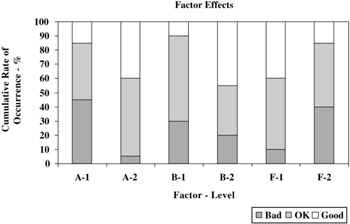 Although interpretation and use of the ANOVA table in classified attribute analysis is the same as for the non-classified situation, a significant difference does exist in estimating the cumulative rate of occurrence for each class under the optimum condition.

Using this transformation, the estimated cumulative rate of occurrence for each class at the optimum condition (A 2 B 2 F 1 ) is calculated as follows:

The estimated cumulative rate of occurrence for each class for the optimum condition is:

These results are summarized in Table 9.37.

Classified variable analysis is used when the number of items evaluated is not the same for all test matrix setups. As with classified attribute analysis, the computer analyzes the cumulative frequencies.

Four factors (A, B, C and D) are suspected of influencing door closing efforts for a particular car model. An experiment was set up that evaluated each of these factors at three levels. An L9 orthogonal array was used to evaluate the factor levels. Door closing effort ratings were made by a group of typical customers. Each customer was asked to evaluate the doors on a scale of one to three as follows: 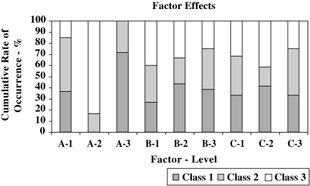 From the ANOVA table, factors A, B and C are identified as significant. The effects of these factors are shown in Table 9.40.

The choice of the optimum levels is clear for factors A and B. A 2 and B 1 are the best choices. Two different choices are possible for factor C, depending on the overall goal of the design. If the goal is to minimize the occurrence of unacceptable efforts, C 1 is the best choice. If the goal is to maximize the number of customer ratings of "very good," then C 2 is the best choice. For this example, C 1 will be chosen as the preferred factor setting. The estimated rate of occurrence for each class for the optimum setting, A 2 B 1 C 1 , can be calculated using the omega method. The estimated rates are shown in Table 9.41. The df for the factors are calculated in the same way as with the Classified Attribute Analysis, i.e., df = (the number of levels of that factor - 1) * (the number of classes - 1).

The error df is the total df minus the df of each of the factors.

DISCUSSION OF THE DEGREES OF FREEDOM

In both classified attribute analysis and classified variable analysis, the total degrees of freedom are much greater than the number of items evaluated. The interpretation of the F ratios and the calculation of a confidence interval are complicated by the large number of degrees of freedom and will not be addressed here. The analysis techniques for classified responses are not as completely developed as are the techniques for the analysis of continuous data. In Dr. Taguchi's approach, the emphasis is on using the percent contribution to prioritize alternative choices. Although better statistical techniques may be developed to handle classified data, classified attribute and classified variable analyses can be used to identify the large contributors to variation in classified responses.

As we just mentioned in the discussion of the degrees of freedom, there is no consensus among statisticians regarding the best method to use to analyze classified data. A method that is an alternate to the ones described in this section is to transform the classified data into variable data and analyze the data as described in Section 5. A drawback to this approach is that the relative difference in the transformed values should reflect the relative difference in the classifications, and this is sometimes difficult to achieve. A simple example from the medical field will illustrate this. Four different groups of patients suffering from the same disease are each given a different medicine. The purpose is to determine which medicine is best. The response classes are shown in below:

Dr. George Box is of the opinion that this difficulty can be overcome by analyzing the variable data using several different transformations from the classifications. In most instances, the choice of the best response will not be affected by the different relative values placed on the classifications and, in every case, the data will be much easier to analyze and interpret. The example given earlier dealing with classified attribute data will be worked as an example.

Three grades are used to evaluate paint appearance of a product. They are "Bad," "OK," and "Good." The classified data are transformed into variable data as follows: Bad = 1; OK = 3; Good = 4. This puts emphasis on avoiding situations that result in "bad" responses. Seven factors (A through G), each at two levels, are evaluated to determine the combination of factor levels that optimizes paint appearance. Five products are evaluated at each testing situation in an L8 orthogonal array. Test results are shown in Table 9.42. The ANOVA analysis for the raw data is shown in Table 9.43. Plotting of the data and inspection of the level averages reveal that the best factor choices are: A 2 B 2 F 1 . The ANOVA analysis for the NTB S/N ratios is shown in Table 9.44.

Each of the methods has one further disadvantage . Using the transformation approach, it is not possible to make a projection of what the distribution of classes would look like at the optimum settings. The accumulation analysis was not able to identify the effect on the standard deviation of the ratings due to factor E. Each approach tells a different part of the story and both should be used to get the full picture.