Figure 15-1 illustrates the basic components of a typical switch operating system, the foundation of which is the core-level, or kernel-level system calls that provide basic system-level functions, such as interrupt processing, memory management, and task prioritization. The ability to execute Fibre Channel commands through low-level system calls to the FC chip-set is the specialization encapsulated in the switch, given that microkernel performance of the switchs operating system is paramount to the successful operation and effective utilization of switch hardware. 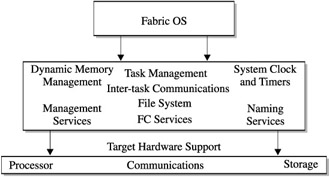 Figure 15-1: The basic components of the switchs operating system

There are two major issues that impact the operation and performance of the switchs OS. The first is the extensibility of the systems functions to successfully execute existing functionality while being able to encompass new levels of applications which have become increasingly important to the operation of the SAN as a whole. Surrounding this level of compatibility and scalability is the microkernels capability to coexist alongside a commodity-level chip and Fibre Channel microprocessor. Consideration must be given to the addressability of the operating environment and its ability to multiprocess and multitask the network linking functions of the switch. The second issue is the operating systems capability to provide reliable yet efficient Name Service functions for intraswitch operations and interswitch communications. The inherent danger in mixing and matching different vendors switch components should be duly noted, and strongly heeded. 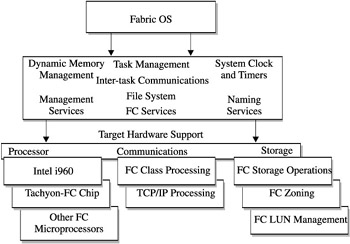 The following list discusses the additional components that process under the control of the fabric operating system. The specific processes will be implemented differently depending on the vendor selection of FC switch products; however, the common functions as explained here should be included to achieve a complete operational SAN fabric.

Taking all of this into consideration, it becomes plain that the concurrency of port-to-port communication, outside communications, switch-to-switch communications, and the latency factors for the microkernel can, and will, quickly become overwhelming.