As advancements were being made in SMP and MPP architectures, storage technologies remained tightly coupled with their computer counterparts. They continued to lag behind processing advancements and followed an I/O execution model of direct attachment to the server regardless of whether it was connected to SMP configurations or MPP processing nodes. However, some advancement was made with shared I/O as evidenced in particular MPP configurations. Sometimes considered the predecessor to the SAN, the 'shared nothing' model can be viewed as a logical extension to the MPP parallel environments. (Additional discussions of the SMP and MPP models of processing and I/O systems can be found in Part II.)

The processing advancements driven by SMP and MPP technologies began to set the foundation for advanced storage architectures. Storage provided the focal point to integrate several innovations such as an enhanced I/O channel protocol, a high-speed interconnection, and 'shared nothing' architecture to support the ever increasing need for data access resulting from exponential increases in data size .

Fibre Channel is a layered connectivity standard, as illustrated in Figure 4-3. It demonstrates the channel characteristics of an I/O bus, the flexibility of a network, and the scalability potential of MIMD computer architectures.

In implementation, fibre channel uses a serial connectivity scheme that allows for the highest-level bandwidth of any connectivity solution available today, 10gigbit. This architecture allows for implementations to reach as high as 200MB/sec burst rate for I/O operations, with aggregate rates depending on workload and network latency considerations. Regardless of the latency issues, this is a tremendous enhancement to throughput over traditional bus connectivity.

FC operates on a serial link design and uses a packet type of approach for encapsulation of the user data. FC transmits and receives these data packets through the node participants within the fabric. Figure 4-4 shows a simplified view of the FC fabric transmission from server node to storage node. The packets shipped by FC are called frames and are made up of header information, including addresses, the user data at an incredible 2,048 bytes, 2k bytes per frame, and ERC information.

As we discussed earlier in Chapter 2, these systems form the foundation for Massively Parallel Processing (MPP) systems. Each node is connected to a high-speed interconnect and communicates with all nodes within the system (see Figure 4-5). These self-contained computer nodes work together, or in parallel, on a particular workload. These systems generally have nodes that specialize in particular operations, such as database query parsing and preprocessing for input services. Other nodes share the search for data within a database that is distributed among nodes specializing in data access and ownership. The sophistication of these machines sometimes outweighs their effectiveness, given that they require a multi-image operating system, for example an OS on each node, sophisticated database, and storage functions to partition the data throughout the configuration, and finally, the speed, latency, and throughput of the interconnect. In these systems, both workload input processing and data acquisition can be performed in parallel, providing significant throughput increases. 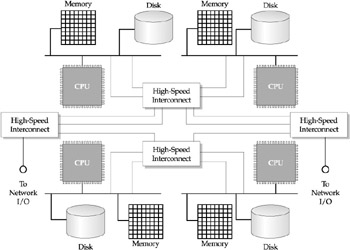 Each of these seemingly disparate technologies evolved separately: fabrics coming from developments in the network industry, Fibre Channel resulting from work on scientific device interconnects, and 'shared nothing' architectures arising from parallel processing advancements and developments in the VLDB technologies. Directing these technologies toward storage formed an entirely new network that provides all the benefits of a fabric, the enhanced performance of frame-level protocols within Fibre Channel, and the capability for multiple application and storage processing nodes to communicate and share resources.