Prior to the days of Windows networking, Java downloads, and the commercialization of the ARPANET, early users of computer networks worked within the UNIX operating system environments. ARPANET, incidentally, was the global Internets progenitor; it stood for Advanced Research Projects Agency Network, an agency of the U.S. Department of Defense. As their networks and applications grew, they found the problem of storage an increasing frustration. Providing storage on ones own workstation that was shared within the network could be hazardous to your work as well as to the users that shared that data. Accessing storage on someone elses workstation was just as frustrating, especially if they had left and turned off their computer for the night (see Figure 3-1). 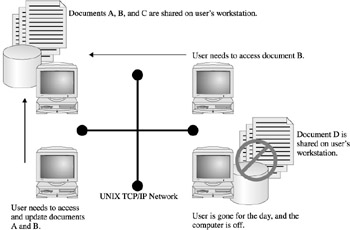 Then an idea occurred to them. If users are going to share files, why not simply dedicate a computer to house large and shared files? For example, a computer connected to an existing network could have storage space shared with users throughout the network. Thats exactly how early networked UNIX environments evolved to share data and depend on a file Server, as depicted in Figure 3-2. 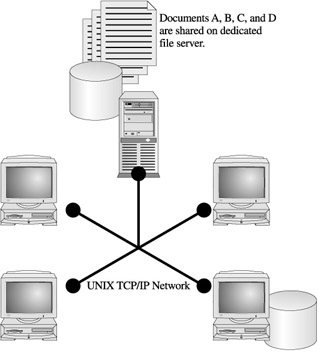 Given that working environment, the next logical step was the innovation of a server optimized for file I/O. The reasoning was that additional overhead for the operating system wasnt needed; the server should have the capacity for larger disk storage space, and be reliable most of the time. Any additional functionality that a user might require, like running other applications, or displaying and using graphic functions, wouldnt be needed.

Thus, its necessary that a computer used in this fashion incorporate a large amount of disk storage to be integrated with a thin OS that only does I/O, and that it can be attached to existing networks. In addition, it should allow users to access their files on this special server as if the files were on their own workstation, essentially allowing the files to be shared with other users throughout the network. As UNIX environments became the platform for innovationdue to its unrestricted code base, use with academic communities, and virtually free price tagthe setting for the development of an optimized network file server was put in motion.