The concept of mutual exclusion is a crucial one in operating systems development. It refers to the guarantee that one, and only one, thread can access a particular resource at a time. Mutual exclusion is necessary when a resource doesn't lend itself to shared access or when sharing would result in an unpredictable outcome. For example, if two threads copy a file to a printer port at the same time, their output could be interspersed. Similarly, if one thread reads a memory location while another one writes to it, the first thread will receive unpredictable data. In general, writable resources can't be shared without restrictions, whereas resources that aren't subject to modification can be shared. Figure 3-17 illustrates what happens when two threads running on different processors both write data to a circular queue. 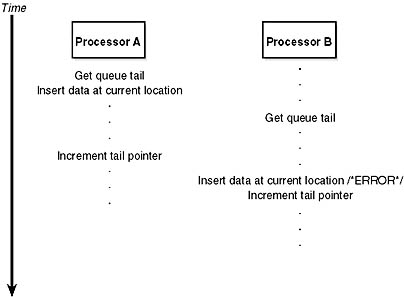 Sections of code that access a nonshareable resource are called critical sections. To ensure correct code, only one thread at a time can execute in a critical section. While one thread is writing to a file, updating a database, or modifying a shared variable, no other thread can be allowed to access the same resource. The pseudocode shown in Figure 3-17 is a critical section that incorrectly accesses a shared data structure without mutual exclusion.

The issue of mutual exclusion, although important for all operating systems, is especially important (and intricate) for a tightly coupled, symmetric multiprocessing (SMP) operating system such as Windows 2000, in which the same system code runs simultaneously on more than one processor, sharing certain data structures stored in global memory. In Windows 2000, it is the kernel's job to provide mechanisms that system code can use to prevent two threads from modifying the same structure at the same time. The kernel provides mutual-exclusion primitives that it and the rest of the executive use to synchronize their access to global data structures.

In the following sections, you'll find out how the kernel uses mutual exclusion to protect its global data structures and what mutual-exclusion and synchronization mechanisms the kernel provides to the executive that it, in turn, provides to user mode.

At various stages during its execution, the kernel must guarantee that one, and only one, processor at a time is executing within a critical section. Kernel critical sections are the code segments that modify a global data structure such as the kernel's dispatcher database or its DPC queue. The operating system can't function correctly unless the kernel can guarantee that threads access these data structures in a mutually exclusive manner.

This strategy is fine for a single-processor system, but it's inadequate for a multiprocessor configuration. Raising the IRQL on one processor doesn't prevent an interrupt from occurring on another processor. The kernel also needs to guarantee mutually exclusive access across several processors.

The mechanism the kernel uses to achieve multiprocessor mutual exclusion is called a spinlock. A spinlock is a locking primitive associated with a global data structure, such as the DPC queue shown in Figure 3-18. 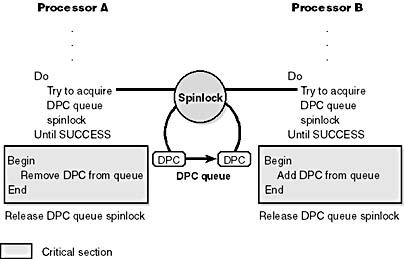 Spinlocks, like the data structures they protect, reside in global memory. The code to acquire and release a spinlock is written in assembly language for speed and to exploit whatever locking mechanism the underlying processor architecture provides. On many architectures, spinlocks are implemented with a hardware-supported test-and-set operation, which tests the value of a lock variable and acquires the lock in one atomic instruction. Testing and acquiring the lock in one instruction prevents a second thread from grabbing the lock between the time when the first thread tests the variable and the time when it acquires the lock.

All kernel-mode spinlocks in Windows 2000 have an associated IRQL that is always at DPC/dispatch level or higher. Thus, when a thread is trying to acquire a spinlock, all other activity at the spinlock's IRQL or lower ceases on that processor. Because thread dispatching happens at DPC/dispatch level, a thread that holds a spinlock is never preempted because the IRQL masks the dispatching mechanisms. This masking allows code executing a critical section protected by a spinlock to continue executing so that it will release the lock quickly. The kernel uses spinlocks with great care, minimizing the number of instructions it executes while it holds a spinlock.

NOTE Because the IRQL is an effective synchronization mechanism on uniprocessors, the spinlock acquisition and release functions of uniprocessor HALs don't implement spinlocks—they simply raise and lower the IRQL.

The kernel makes spinlocks available to other parts of the executive through a set of kernel functions, including KeAcquireSpinlock and KeReleaseSpinlock. Device drivers, for example, require spinlocks in order to guarantee that device registers and other global data structures are accessed by only one part of a device driver (and from only one processor) at a time. Spinlocks are not for use by user programs—user programs should use the objects described in the next section.

Kernel spinlocks carry with them restrictions for code that uses them. Because spinlocks always have an IRQL of DPC/dispatch level or higher, as explained earlier, code holding a spinlock will crash the system if it attempts to make the scheduler perform a dispatch operation or if it causes a page fault.

The fact that queued spinlocks result in spinning on per-processor flags rather than global spinlocks has two effects. The first is that the multiprocessor's bus isn't as heavily trafficked by interprocessor synchronization. The second is that instead of a random processor in a waiting group acquiring a spinlock, the queued spinlock enforces first-in, first-out (FIFO) ordering to the lock. FIFO ordering means more consistent performance across processors accessing the same locks.

Microsoft hasn't converted all the kernel's locks to queued spinlocks, just the half-dozen or so locks that protect the core data structures of the kernel, such as the cache manager's database, the scheduler's thread database, and the memory manager's physical memory database.

Executive software outside the kernel also needs to synchronize access to global data structures in a multiprocessor environment. For example, the memory manager has only one page frame database, which it accesses as a global data structure, and device drivers need to ensure that they can gain exclusive access to their devices. By calling kernel functions, the executive can create a spinlock, acquire it, and release it.

Spinlocks only partially fill the executive's needs for synchronization mechanisms, however. Because waiting on a spinlock literally stalls a processor, spinlocks can be used only under the following strictly limited circumstances:

These restrictions are confining and can't be met under all circumstances. Furthermore, the executive needs to perform other types of synchronization in addition to mutual exclusion, and it must also provide synchronization mechanisms to user mode.

One other type of executive synchronization object worth noting is called executive resources. Executive resources provide both exclusive access (like a mutex) as well as shared read access (multiple readers sharing read-only access to a structure). However, they're available only to kernel-mode code and thus aren't accessible from the Win32 API. Executive resources are not dispatcher objects but rather data structures allocated directly from nonpaged pool that have their own specialized services to initialize, lock, release, query, and wait on them. The executive resource structure is defined in Ntddk.h, and the executive support routines are documented in the DDK reference documentation.

The remaining subsections describe the implementation details of waiting on dispatcher objects.

A thread can synchronize with a dispatcher object by waiting on the object's handle. Doing so causes the kernel to suspend the thread and change its dispatcher state from running to waiting, as shown in Figure 3-19. The kernel removes the thread from the dispatcher ready queue and no longer considers it for execution.

NOTE Figure 3-19 is a process state transition diagram with focus on the ready, waiting, and running states (the states related to waiting on objects). The other states are described in Chapter 6. 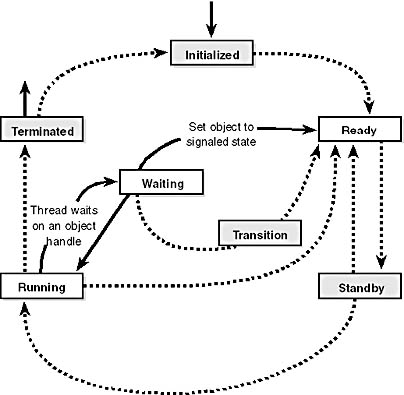 Figure 3-19 Waiting on a dispatcher object

At any given moment, a synchronization object is in one of two states: either the signaled state or the nonsignaled state. A thread can't resume its execution until the kernel changes its dispatcher state from waiting to ready. This change occurs when the dispatcher object whose handle the thread is waiting on also undergoes a state change, from the nonsignaled state to the signaled state (when a thread sets an event object, for example). To synchronize with an object, a thread calls one of the wait system services the object manager supplies, passing a handle to the object it wants to synchronize with. The thread can wait on one or several objects and can also specify that its wait should be canceled if it hasn't ended within a certain amount of time. Whenever the kernel sets an object to the signaled state, the kernel's KiWaitTest function checks to see whether any threads are waiting on the object. If they are, the kernel releases one or more of the threads from their waiting state so that they can continue executing.

The following example of setting an event illustrates how synchronization interacts with thread dispatching:

What Signals an Object

When choosing a synchronization mechanism, a program must take into account the rules governing the behavior of different synchronization objects. Whether a thread's wait ends when an object is set to the signaled state varies with the type of object the thread is waiting on, as Table 3-9 illustrates.

Table 3-9 Definitions of the Signaled State

When an object is set to the signaled state, waiting threads are generally released from their wait states immediately. Some of the kernel dispatcher objects and the system events that induce their state changes are shown in Figure 3-20. 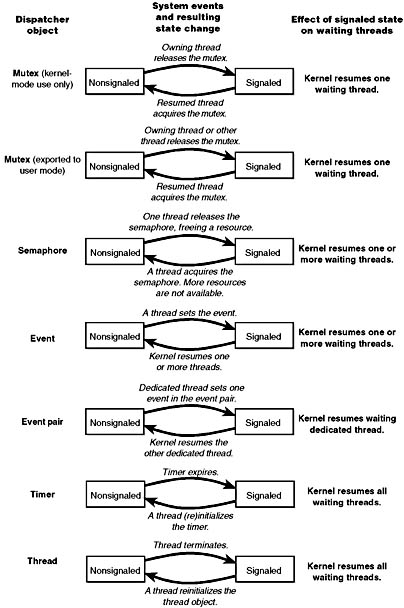 For example, a notification event object (called a manual reset event in the Win32 API) is used to announce the occurrence of some event. When the event object is set to the signaled state, all threads waiting on the event are released. The exception is any thread that is waiting on more than one object at a time; such a thread might be required to continue waiting until additional objects reach the signaled state.

In contrast to an event object, a mutex object has ownership associated with it. It is used to gain mutually exclusive access to a resource, and only one thread at a time can hold the mutex. When the mutex object becomes free, the kernel sets it to the signaled state and then selects one waiting thread to execute. The thread selected by the kernel acquires the mutex object, and all other threads continue waiting.

This brief discussion wasn't meant to enumerate all the reasons and applications for using the various executive objects but rather to list their basic functionality and synchronization behavior. For information on how to put these objects to use in Win32 programs, see the Win32 reference documentation on synchronization objects or Jeffrey Richter's Programming Applications for Microsoft Windows.

Two data structures are key to tracking who is waiting on what: dispatcher headers and wait blocks. Both these structures are publicly defined in the DDK include file Ntddk.h. The definitions are reproduced here for convenience: 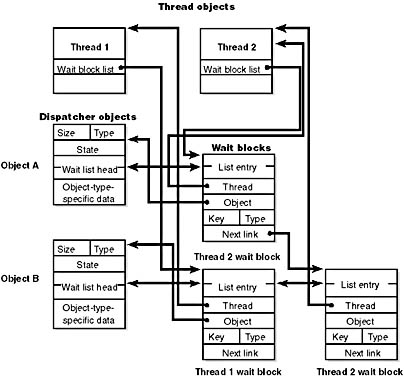 Although many process viewer utilities indicate whether a thread is in a wait state (and if so, what kind of wait), you can see the list of objects a thread is waiting on only with the kernel debugger !thread command. For example, the following excerpt from the output of a !process command shows that the thread is waiting on an event object:

Although the kernel debugger doesn't have a command for formatting the contents of a dispatcher header, we know the layout (described in the previous section "Data Structures") so we can interpret its contents manually:

From this, we can ascertain that no other threads are waiting on this event object because the wait list head forward and backward pointers (the third and fourth 32-bit values) point to the same location (a single wait block). Dumping the wait block (at address 0x8061809c) yields the following: