After you understand how to identify computer evidence and you know what equipment you can access, you are ready to begin collecting it. The steps you take in the collection process determine whether the evidence will be useful to you once the investigation is complete. You must ensure your evidence was acquired properly and is pristine. This section discusses several concepts necessary to ensure that collected evidence will be valid for later use.

All evidence presented in a court of law must exist in the same condition as it did when it was collected. Simply put, evidence cannot change at all once you collect it; the evidence must be in pristine condition. You'll be required to prove to the court that the evidence did not change during the investigation. Yes, you'll have to provide your own evidence that all collected evidence exists, without changes, as it did when it was collected. The documentation that chronicles every move and access of evidence is called the chain of custody . The chain starts when you collect any piece of evidence.

Documentation of all the steps that evidence has taken from the time it is located at the crime scene to the time it's introduced in the courtroom. All steps include collection, transportation, analysis, and storage processes. All accesses of the evidence must be documented as well.

Each step in the chain of custody must have specific controls in place to maintain the integrity of the evidence. The first control could be to take pictures of the evidence's original state. This, of course, is only applicable for real evidence. Once you photograph and/or document the initial state of the entire scene, you can begin to collect evidence.

From the very first step, you must list all procedures you use in the collection process and be ready to justify all your actions. For example, when you collect a disk drive for analysis, you must carefully follow standard practices regarding disk identification, removal, handling, storage, and analysis. Each step in the evidence collection and handling process must have at least one associated control that preserves the state of the evidence.

Continuing our disk drive evidence example, you must use proper handling techniques when handling disk drives , and you must also document each step in the process. Before you start, you want to take precautions against disk drive damage. Such precautions might include:

You'll also need to implement and document all controls that prevent accidental changes to the evidence. These precautions might include:

Needless to say, you need to plan each step of the way. At each step, make sure at least one control is in place to ensure your evidence stays pristine and unaltered. The upcoming section titled 'Leave No Trace' will cover some specific controls; however, the preceding list gives you an idea of the level of detail that is required to satisfy a court of law that the evidence has not changed since it was collected.

The following steps are an example of how to handle a disk drive you suspect contains evidence:

The previous steps are illustrated in the following graphic. 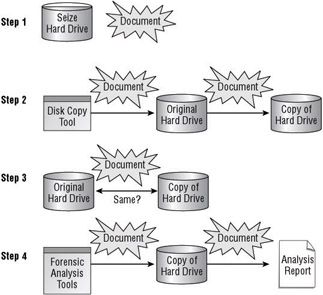 The computer forensics expert is often called on to save the day, even when that 'day' occurred over a year and a half ago.

The statute of limitations for sexual harassment can range from as few as 30 days for federal employees to as long as three years in certain states. After being contacted by the senior management of a small publicly traded company located in a state that extends the statute of limitations, I boarded a flight to see if I could help locate evidence that was over 18 months old.

As is the norm in a majority of businesses, when the complaining employee left the company, the employee's desktop computer hard disk had been reformatted, reloaded, and the computer had been assigned to another employee. The company CIO was able to track down the computer and presented it to me to see what I could locate. By this time, the computer had been in use by another employee for almost 15 months. The senior manager's laptop computer was lost six months earlier. In addition, the company recently implemented a new installation of Microsoft Exchange and had no backup tapes of the old e-mail server.

I imaged the hard drive using the Image MASSter Solo 2 Forensics Portable Evidence Seizure Tool from Intelligent Computer Solutions and created a new case file using AccessData's Forensic Toolkit (FTK). I added the acquired image of the hard disk as evidence in the case file in FTK and then indexed the case. After this prep work, things happened quickly.

I located more than enough information to show the relationship was mutual. When presented with all the evidence, the employee dropped the lawsuit. This case illustrates that potential evidence can be found on computers even after long periods of time have elapsed, if the investigator takes the time and knows how to look for it.

The first item in your hands when you enter a crime scene is a camera, and the second item should be a pencil. The key to providing a chain of custody that a court will accept is meticulous documentation. You must enter notes into an evidence log, listing all information pertinent to the access of the evidence. Each and every time evidence is accessed (including initial collection) the evidence log should contain at least the following information:

This log provides the court with a chain that can be traced back to the point at which the evidence was collected. It provides the beginning of the assurance that the evidence has not changed from its original state. The next step in the process is to justify that each step in the chain was carried out according to industry best practices and standards. Once you establish that you have handled evidence in an appropriate manner and maintained the integrity of the evidence, you are ready to take it to court.

Before you take evidence to court, you need to ensure it will be acceptable. In the next section, we cover the rules that govern what evidence is admissible in a court of law.