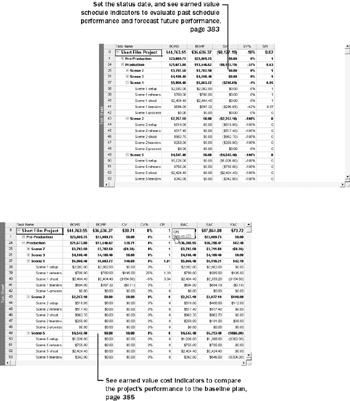 Looking at task and resource variance throughout a project’s duration is an essential project management activity, but it does not give you a complete picture of the project’s long-term health. For example, a task might be over budget and ahead of schedule (possibly not good) or over budget and behind schedule (definitely not good). Viewing schedule or cost variance alone does not tell you much about performance trends that might continue for the duration of the project.

The main differences between earned value analysis and simpler schedule and cost variance analysis can be summed up like this:

The difference is subtle but important. Here is an example. Let’s say a project has a baseline duration of 160 days and a budget of $82,000. After about half of the baseline duration has elapsed, the actual costs incurred are about $40,000. But what is the project’s status? You cannot tell based on this information alone. A simple distribution of cost over time would suggest that $40,000 spent by the midpoint of an $82,000 project is just about right. But perhaps the project is running ahead of schedule—more work has been completed by midpoint than planned. That would be good news; the project might finish ahead of schedule. On the other hand, the project might be running behind schedule—less work has been accomplished than was planned. This would be bad news; the project will likely miss its planned finish date, exceed its budget, or both.

Earned value analysis enables you to look at project performance in a more sophisticated way. It helps you to determine two important things: the true cost of project results to date and the performance trend that is likely to continue for the remainder of the project.

Earned value analysis has its origins in large projects carried out for the U.S. government, and it remains an essential project status reporting tool for major government projects. However, because of the usefulness of earned value analysis in predicting future project performance, it is gaining popularity in the private sector and on smaller projects as well.

For Microsoft Office Project 2003 to calculate earned value amounts for a project plan, you must first do the following:

In this exercise, you set the status date and view earned value schedule indicators for the project plan.

You can use these schedule indicator values to address the question, “At the rate you’re making progress, is there enough time left to complete the project?” In the case of the short film project, one area to investigate is the low SPI for the production work completed thus far—and whether the cause of that problem is likely to affect the remaining production work.