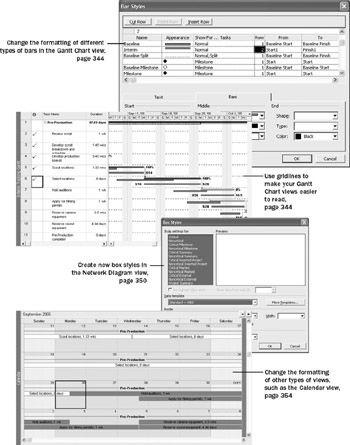 This chapter introduces you to some of the more advanced formatting features in Microsoft Office Project 2003. A well-formatted project plan is essential for communicating details to resources, customers, and other stakeholders. Some of the formatting capabilities in Project are similar to those of a style-based word processor such as Word, in which defining a style once affects all content in the document to which that style has been applied. In Project you can use styles to change the appearance of a specific type of Gantt bar, such as a summary bar, throughout a project plan. Other formatting options you’re introduced to in this chapter focus on the different ways of identifying tasks and formatting some of the more commonly used views.

In addition to changing the formatting of objects that appear by default in a Gantt chart view (such as a task’s Gantt bar), you can add or remove objects. For example, it may be useful to compare baseline, interim, and actual plans in a single view. Doing so helps you evaluate the schedule adjustments you have made.