The DataReader: Walking through the Data

As you saw previously, you call the ExecuteReader method of the Command object, which returns an instance of the DataReader. For example, you use the following code:

Reading with the DataReader

Once a DataReader is initialized, you can utilize its various methods to read your data records. Foremost, you can use the Read method, which, when called repeatedly, continues to read each row of data into the DataReader object. The DataReader also provides a simple indexer that enables you to pull each column of data from the row. Listing 4-17 is an example of using the DataReader in the Northwind database for the Customers table and displaying data on the console. 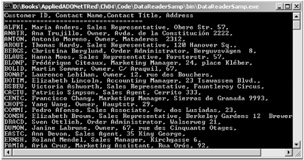 Figure 4-2: Output of the Customers table from the DataReader

SqlDataReader provides many Read methods, which allow you to get the value of a column as a specific type. For instance, you could rewrite this line from the previous example:

With the GetString method of CustomerID, you don't need to do any conversion, but you do have to know the zero-based column number of CustomerID (which, in this case, is zero).

The DataReader also has methods that enable you to read data from a batch of SQL queries. The following is an example of a batch transaction on the Customers and Orders tables. The NextResult method allows you to obtain each query result from the batch of queries performed on both tables. In this example, after creating a Connection object, you set up your Command object to do a batch query on the Customers and the Orders tables:

Now you can create the Reader through the Command object. You then use a result flag as an indicator to check if you've gone through all the results. Then you loop through each stream of results and read the data into a string until it reads 10 records. After that, you show results in a message box (see Listing 4-18).

After that you call the NextResult method, which gets the next query result in the batch. The result is processed again in the Read method loop. The code displays data from both tables.

The ExecuteReader method of a Command object such as SqlCommand has two over-loaded forms, as shown:

The first form doesn't take any arguments, but the second form takes an argument of type CommandBehavior. The Command behavior can control the action and return data as a result of executing a Command.

The default value passed in the ExecuteReader is CommandBehavior.Default, which returned the same results as ExecuteReader with no arguments.

When CommandBehavior.CloseConnection is passed in ExecuteReader, the associated Connection object is closed when the DataReader is closed. In this case, you don't have to call SqlConnection.Close explicitly.

By setting the CommandBehavior.KeyInfo value, the DataReader doesn't return data. It returns the table column and primary key information instead. This is useful when you're collecting metadata.