In Hour 6, you saw how to use the Command object in conjunction with the DataAdapter object to retrieve records from the database and place them into a DataSet . The DataSet was then bound to a Web control such as the DataGrid and displayed in a Web form. The code in Listing 8.1 is a review of the ADO.NET code required to perform these tasks .

Listing 8.1 Retrieving Records with the DataAdapter

Figure 8.1. The appearance of a Web form with bound Web controls. 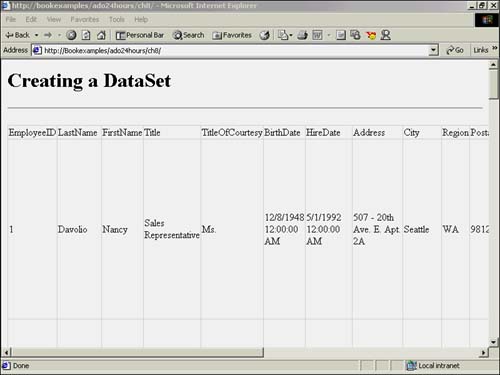 There is one problem with this method of retrieving data: The DataSet object exists in memory and contains all rows returned by your query. Suppose that you are retrieving a large number of records from the data source. For the brief amount of time it takes to bind the data to your form and send it to the user , you have a potentially large amount of memory consumed by the DataSet .

If you are only retrieving small DataSet s on a low-traffic site, this probably won't be of much concern. However, as the number of concurrent users of your application increases , the more important this issue becomes.

If you think of your data source as a water reservoir, you could envision the DataAdapter method of returning records as a man running back and forth between the source and destination with buckets (albeit very quickly). The DataReader is more like a firehose.