To create a Web service, create a file in your Web project entitled suppliers.asmx. The .asmx extension tells the .NET Framework that this file should be treated as a Web service. Copy and paste the code from Listing 24.1 (or Listing 24.2 if you prefer C#) into the file and save. That's it! You've created your first Web service, which you can view in a browser by navigating directly to the suppliers.asmx URL.

Next, several necessary namespaces are imported, just the same as in any Web form in this book. Then the Suppliers class is defined. The class inherits from the WebService class. The only difference is the WebMethod attribute specified before the publicly defined method. This specifies that the method is accessible as a Web method. The method is then defined. A DataSet is created and loaded with data from the Suppliers table in the Northwind database.

Listing 24.1 A Web Service That Returns All Suppliers in the Northwind Database in Visual Basic .NET

Listing 24.2 A Web Service That Returns All Suppliers in the Northwind Database in C#

The GetAllSuppliers() method in Listings 24.1 and 24.2 is the same data access code that you've seen many times throughout this book. A DataSet of all the suppliers in the Northwind database is generated. The DataSet is then returned as the output of the function. Web services transport data using XML. Because DataSet s are represented internally as XML, you do not need to do anything else! The DataSet will automatically transmit.

When you navigate to the suppliers.asmx URL, you will see a screen like the one in Figure 24.1. It contains some information about Web services in general and shows you all the public methods supported by the current Web service. Note that in this case, the only public method is GetAllSuppliers() .

Figure 24.1. An automatically generated information screen for your Web service. 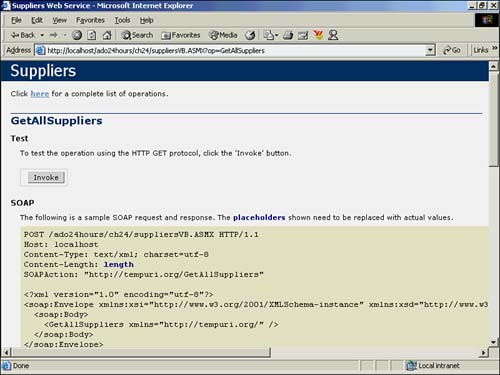 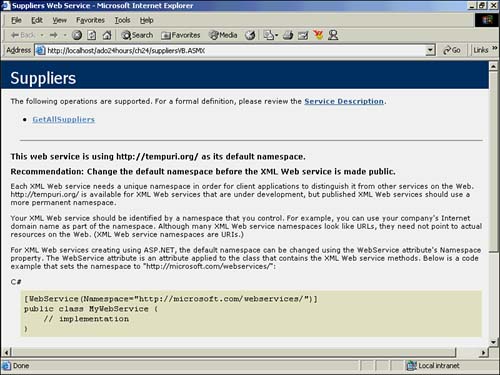 If you click on the Invoke button to test the Web service, you will navigate to a screen like the one in Figure 24.3. This is the actual information returned by the Web service. If you look closely at the data, you'll see that it is the XML representation of a dataset. Because Web services transmit data packaged in XML, it's pretty handy that datasets are XML entities! 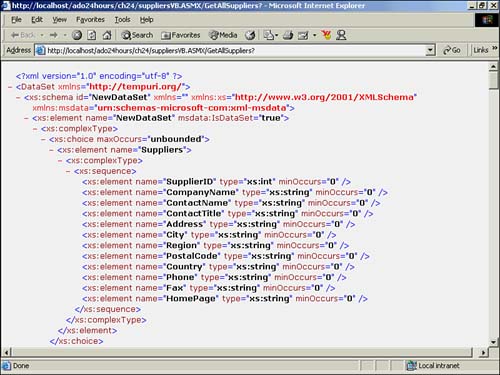 Now that you've created the Web service and ensured that it works by performing the tests, it's time to create a Web form that will use the DataSet returned from a remote machine to bind to a DataGrid .

MySQL Stored Procedure Programming
Making Sense of Change Management: A Complete Guide to the Models, Tools and Techniques of Organizational Change
Data Structures and Algorithms in Java
Practical Intrusion Analysis: Prevention and Detection for the Twenty-First Century: Prevention and Detection for the Twenty-First Century
Sap Bw: a Step By Step Guide for Bw 2.0
The Oracle Hackers Handbook: Hacking and Defending Oracle
flylib.com © 2008-2017.
If you may any questions please contact us: flylib@qtcs.net
Privacy policy
This website uses cookies. Click here to find out more.
Accept cookies