The vector processor provides a single control flow with serially executed instructions operating on both vector and scalar operands. The parallelism of this architecture is at the instruction level. Figure 2.1 depicts the architecture. Like the serial scalar processor the vector processor has only one IEU, and this IEU does not begin executing the next instruction until the execution of the current one is completed. Unlike the serial scalar processor, its instructions can operate both on scalar operands and on vector operands. The vector operand is an ordered set of scalars that is generally located on a vector register. 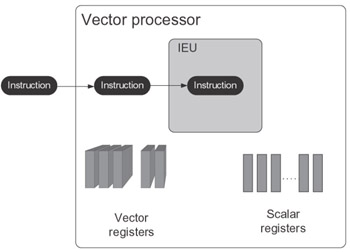 While a number of different implementations of this architecture exist, such as ILLIAC-IV, STAR-100, Cyber-205, Fujitsu VP 200, and ATC, probably the most elegant is the vector computer Cray-1 designed by Seymour Cray in 1976. Its processor employs a data pipeline to execute the vector instructions.

The idea of this approach is that the instruction to be executed performs some binary vector operation, say, multiplication, taking operands from vector registers a and b and putting the result on vector register c. Most vector operations, such as multiplication of two vector operands, are just elementwise extensions of the corresponding scalar operations. For example, in our case, ith element of the resulting vector c is equal to the product of ith elements of vectors a and b

This instruction is executed by a pipelined unit able to multiply scalars. The multiplication of two scalars is partitioned into m stages, and the unit can simultaneously perform different stages for different pairs of scalar elements of the vector operands. The execution of vector instruction c = a x b, where a, b, and c are n-element vector registers, by the pipelined unit can be summarized as follows:

In total, it takes n + m - 1 steps to execute this instruction. The pipeline of the unit is fully loaded only from the mth to the nth step of the execution. Serial execution of n scalar multiplications with the same unit would take n X m steps. Thus the speedup provided by this vector instruction is

If n is large enough, the speedup is approximately equal to the length of the unit’s pipeline, S ≈ m.