SQL Server 2005 provides us with seven data mining algorithms. Most of these algorithms perform several different tasks. Having a detailed understanding of the inner workings of each algorithm is unnecessary. Instead, this section provides a brief explanation of each to give you some background information. More important is the knowledge of what each can be used to accomplish.

The Microsoft Decision Trees algorithm is one of the easiest algorithms to understand because it creates a tree structure during its training process. (You probably already guessed that from the name.) The tree structure is then used to provide predictions and analysis.

Figure 12-11 shows a sample decision tree created by the Microsoft Decision Trees algorithm. In this tree, we are analyzing the relationship between various product attributes and likelihood to be a high seller. Each new attribute the algorithm processes adds a new branch to the tree. In the diagram, we have a binary tree. But, using an attribute with more than two values, it is possible to have a fork with more than two branches—a N-ary tree, if you like the lingo. 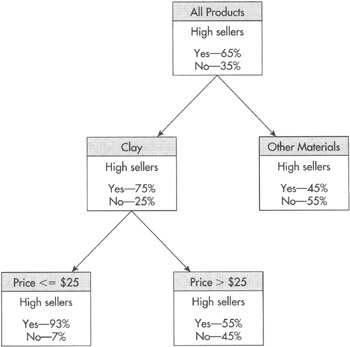 As each node in the tree is created, the attribute we will be predicting is examined in the training data set. In Figure 12-11, 75% of products made from clay were high sellers in the training data. Further down the tree, 93% of clay products costing $25 or less, were top sellers. If you were a member of the Maximum Miniatures planning team, what new types of new products would you emphasize? (If you said clay products costing under $25, all this talk about mathematical algorithms has not yet put you in stupor and you are definitely catching on.)

The main purpose of the Microsoft Decision Trees algorithm is

Microsoft's SQL Product Manager, Donald Farmer, claims because there is a Naïve Bayes algorithm, there must be a "deeply cynical" Bayes algorithm out there somewhere in data mining land. I guess it is needed to bring balance to data mining's version of the "force." We will try not to be too Naïve as we explore the benefits and shortcomings of this algorithm.

The Naïve Bayes algorithm can only be used for

Next on our list is the Microsoft Clustering algorithm.

The Microsoft Clustering algorithm builds clusters of entities as it processes the training data set. This is shown in Figure 12-13. Once the clusters are created, the algorithm analyzes the makeup of each cluster. It looks at the values of each attribute for the entities in the cluster. 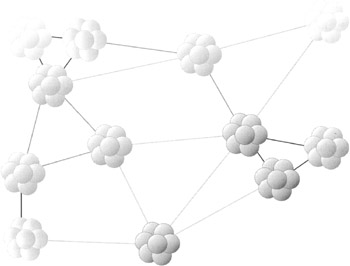 When we view the Microsoft Clustering algorithm in the Business Intelligence Development Studio, we see a diagram similar to Figure 12-13. By entering the attribute value we want, we can have the clusters color-coded according to the concentration of our desired value.

The main purpose of the Microsoft Clustering algorithm is

As the name suggests, the Microsoft Association algorithm is used for association. Therefore, to use this algorithm, we must have entities that are grouped into sets within our data. Refer to the section "Association" if you need more information.

The Microsoft Association algorithm creates its own sets of entities, and then determines how often those sets occur in the test data set. This is shown in Figure 12-14. In this set, we are looking at groupings of products purchased together in a single purchase transaction. To simplify our example, we are only looking at products in the World War II product subtype. 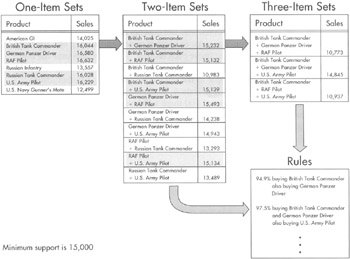 The Microsoft Association algorithm begins by creating one-item sets. You may think it takes more than one item to make a set, but just set that aside for a moment. This algorithm then looks at how many times a purchase included the item in each one-item set.

Next, the algorithm determines which sets were popular enough to go on to the next level of analysis. For this, a particular threshold, or minimum support, is used. In Figure 12-14, the minimum support required is 15,000. In other words, a particular set must be present in at least 15,000 purchases in the test data set to move on. In our example, British Tank Commander, German Panzer Driver, RAF Pilot, Russian Tank Commander, and U.S. Army Pilot have the minimum support required.

Once the sets are created, the algorithm creates membership rules based on the result. The algorithm determined that 16,044 purchases included the British Tank Commander. Of those purchases, 15,232 or 94.9% also included the German Panzer Driver. This becomes a rule for predicting future associations. In the future, when someone puts the British Tank Commander in their shopping cart, 95 times out of 100, they will also include the German Panzer Driver in the same purchase.

The Microsoft Association algorithm can only be used for 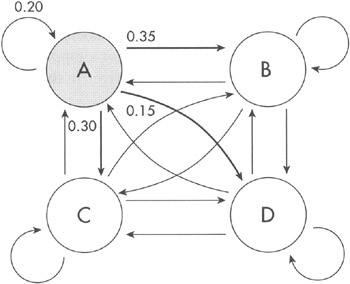 The main purpose of the Microsoft Sequence Clustering algorithm is

The Microsoft Time Series algorithm is used for analyzing and predicting time-dependent data. It makes use of a structure called an autoregression tree, developed by Microsoft.

The Microsoft Time Series algorithm starts with time-related data in the test data set. In Figure 12-16, this is sales data for each month. To simplify things, we are only looking at data for two products in our example. 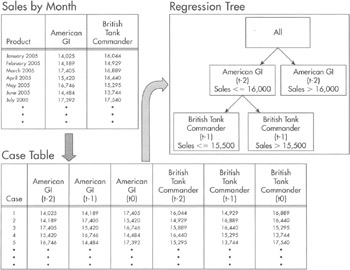 The algorithm then uses the data in this pivot table to come up with mathematical formulas that use the numbers from the (t-1) and (t-2) columns to calculate the number in the (t0) column for each product. Don't ask me how it does this, but it does it. Using these formulas, we can predict the sales values for a product into the future.

Don't worry; we don't need to know how to create autoregression trees or the formulas they contain. All we need to know is how to use them. We will see how to do this in Chapter 13 and Chapter 14.

The Microsoft Time Series algorithm can only be used for

Neural networks were developed in the 1960s to model the way human neurons function. Microsoft has created the Microsoft Neural Network algorithm, so we can use neural networks for such mundane activities as predicting product sales. Of course, predicting product sales might not seem so mundane if your future employment is dependent on being correct.

The Microsoft Neural Network algorithm creates a web of nodes that connect inputs derived from attribute values to a final output. This is shown in Figure 12-17. Each node contains two functions. The combination function determines how to combine the inputs coming into the node. Certain inputs might get more weight than others when it comes to affecting the output from this node 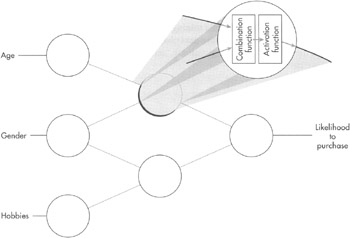 Again, don't ask me how the algorithm comes up with the functions for each node. Some very smart people at Microsoft and elsewhere figured that out for us already. All we need to do is use the algorithm and reap the rewards.

The main purpose of the Microsoft Neural Network algorithm is